Rizwana Tabassum and the Quest for Human Rights

Human Rights Day is observed by the international community every year on 10 December, and proclaims the basic rights everyone is inherently entitled to as a human being irrespective of race, colour, religion, sex, language, political or other opinion, national or social origin, property, birth or other status. Six months after our friend and accomplished journalist Rizwana Tabassum left us, we try to make sense of the death of a friend and colleague, a single Muslim woman, from a town in Uttar Pradesh, and how it puts the abstraction of human rights and violence against women in stark perspective. 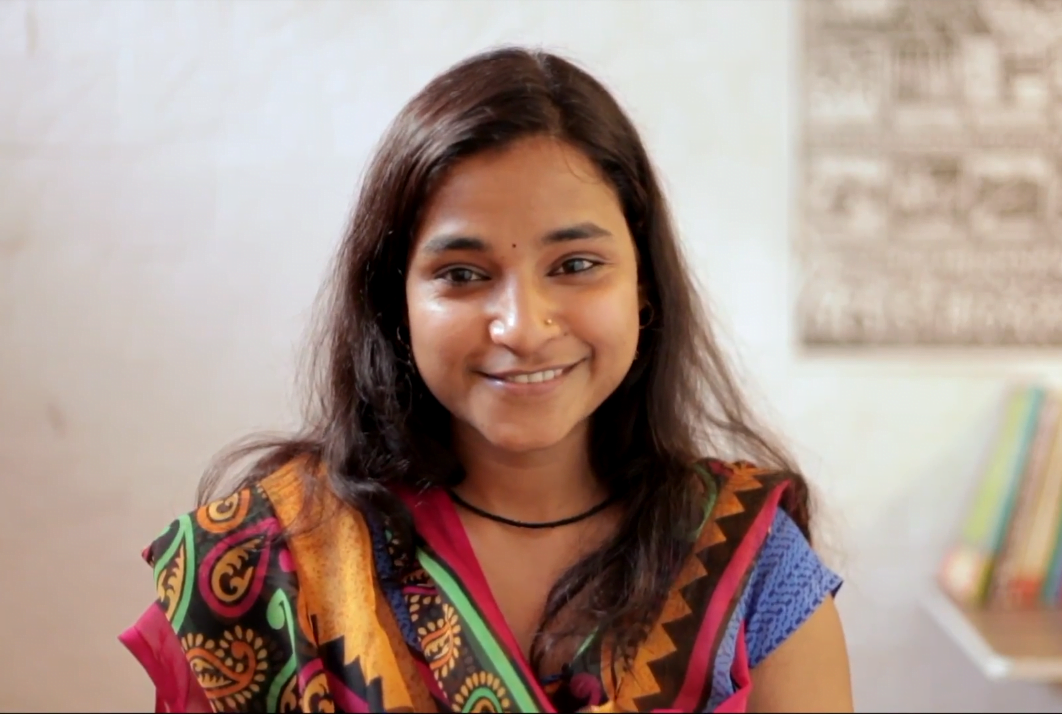 Six months after she died, and in the week of her birthday (she would have turned 29), I’ve been trying to not dig out emails from Rizwana. Unsuccessfully.

There are few weeks over the last six months that I have not thought about her: she plays foil to the intense combination of  resilience and despair that 2020 has been. Her death has been a constant reminder of how important this work is, of amplifying voices on the ground, of enabling women to speak truth to power, wherever and whoever they are. And also a reminder of how fragile are all our individual and collective efforts to shift the terms of our lives, our worlds

This week, I can’t extricate the memory of her extreme enthusiasm about her birthday, from the somewhat tedious content that we always see around human rights day, and the end of the 16 Days campaign on violence against women. The death of a friend and colleague, a single Muslim woman, from a town in Uttar Pradesh, puts the abstraction of human rights and violence against women in stark perspective. What is the impact of all we do, and at the end, what are the ways to measure ‘human rights’? Away from international and national agendas of progress, away from the patriarchal state and its aggressive missions of shakti. Shakti in whose hands, and for which ends?

I’ve been thinking of how Rizwana would have editorialized or reported on laws against love jihad in UP, on the police storming into inter-religious weddings and breaking them up, and on mission shakti. She who was the model daughter, the enthusiastic advocate of free and passionate love affairs. I’ve been thinking of how the complexity of her personality, and her growth as a journalist could be a record, a thick portrait of a woman finding and making human rights her own.

So I did trawl through emails and letters and drafts of stories she had written.

So many editorial and personal arguments. So many shayris. Minutes of meetings recording her stellar performance in the perfectly correct language. (You know how no one writes minutes in perfect language.)

She went from reporter to DTP operator, assistant editor, to social media producer, to video producer. In all, she was sharp, ambitious, with an eye on the glittering prize.

One December, after being pulled up for lacking creativity, and any interest in audience engagement, in her work as a social media producer, she sent an email in all the colours of the rainbow, about a new crowd-puller show she wanted to produce

It had a content break up of all the recent Bollywood releases and related gossip. And at the end, the credits:

She was not convinced that this was content she wanted to produce, and it showed, packed with cliches as it was, but if it had to be produced, she would do it and own it too. That was Rizwana.

If feminism is a vague and slippery thing, only learnt in the painful, exhilarating practice of it, often dismissed as urban and elite, Rizwana is one of the people in my life who taught me some things about it.

She was outspoken, was Rizwana. And she also had an acute sense of hierarchy and power. Who held it, how it shifted, and whose good books to be in. She held the balance of resisting and remaining true to structures of power quite uniquely. With humour and childishness, which never quite masked the intelligence that lurked backstage. It meant that she was good at getting her way. Tickets for the IPL from a colleague’s brother; a meeting and personal note from John Abraham; a dress of white banarasi organza from Abbu’s loom that would give Victorian puffs and ruffles a run for their money.

Her relationship with her abbu, her father, was one illustration of her understanding of power. They were close, and he was intensely supportive of her education, her career. In her heart, I think she always knew her father would be on her side; yet each milestone of boundary pushing – going to college, attending a residential training, travelling for a workshop, relocating for work – was carefully and respectfully put to him to consider, to reject. Mediators were brought in, so the point of confrontation was not the disobedient, defiant daughter (this was a role she rejected outright), but the buffer in between, who reasoned, vindicated Rizwana’s right to step outside the golden boundary. And he always said, yes, just take care of her.

When he had a stroke a few years after she moved away from home, I got to know a taut, ash-faced Rizwana I had never seen before: her independence and ambition in a new tussle with her sense of responsibility for abbu; her need to take care of the parent, physically and financially, familiar, older than her years, definitely older than the playful, impetuous Rizwana we had always known.

I was her local guardian for many years. My initial discomfort with being accountable for a firebrand was assuaged by Rizwana’s very astute understanding of the dynamics of the austere hostel where she stayed. If she flouted hostel rules by talking on the phone beyond 9 pm, by reading all night, she also ensured that she won over the sisters who were her wardens with her humor and, in the end, respect of the rules that enabled her freedom to live away from home.

In the office, her disciplined fasting and namaz rubbed up against our discussions on keeping the office space secular and free of any norms that confined or oppressed women. Rizwana argued with us, she argued – quietly – with her Abbu and Ammi who insisted that daily fasting wasn’t a good idea for someone who was living and working independently; her health was quite fragile after a bad bout of jaundice. She grew thinner, and stayed steadfast: she drew the lines around which of her rights and values were open for discussion. 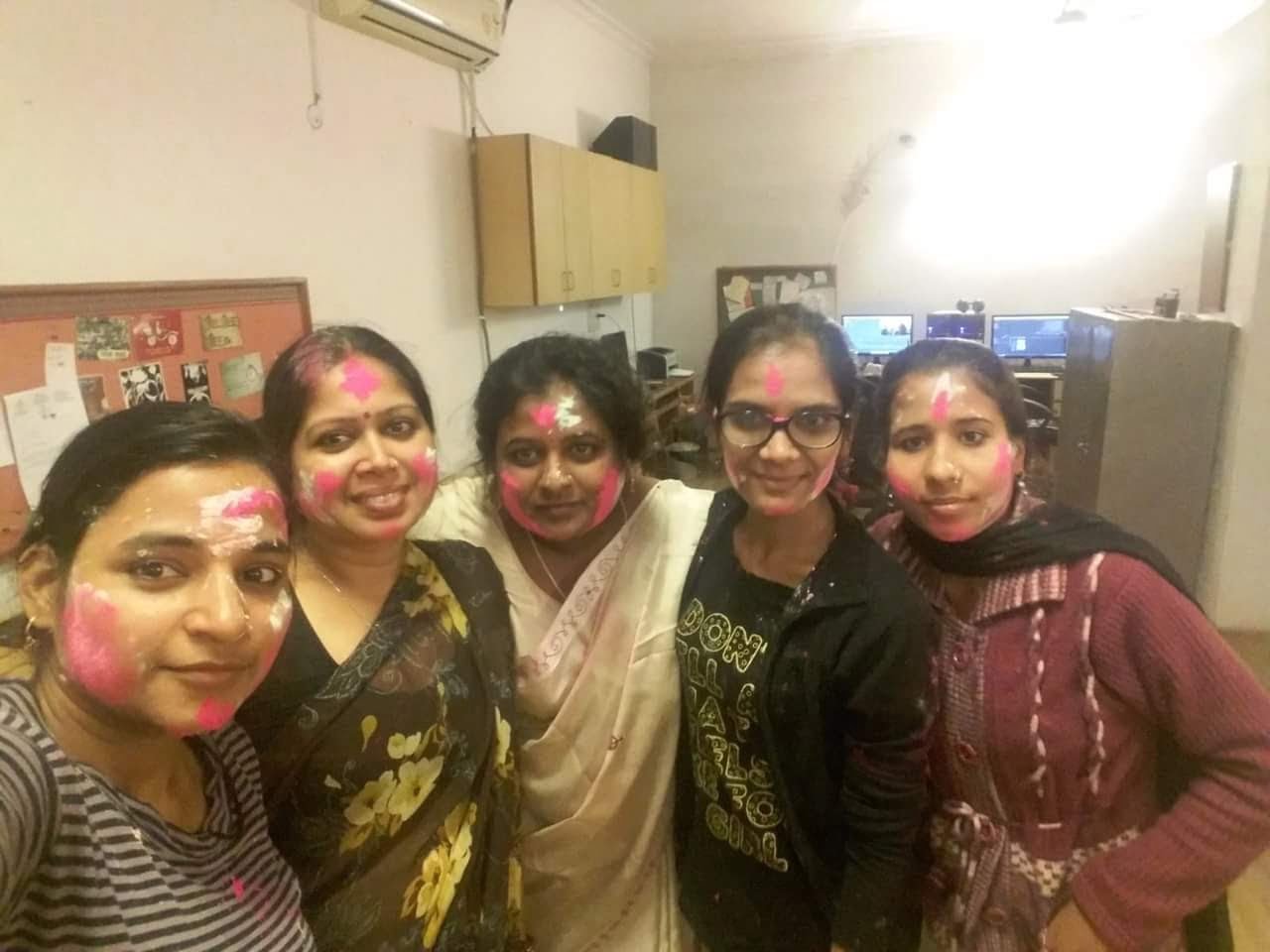 (L-R): Rizwana, with her KL colleagues at a Holi party in the Delhi newsroom

I think it was her close reading of power which made her a good journalist, even though it took me years to see this, and with many arguments about her lack of interest in ‘field work’. There are reporters and there are reporters. Rizwana was a smart one, she knew which stories had scope to scale, to travel, to have impact. If as a rookie, we had to pull her kicking and screaming out of home and into the villages surrounding her home town to report on infrastructure and governance; over the last few years of her life, she developed the ability to recognise the stories that would have impact, the field work that made her reports distinct, and the sharp perspective that made publication after publication enlist her as an important voice of her – our – times.

If much has not changed or improved, in the way that Rizwana’s home state sees those communities most marginalized, sees girls and women; in how it insists on the feudal ways of life that scoff at modern or politically correct rights of liberty and equality – women like Rizwana show us that the meaning of human rights, and the rights of women, is a very tangible, material quest. In life, and death.

Happy birthday, Rizwana. Wherever you are.