As we bid farewell to another Dalit History Month, here’s why it’s vital to remember that casteism is as alive and well in rural India as much as the IIT’s 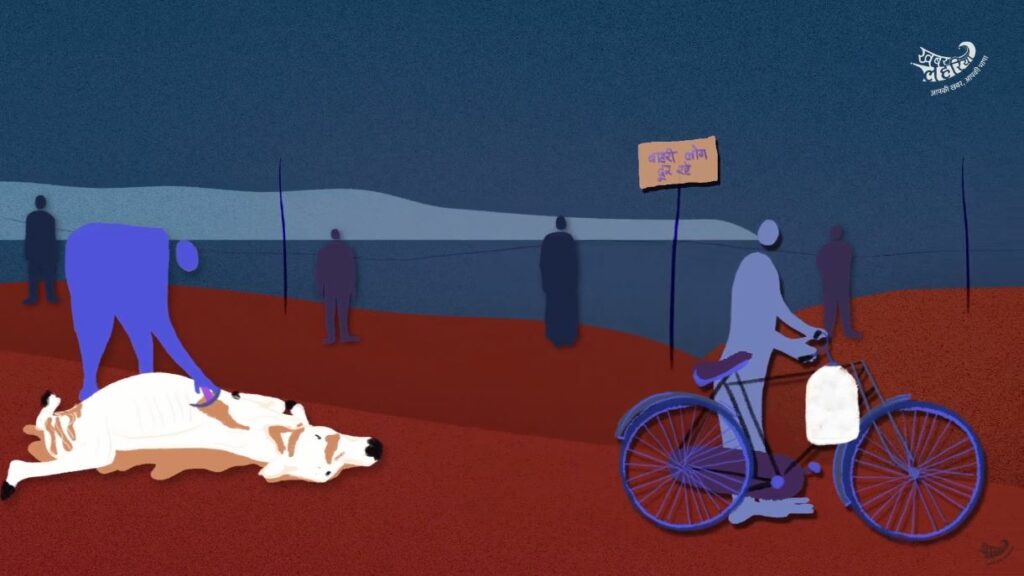 While India battles a devastating second wave of Covid-19, a video of a Zoom class taken by IIT Kharagpur professor Seema Singh went viral earlier this week, where she can be purportedly seen abusing her students who are mostly from SC, ST & OBC communities and calling them “bloody bastards” among many other profanities. The incident has led to widespread outrage and calls for her immediate sacking. Many in the Bahujan community and students across various colleges have come out strongly opposing her misbehaviour. In another video shared by the students, the professor can be clearly seen daring students to complain to the “minority affairs committee” or the “ministry of education”, showing her blatant disregard for and supposed immunity from the Scheduled Caste and Scheduled Tribe (Prevention of Atrocities) Act.

Elsewhere, far away from virtual classrooms and Twitter trends, caste-based discrimination continues to thrive in many shapes and forms in the hinterlands of India, often without the recourse provided by social media callouts, let alone legal remedies. Khabar Lahariya’s reportage through its almost 20-year-long experience and through the entirety of last year is testament to how entrenched casteism is in the lives of the most marginalised communities. After chronicling last year’s migrant exodus brought upon by an ill-planned nationwide lockdown, and how it was soon followed by a hunger crisis and crushing unemployment, we recently caught up with some of the Dalit migrants that had returned back home to Bundelkhand. About a month ago, the Asanghatit Mazdoor Morcha in Banda helped to rescue three families that had gotten trapped in the shackles of bonded labour after their return. One of the labourers, Seema, a young woman told us her ordeal. “We left for pradesh thinking we’ll earn a substantial amount and bring it back home for our families, but we could get nothing. All our dreams have been shattered. Are only the rich allowed to have dreams, to live? Poor people don’t have a place in society. It is a crime for  a poor person to dream of having a house, to send their kids to school, to dream of a comfortable life?”.

Last year, the gangrape and brutalisation of Manisha Valmiki, a Dalit woman in Uttar Pradesh’s Hathras led to a media storm, nay, hurricane, like few other such crimes have ever received in the past. At the same time, the government also published the National Crime Records Bureau data which revealed an overall increase in crimes against Dalits with Uttar Pradesh recording the highest number of crimes against the SC population. Khabar Lahariya’s editor-in-chief Kavita, , and bureau chief Meera travelled to Hathras to report on the frenzy around this case, and witnessed the basest human instincts of rapacity and avarice in the media and police personnel at the Valmiki household. It is as if the basic human dignity that was denied to Manisha Valmiki even in her hurried cremation, continued to be absent in the weeks that have followed . “We haven’t had a chance to cook or eat anything since morning”, said a close relative of the family to Kavita & Meera while their house was overrun by mediapersons. On being asked what the police said when they asked for their daughter’s corpse, her aunt relayed their helplessness. “We begged them numerous times but they didn’t let us see her. Bahut pair pakde unke lekin woh hamari nahi mane (we begged them on our knees but to no avail). Now we have lost our daughter, we have nothing.”

In another Valmiki colony in Banda, another kind of institutional apathy prevails. The population of the colony is around 1500, comprising mostly Domars and Khatiks, sub-castes of Valmikis, historically associated with manual scavenging and the disposal of excrement, and some Muslim households. While Covid-19 has heralded the age of sanitizers and the need for proper sanitization to keep infectious diseases at bay, the streets and sewers in this mohalla are still overflowing with garbage and excreta, and haven’t been cleaned since the last general election (Uttar Pradesh’s claim to Open Defecation Free status notwithstanding,)

Najpati, one of the residents of the Valmiki basti, voices his frustrations. “Modiji has started a cleanliness campaign for the entire country, but what has he done for our basti? Only he knows why he hasn’t employed anyone to clean our basti. They must be thinking since this is the basti of the jamadars they should be cleaning it themselves.” Soon after Prime Minister Narendra Modi picked October 2, 2020, Gandhi Jayanti, as the day he would declare India “manual scavenging free”, the Safai Karamchari Andolan, an advocacy group, cognizant of the PM’s plans, submitted data to the government on manual scavengers, who, even after Swachh Bharat, were still cleaning dry and insanitary latrines in many parts of the country. Eventually, the ministers-in-charge (correctly) decided that it might be too premature a declaration.

For the Dalit community, caste seems to permeate every part of life, ubiquitous in ways and customs that may have been outlawed but continue to be practised. Access to basic amenities necessary for life such as water, included. Kamta Kumar, from Chitrakoot tells us how casteism affects his family’s access to water in the parched lands of Bundelkhand. “The upper castes still practice untouchability, even for using hand pumps. It’s very common here. If me or any of my family goes [to that water source] over there we will be beaten with lathis first.” Jageer Singh, one of his neighbours from Kolamjara Chitrakoot sums up the political apathy as such. “Whenever the election season is upon us, we start getting calls from their office, promising various schemes, benefits even though we know by now that nobody will actually get anything. During election season all politicians will come with folded hands and ask for our votes. But when we need their help, even if it’s just their signature on a piece of paper that would make our lives easier, they are conveniently missing in action.” Telling words this April, the birth month of Dr B R Ambedkar, the architect of the Indian Constitution, and celebrated across India as Dalit History Month. Seventy one years since it came into effect, the constitutional rights and ideals that were meant to lift the Dalits out of their historical oppression remain unfulfilled, in rural India and beyond.