“Our mouths and throats are parched, they’re hurting”.

A Khabar Lahariya Live-in-Hathras report on the second round of violence the bereaved Valmiki family is being subjected to, courtesy of media & official authorities

“Our mouths and throats are parched, they’re hurting”. The family of the 19-year-old Dalit girl who was brutally murdered on Sep 19, a crime that has caught the nation’s headlines, repeats this line ad nauseum to the swarm of reporters that have descended upon their homes, second only to the burgeoning bevy of policemen allegedly posted at the site.

Khabar Lahariya’s editor-in-chief Kavita, (possibly the only female Dalit editor inducted into the Editors Guild of India), and bureau chief Meera witnessed the basest human instincts of rapacity and avarice in the media and police personnel at the Valmiki household. It is as if the basic human dignity that was denied to Manisha Valmiki even in her hurried cremation, continues to be absent in the weeks that have followed. 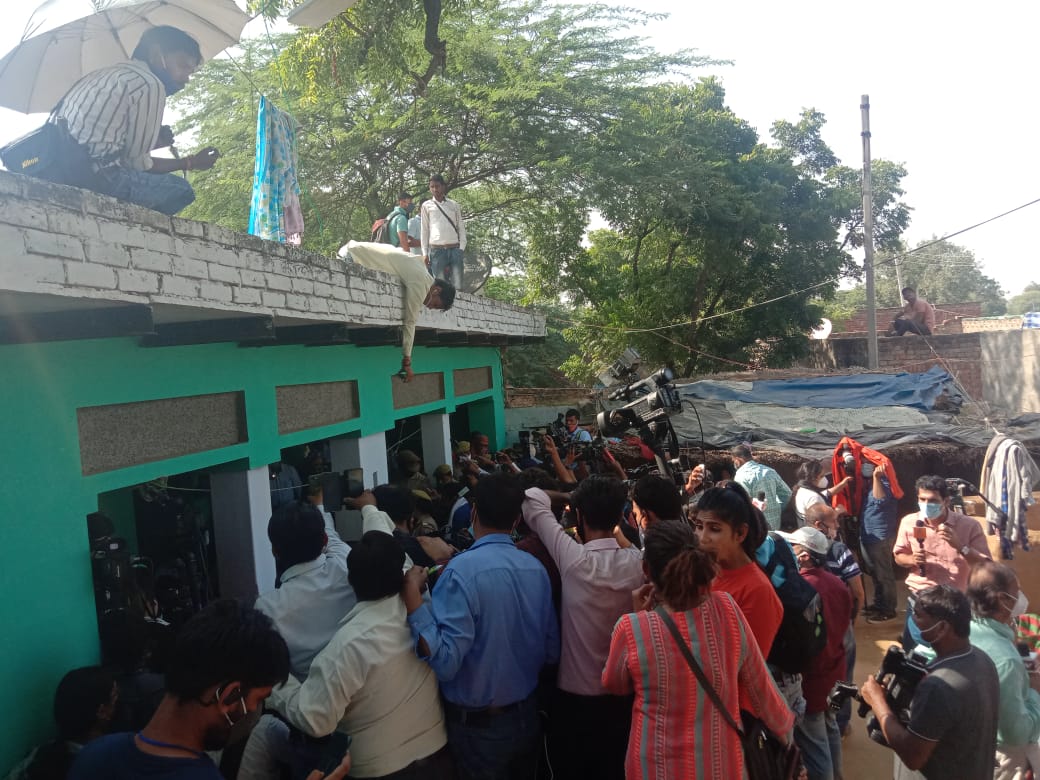 While well-known media personalities continue to stroke arms and force hugs onto the mother’s person, gone in a swish the next moment, the lesser-known reporters, armed with camera crew personnel, stage their versions of perfect shots by climbing on top of one another, laying siege to the family’s bare cooking area, shoving their cameras onto the lone stove that sits unlit in the corner. “We haven’t had a chance to cook or eat anything since morning”, says a close relative of the family to Kavita & Meera, even as one media rep casually adds to the pile of litter of empty packets of chips and juice Tetra Packs that his peers have built through the hours of a single day.

The Special Investigation Team is within the house, while outside, the media rampage continues. Reporters jostle with each other to get the ‘perfect’ shot or byte, snatching from Manisha’s family any chance of some silence within which they can mourn the traumatic loss of their daughter. Manisha’s family insists that they don’t want to answer questions anymore; their mouths are dry, their heads hurt, their throats ache. Besides, they are tired of repeating their heart-rending story over and over again for the camera–cameras that didn’t even acknowledge the existence of their village before “scandal” hit the news circuit. 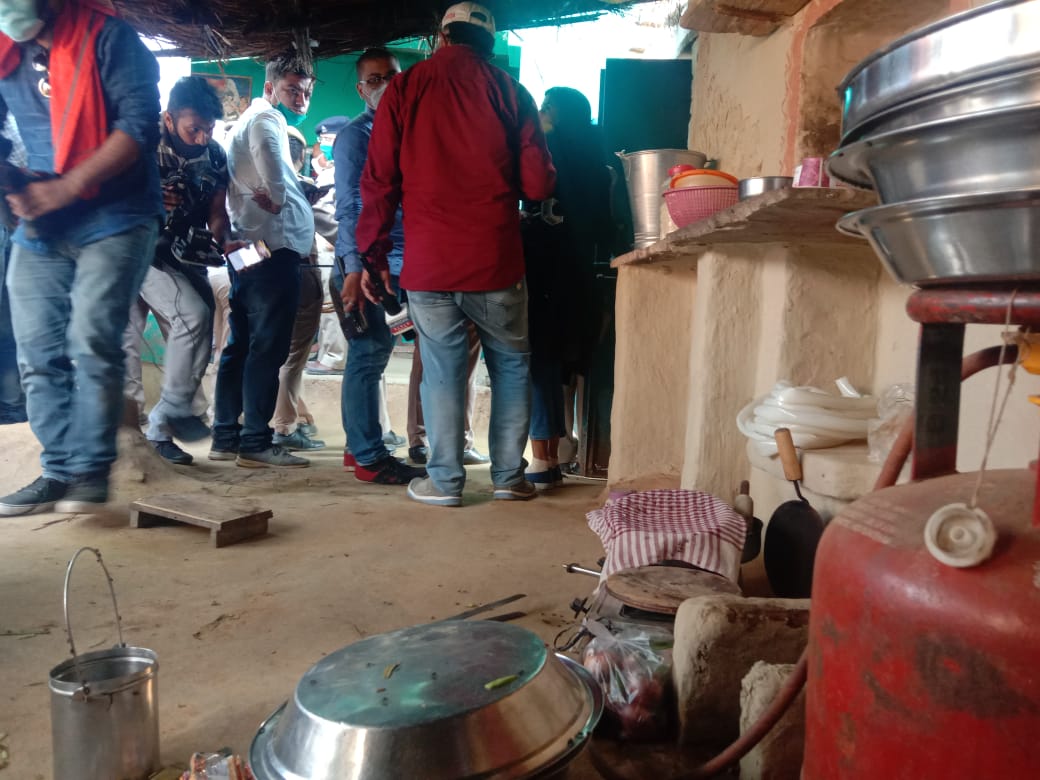 If the Valmikis feel unsettled, displaced, exhausted, the reporters and media personnel accosting them are quite at home. The family’s belongings and property have been put to the service of our noble and considerate fourth pillar of democracy. The family’s furniture and utensils have been strewn around in the yard and even broken; after all, the media must be kept well-fed and well-entertained. Scenes from the Valmiki house show media personnel chatting, laughing, eating, while the badgered family cowers indoors, unable to even cook for themselves when faced with the onslaught of cameras and reporters. It seems that we have abandoned not just journalistic ethics, but ethics altogether.

The police treatment of the family has been no less horrific. The police force had engulfed the village, initiated a complete lockdown and decalred a containment zone till 2nd October, with police checkpoints extending for about two kilometers out of the village. Surveillance seems to be the name of the game; there are checks on who can get in, and get out. However, before we could congratulate the police for doing their job, we realized that the police were more fixated on establishing the criminality of the victim’s family, than on apprehending the actual perpetrators of violence. According to the residents of the village, the police behaved as though the family they were supposed to be protecting were criminals themselves, while the SIT recommended a potentially illegal narco-analysis test for the victim’s family. While we are left with a sick feeling at the back of our throats from the entire episode, but with the drive to continue to speak up loud and clear, a relative of Manisha’s says, “I can’t speak anymore…It’s too distressing.”

Khabar Lahariya has been reporting on caste-based atrocities in the north Indian hinterland for the past two decades, and even last week in Hathras, across our districts in Banda, Ayodhya, Banaras in Uttar Pradesh & Panna in Madhya Pradesh, we spoke to many Dalit-Adivasi citizens to who have demanded the government to take the harshest action against and protect their rights. As is obvious from their testimonies here, it directly contradicts the stance many allies of the ruling elite are taking to remove caste from the conversation. And many Twitter users following our live updates seemed to agree (refer to screenshots below), even as TV media and government top brass casts various aspersions on the victim and her family, spinning the narrative (from suicide into murder some days) and murder into “honour killing” on others. According to Kavita, “The family is petrified: I could be sure that if there wasn’t a police force there in such large numbers, they’d be at risk of their house and property being burned down by the furious upper-castes who are being allowed a free rein to protest in favour of the accused. But the victim’s family also don’t seem to have any proof on them, and so, the case is entirely in the hands of the state, the police, and the media.” 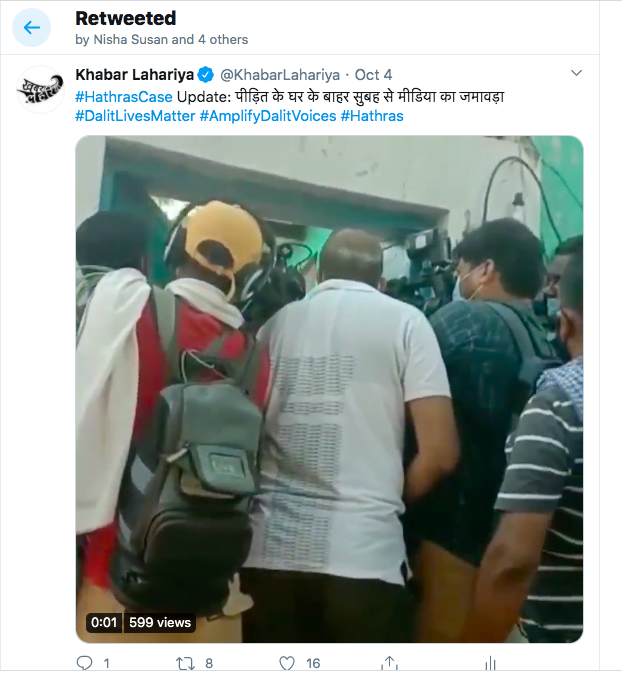 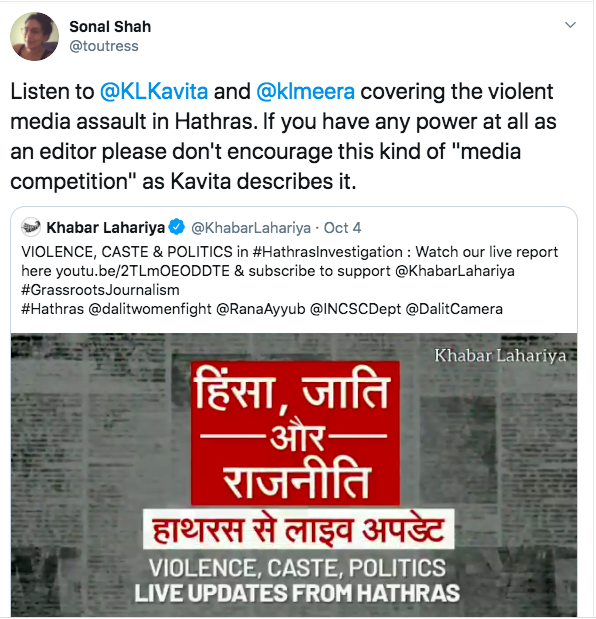 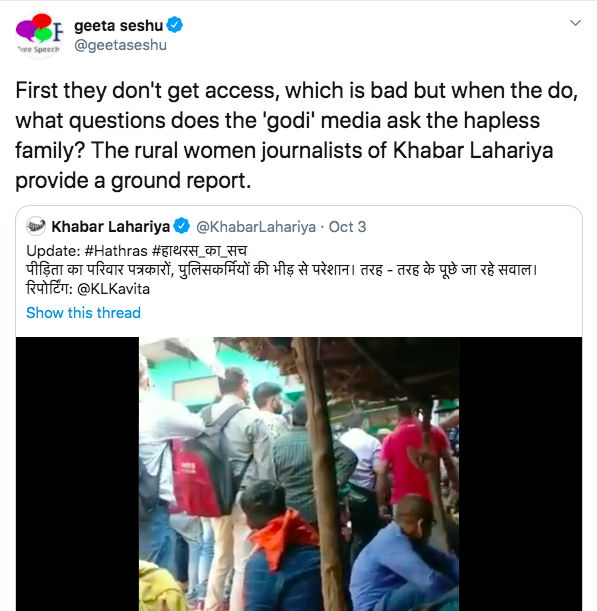 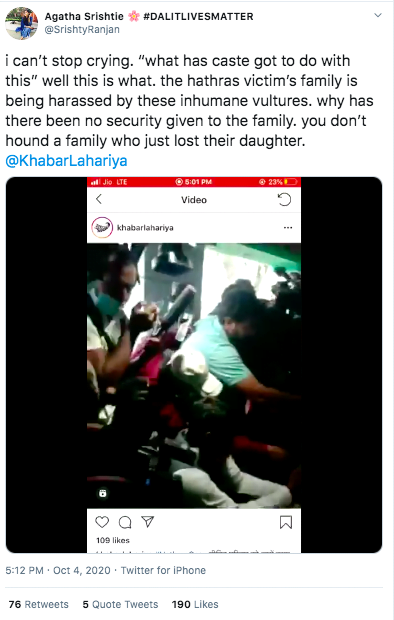 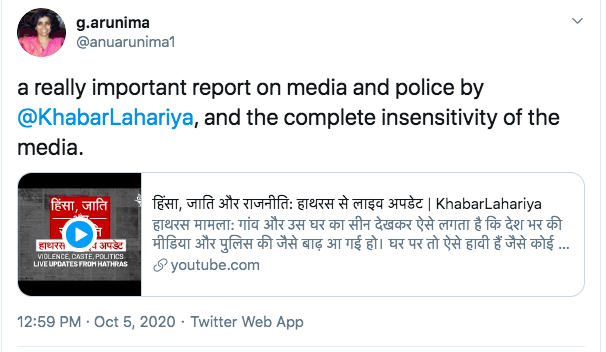 Exclusively Co-published with The News Minute.

Written & Reported by Khabar Lahariya, India’s only grassroots, feminist news, and media platform, run by an all-women team of reporters, editors, and media practitioners, reporting on media-dark geographies of the north Indian hinterland.

All images by Khabar Lahariya.