Dispatch from Bundelkhand: The Dalit Vote

From amidst the bylanes of bastis duly visited every five years, Khabar Lahariya conjures up an atmospheric exit poll from the hinterland

There is a brick waterway, perhaps dating back to the era of the Mughal-Maratha wars of Bundelkhand, in the late 17th century, that flows through the Valmiki colony in the town of Banda. It used to be a place of beauty and leisure, words that aren’t generally associated with present-day Bundelkhand – where the canal is now a sewer, its waters turgid and slate-coloured. Refuse from different corners of Banda empties into it, through the day, unceasingly. The only ones enjoying some quiet time here are a couple of boar-sized pigs.

As we walk around the colony, we hear the deep resonating truth, as expressed by its residents. It’s a master-class in rhetoric: “If Brahmins were living here, would it look like this?” 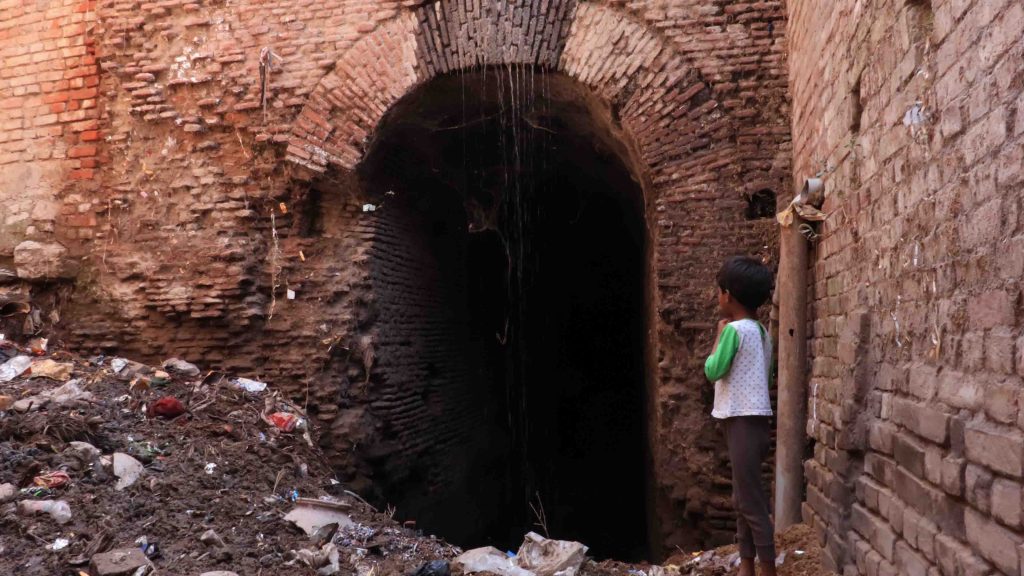 As a charged, shape-shifting election kicks off in the nation and its most populous state of Uttar Pradesh, one question remains momentous: Where does the Dalit vote stand? Is it changing the landscape, feeding the fissures formed by Congress-OBC (Kurmi/Kushwaha) alliances, or Samajwadi Party and Bahujan Samajwadi Party politics? Or is it deepening the saffron hues that have seemed considerably faded over the last 12 months?

In a bid to understand it better, our noses to the ground, we are pulled first into the palpable discontent in the Valmiki colony in Banda. The residents here are enraged. But the anger is not about jobs – that usual suspect in India of 2019. Several of the colony’s residents in fact have got safai karmi (or ‘sweeper’) jobs in the local municipality – they are conspicuously silent. But for the rest, the issue is sanitation in their own neighbourhoods. The population of the colony is around 1500, comprising mostly Domars and Khatiks, sub-castes of Valmikis, historically associated with manual scavenging and the disposal of excrement, and some Muslim households. Uttar Pradesh’s claim to Open Defecation Free status notwithstanding, the streets and sewers in this mohalla haven’t been cleaned since the last general election. We are lucky enough to catch the contractor Himmat at work, a Domar himself who tells us, quite matter-of-factly, that he gets the job every five years. “Modi has another shot at power,” he says, and adds, “Or at least that’s what he thinks. It’s now or never, isn’t it?”

In the five-year interim period, the basti is told that they clean the sewers themselves. Saroj puts it succinctly, “We’re told, you’re jamadaars, so do it yourself, like you do for others.” Says Vinod, “We voted for the BJP in 2014 thinking that there would be a change. We voted for them in 2017 also. This time, we’re not going to.”

U.P.’s Bundelkhand sends 4 of the 80 MPs that make up the lower house of parliament. In the powerful mathematics that caste plays in allocating party tickets and votes in Bundelkhand, the 1.5 million or so Valmikis don’t really count for much. The appeasement, and splintering of votes is fast and furious amongst the substantially more numerically significant Chamars (almost 20 million, and 14% of the population of the state). Here, in the Valmiki colony, there is astute, and angry recognition of this fact – that they do not really matter to any party and hence their vote is of little or no consequence. (The TRPs of sanitation politics notwithstanding). In the colony, Dinesh tells us, “The Chairman of Banda, Mohan Sahu, has claimed that since Dalits don’t vote for his party, he’s not interested in helping us with our sewer problems.” The people are cynical, or perhaps straightforward about their votes, “We don’t care if it’s Modi or Yogi, or SP or BSP. We just want these sewers cleaned.”

In a region that has seen considerable social churn in the years after Kanshi Ram and Mayawati altered the political landscape permanently, and brought Dalit politics from the north to press on the national conscious, there is definitely a sense of fatigue and cynicism amongst the Dalit vote base, along with a steady anger with the BJP. Assembly constituencies which were hard and fast Bahujan Samaj Party supporters until 2014, are dangerously quiet, despite their anger with the promises that the BJP had made them in 2014 and 2017’s assembly polls. Gulab Verma, the recently appointed president of the BSP in Banda, refused us an interview, demanding why he needed to be interviewed in the first place. In the division of seats, the SP-BSP coalition will contest, the Banda seat will be contested by the SP candidate, an ex-BJP trader named Shyamcharan Gupta. Like toilets in rural schools in this ODF state, there is more often a lock on the BSP district office, than not.

There may be a lack of passion around the BSP on the ground, yet there is still a voice that says that, whether or not she contests the election, or whether the might in the SP-BSP coalition tends towards the SP, there still may be a Mayawati (or curiously enough “a Mamta ji”) in power at the Centre soon. It’s a faith that is quiet and strong at once. An 18-year old from the Valmiki Colony in Banda, belongs to one of the much-profiled vote banks this year, the first-time voter. He is clear that his vote is for Mayawati. In his imagination, we reckon is a leader who gets the things that need to be done, done.

That isn’t unlike the voices we hear at the nomination ceremony in Banda, where Gupta is holding fort. Unshaken in his faith in the alliance, despite being an ex-BJP M.P. himself, he says, “It is an immediate response to an emergency situation. It was an accident joining the BJP, you can say. An unfortunate event. Lekin ab ghar wapas aa gaya hoon. (But now I’m back home).” Another first-time, unemployed voter at the rally rails against Yogi Adityanath’s comment about the lack of eligible candidates for jobs in U.P. Even as women line up to watch the drama unfold, refusing to reveal their thoughts, keener to hear who would actually speak for their interests, young Dalit voters express cynicism about the charismatic and ambitious Chandrashekar Azad. They are unclear of how his post-election politics would turn they say, and hence are likely to reserve their faith in the resistance to the BJP, the “gathbandhan”.

In the build up to the nominations, the fatigue with the existing options has manifested in productive outcomes too. Young Dalit leaders, their on-ground reach bolstered by the possibilities of social media have found ways to raise issues of identity, rights and marginalisation of various Dalit sub-castes (including the Chamars and Koris). They often critique the BSP’s political compromises – appeasing general castes by offering important seats to other castes, or allegedly charging potential candidates exorbitant sums of money for party tickets, and thus eliminating strong Dalit candidates, all the while aligning themselves with the BSP and Ambedkarite ideology. These leaders are visible either as ‘social workers’, or affiliated with Dalit youth formations such as the popular Bhim Army.

Long-time BSP supporters, like Madhav Prasad, a 60-year old farmer in Banda, comment on the wreckage of small holdings by stray cattle and the highly inflated rates of migration, over the BJP’s growth-focussed stint in power. “We’ve sent our families out to work, and only call them back when there’s a crisis at home, like someone is very ill. Now we’ll call them because we need their vote in this election. The migrants all need to come back, all of those who’ve gone to Surat and Mumbai and Delhi, we will make sure they come back and vote against the BJP”, he says. One of Prasad’s biggest critiques of the existing government is that their caste politics have been crippling for the poorest, “Khana band karwakar latrine karwaya hai (It’s like denying the poor food and offering them toilets instead). What is the meaning of that?”

What leaves no room for doubt is that there is no Modi wave this time around. The Dalit voters are very clear on BJP being anti-minorities – the reservations in the general category being an example they like to cite. In one voice, they say they’re definitely not voting for Modi. “Kamal ka phool, sirf ek bhool,” is the local rendition of that sentiment. The gathbandhan is what seems to hold most hope for the community, if only as a resistance to what the BJP stands for. “Remember the date, May 6”, says Prasad into the camera, alluding to the polling date in Banda, even as young supporters at the Gupta rally smile and say, “100% gathbandhan”.

But, as past experience has shown, the game is still very much on. As our local transport guy Rajan put it, “It takes just a few hours for the political mood to shift in Bundelkhand.” Well, we’re watching closely.