Login
खबर लहरिया Bundelkhand & Beyond No food, no water, no money

Maneuvering the lockdown, contradictory government mandates and the always looming threat of both the virus and starvation, the first wave of migrants finally returned to their hometowns this week.

Homecoming has never looked so bittersweet.

In the current spirit of being ‘vocal about local’ we waited at Banda station to welcome the first train of labourers returning home from Surat on the newly-running Shramik Express trains.

After the Central government allowed for the movement of migrant labourers back to their home states, the Indian Railways began operating ‘special’ trains to service these workers given that the nationwide lockdown has been further extended to 18 May, with the possibility of yet another extension.

The people we greeted were on the Shramik Express train from Surat to Uttar Pradesh. The train carried 1,220 workers who will be screened for the virus and then taken to their respective hometowns on roadways buses.

Anita, a young wife, travelled with her two children from Surat, back home to Banda. Her sense of relief palpable, “We had a business in Surat. That also stopped and we started having trouble getting food. I was also missing home. I’d left my parents behind, my in-laws, my family. I am happy to go home. It’s a good feeling.” 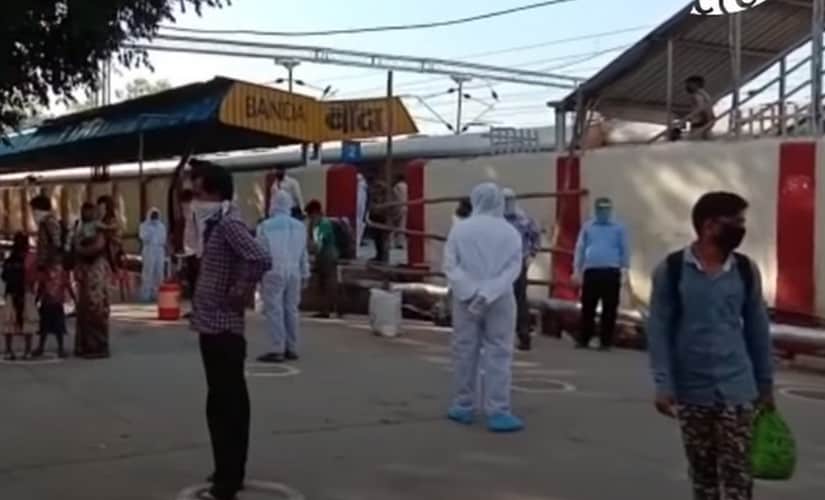 We waited at Banda station to welcome the first train of labourers returning home from Surat on the newly-running Shramik Express.

Jeevan, another labourer from Surat said, “There was no food [in Surat]. The food markets would open for just an hour and we would go and get our supplies.” When asked if any government rations or subsidies were offered, he said, “We paid for everything. I spent whatever I had. I had to come home. The landlord was making my life difficult. He said, “If you don’t pay up, you can’t stay here.”

This seems to fly in the face of the orders issued by various state governments to prevent evictions and rent collection for at least a month during the lockdown. Jeevan said, “No one’s following that order.”

Shyambabu concurred. He too couldn’t pay his rent and so was forced to leave the city. “We weren’t getting food or anything and the room owners kept telling us “go, go!” I usually pay Rs 1,800 [rent]. If you don’t have money, how can you pay? Of course there are problems. I didn’t get my wages, we couldn’t get our rations, we couldn’t get food or water.”

The lockdown has debilitated the lives of millions of migrant labourers in our cities who live paycheck to paycheck in an attempt to provide for themselves and their families back home. Shyambabu continued, “When we couldn’t get anything, we were scared. About whether we were going to get home or not, or how, especially since the lockdown was on.”

Shyambabu’s fears are well founded. After a series of missteps by the Central and state governments, provisions were finally made to facilitate travel for migrant workers. Previously, both the Central and state governments had clamped down on the movement of labourers, resulting in several brutal, but highly preventable accidents, such as the migrant unrest and lathicharge in Mumbai.

Further, the dehumanisation of migrants continued through sub-par relief camps and quarantine facilities and arbitrary police violence: In one horrific case, migrants travelling back home on foot were even sprayed with disinfectant. More recently, 16 workers leaving Ahmedabad for Madhya Pradesh were killed after a train ran over them while they took a break from their arduous, 600-kilometer walk to their hometowns.

There seems to be a clear trend emerging: migrant labourers are increasingly being seen as expendable when they are not producing. The Karnataka government drew criticism last week after cancelling the state’s Shramik Special trains, stating that migrant workers would not be allowed to leave since construction work in the state was beginning again.

That decision has since been reversed.

However, coupled with the relaxation of labour laws in Uttar Pradesh, Rajasthan, and Gujarat in order to attract foreign investment, there is a growing tendency to see migrant workers as a resource instead of as human beings with very real needs. It is no wonder that the people we spoke to were astounded and grateful that they were able to return home relatively unscathed.

While some labourers were happy with their train ride back, others were not so lucky. A special train from Vadodara to Gorakhpur that stopped at Banda saw the death of an old woman for health reasons unrelated to the coronavirus. Authorities on the train allegedly ignored symptoms of her illness.

Our current conversations, however, pointed to different problems. Roshni and her sister, visiting family in Surat, said, “Paani nahi mila, khaana nahi mila, toh dikkat toh hogi na” (we weren’t given food or water, so of course, we’d have problems).

But while there may be no food or water, at least the stations were sanitised. We spoke to the man who has been in charge of disinfecting the station for over a month now. His torn gloves bear testament to the grim state of affairs. When asked whether he was afraid of exposing himself to the virus, he said, “Yes, I am scared. Jaan hai toh jahaan hai.” Yet, it seems that fear does not exempt him from carrying on.

The railways is charging the labourers anywhere between Rs 600 to Rs 710 for their ticket. The fare includes the price of regular sleeper class tickets plus superfast charges of Rs 30 and an additional charge of Rs 20.

One can see the irony and the apathy behind asking the poor to pay for their own tickets home while the government is simultaneously launching its largest repatriation effort in history to bring back Indians stranded abroad. The railway ministry is also supposed to provide one meal for trains longer than 12 hours, while state governments have been made responsible for providing food packets and water to the passengers at the stations of origin.

The railways ministry has said that state governments can pay the ticket fare on passengers’ behalf. However, many states have refused to foot the bill for their most vulnerable. The miscommunication and constant back and forth between the Centre and state governments has played out through the real trauma and hardships of their citizens.

Caught in the interstices, these labourers are deprived of safety nets and of their rights. Prime Minister Narendra Modi’s most recent, 30-minute speech did not spare a single moment to address or acknowledge the plight of India’s labourers.

In the face of the State’s gross negligence and failure, these labourers were forced to take his ‘aatmanirbharta’ to its logical conclusion and help themselves. While some survived, many didn’t. Self-reliance means nothing without institutional support.