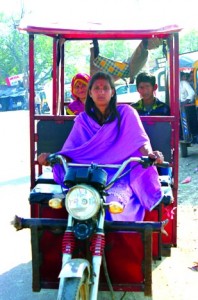 Mahoba. If you ever visited a small town, you’d know how public transport – loud and authoritative – is an enterprise that more or less runs the lives of residents. The first bus to the nearest kasbah and the last bus out to one’s village, when and if they arrive, set the tone for the day. It’s no wonder then, that bus drivers and tempo drivers rule the streets: if they want to pack in twice as many people as they have seats for, they will; if they want to keep 15 passengers waiting to fill a space that doesn’t exist, but can earn them 10 extra rupees, you have no option but to wait; and if they feel like they want a paan-break, you can only indulge them, and perhaps many of your fellow passengers too. This is the picture into which we insert Ramdevi, who turns heads as she drives past tempos bursting at the seam, skinny cows, dhabas and vegetable markets in Charkhari in Mahoba.

We were sitting at one of these dhabas in Charkhari on a warm spring afternoon, when our heads turned too. An e-rickshaw whirred past us with a young girl behind the wheel. We saw a story and followed her until we could persuade her into conversation. Ramdevi was on her way to buy vegetables and then she would drive home to Babnetha, a small village about 5 kilometres away from the main kasba in Charkhari. As we wait for Ramdevi to complete her chores, an inquisitive vegetable seller asks us, ‘You’re here to talk to the girl who drives that gaadi? She seems sweet but it must be difficult work.’

Serious at first, 17-year old Ramdevi broke into a smile soon into our interview. ‘You want to talk to me about my driving? I can see everyone looking at me when I come here to the town area, you’re the first to say something!’ she says.

‘I was in school in Delhi till a year ago – where my father bought this rickshaw. Then we returned to our village here in Mahoba and the rickshaw was just parked at our house. That’s when I got the idea that I should learn to drive it. Why not make life easier?’ A young boy is waiting for Ramdevi in the rickshaw. ‘That is my brother. I drive him to school everyday and then pick him up. In the meantime, I am also pursuing my Bachelors from Charkhari. Sometimes I drive around other kids from the school too. Sometimes when there are other people from the village who want a ride to the kasba, I ask them to hop on. My parents haven’t objected to this.’

Even as Ramdevi starts the rickshaw to head home, she gets curious looks from tempo drivers parked at the crossing. ‘They’re becoming used to seeing me gradually, I think. I don’t get affected by them looking at me. This is just such a convenience, so I don’t bother what people looking at me are thinking.’

Mahoba is one of the thirteen districts that make Bundelkhand, an area spread over south east Uttar Pradesh and north Madhya Pradesh. Not only does it (along with other areas in Bundelkhand) have a history of women being confined to homes and the now banned practice of Sati, it is still one of the least developed districts in the country where married women are expected to hide their faces behind a ghoonghat when outdoors. While these norms are slowly being challenged, Ramdevi’s bold and noticeable step stands tall.