Lucknow. ‘Our dress code is red and black – we wear a red kurta and a black salwaar. The red is supposed to warn onlookers because we can be dangerous and the black is a mark of protest and resistance. We are capable of and we will resist you,’ explains Usha Vishwakarma. Usha is a founder of Lucknow-based group Red Brigade. Red Brigade has been working with young women since 2011, teaching them self defence for when they might need it. 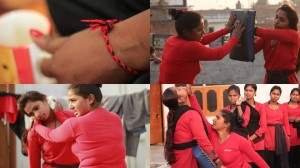 Uttar Pradesh has been termed the ‘worst state’ in India in terms of law and order by the National Crime Records Bureau (NCRB). Women are also most unsafe in UP, according to a report of the NCRB. According to the 2009-10 Annual Report on Violence Against Women in India, put together by the National Commission for Women, Uttar Pradesh has had the highest number of registered cases of violence against women. In 2013-14, incidents of rape and murder in Muzaffarnagar, Shamli, Badaun and in the state capital, Lucknow, have hit international headlines.

With decades of history and a social fabric that has long accommodated this violence, women fighting and resisting this violence have a tall order before them. At Red Brigade, Usha along with her team have trained nearly 17,000 women across the state. After having faced sexual harassment at a young age, Usha says- the main aim of our training was that if we are made to feel threatened in a public place, we will use this training to defend ourselves. We would make sure that we retaliate.’ In 2013, Red Brigade received the Philips Godfrey Award for National Bravery. They have also been running a spirited campaign to provide assistance to acid attack survivors.

Banda/Chitrakoot. Meanwhile in the Bundelkhand, a region where violence against women is the norm, Vanangana, a feminist organization, has been actively providing support to survivors of violence for over 20 years.

‘Some years ago, a woman was burnt alive by her husband in Bhaunri village and nothing was done,’ reminisces Awdhesh, a senior activist with Vanangana. Having had a long association with the organization, Awdhesh has worked extensively with survivors of violence in Chitrakoot and Banda district. ‘I strongly believe that a big reason behind the harassment and violence against women is the low literacy rate among women in these areas. This has led to fewer women in the local administration and politics despite the 33% reservation for women in the Panchayati Raj system.’Awdhesh’s concerns are well-founded. According to the 2011 Census, the change in women’s literacy over the 2001-2011 decade has been a mere 2% (from 50.3% to 52.74%) and in Banda women’s literacy in 2011 stood at 53.67%, much lower than the average literacy rate which was 66.67%.

Awdhesh adds, ‘Women’s literacy can be a powerful tool for women to combat violence but it is also important that more and more women come together and organize themselves to collectively raise their voices against this violence.’