In Banda district’s Palra village in hinterland Uttar Pradesh, the onset of summers have been as cruel as early. The centre of all attention as temperatures start to soar – the village handpump – has had sand clogging it, which has rendered it unusable. The residents of Palra, while part of the larger national statistic – according to the WaterAid report in 2018 that cites how over one-tenth of the Indian population does not have convenient access to clean water – find themselves helpless and miserable in this situation nonetheless.

“It (handpump) is only giving out sand and has become clogged with it. There is no one who has come to repair it. The village head has heard our complaints but no solution came of it,” says Boda. “It has been two months (since the handpump broke down). It is summer time and we have to sit for the water in the morning and have to work in the fields in the evening. There are also episodes of aggression and fights over water every single day,” says a disgruntled Mamta, who as a woman has been severely affected by the ongoing crisis – since the collection of water is seen as a woman’s job, primarily. 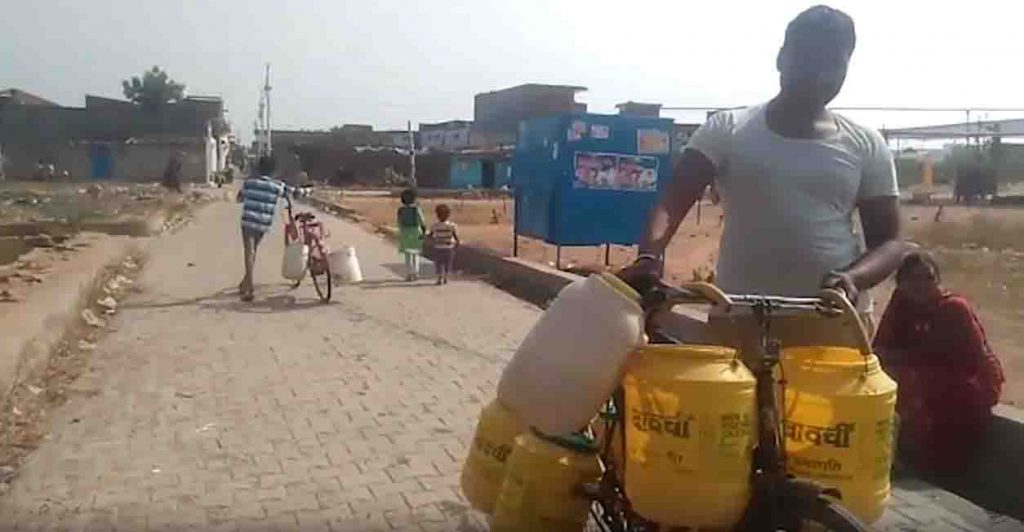 Palra, with a sizaeble Dalit population, has found its requests and complaints around the hand pump issue completely neglected. While one is clogged, the other hand pump remains broken – it’s been over two months. And now with the season turning for the worse, this has forced the residents to trek for miles in the scorching heat to the closest source of water, which happens to be another hand pump in another settlement. This is where they wait for hours on end and at the first opportunity, fill up the empty pots and pans and buckets and mugs they have brought along. They also take quick baths under the hand pump.

But in a culture deeply divided along caste lines, this poses problems of its own. The settlement’s inhabitants display openly hostile attitudes towards the people of Palra and often deny them access altogether. As Suman puts it, “They say we’re not allowed to use the water from here. “We lug the buckets in this heat, travel a long distance and there are crowds here who don’t let us use the water.”

This is a systemic concern. Centuries of caste discrimination forging skewed resource distribution in India, has on the one hand, led to severe under-representation in education, employment and land-owning, and on the other the orthodox, false notions of purity and pollution have been used to deny lower-caste and/or those belonging to Dalit communities, basic amenities and opportunities in the social world. Out of 99 hand pumps in the locality, we found 91 functional. Two of the crucial eight broken/unusable ones happen to be in Palra. Or perhaps it is not a mere coincidence.

As the heat of the election season adds to the boiling rage here, is not with much surprise then that we find the Dalits of Palra leaning towards Mayawati, iconic as she has been for the community. She’s still being viewed as someone who can make things happen for Dalits.

Meanwhile, closer on the ground on the political front is Chandra Pal, the pradhan of Palra who has promised his fellow residents quick action on the hand pumps front. “It will be functional in the coming weeks”, he tells us over a phone call, absent from the village, “The machinery that’s required to clear out the clogged hand pump is taking a little time to arrive.”

But it has already been two months plus, and the people of Palra are in no mood to sweat it out any longer. As we exit, whispers of a vote boycott fill the air. All over a clogged hand pump that has come to represent the clogged caste-based prejudices of a system too.