Login
खबर लहरिया Development Pay for the toilet on your own: what Madumar villagers are being told post the Swachh Bharat promises

Pay for the toilet on your own: what Madumar villagers are being told post the Swachh Bharat promises

Madumar, MP: “There were people building toilets everywhere and we were also told to do the same. We got the cement, stones, material all by ourselves on the assurance of getting the money for it. They can at least give us some of the guaranteed Rs 12,000” says Munni of Madumar village in Tikamgarh block, Tikamgarh district of Madhya Pradesh.

Her family is one of the many who were encouraged by the sarpanch to start the construction of their household toilet as a part of the village’s toilet construction drive. Now, however, he says that some of these households don’t figure in the list of households who have been allotted funds.

In October 2014, the NDA government introduced the national Swachh Bharat Mission (SBM) with the ultimate aim of ending open defecation in India by October 2019, which will correspond with Mohandas Gandhi’s 150th birth anniversary. It differed from previous sanitation campaigns like the Nirmal Bharat Abhiyan, the Total Sanitation Campaign as its subsidy amount (Rs 12,000) for individual toilets was higher than the previously offered Rs 10,000 and Rs 4,500 respectively.

Also, unlike the government’s discourse that the SBM is a people’s movement where communities collectively come together to encourage and initiate latrine construction and end open defecation, there are many reports of villagers having been coerced or pushed into building toilets of their own on the backing of false claims, as has happened in Madumar.

Moreover, many have built toilets by taking loans and are now having to repay interest on this. Bhuribai’s family has spent Rs 15,000 for a proper concrete-built toilet.

She says “If we knew this would happen, they would not have built. We have been requesting the sarpanch for the money since the past two years but he keeps saying that your name is not on the list.” Her family belongs to the Ahirwar communities who fall under the SC category, and are supposed to be automatically deemed eligible as per norms.

Rati from another household says, “The sarpanch had even said we can build two toilets but money had come for only one. We had to spend money for all the material and now have no money.” They too had gotten a good quality toilet made of concrete bricks, metal doors and a roof. It even looks sturdier than their house that is built of mud bricks and has a makeshift door.

When Harischandra Rai, the sarpanch of the village was contacted he was firm in repeating the statement that had been reported by others: “Those whose names are on the list will get the money, not others. There is no scheme now for including those people who are not eligible for funds.” 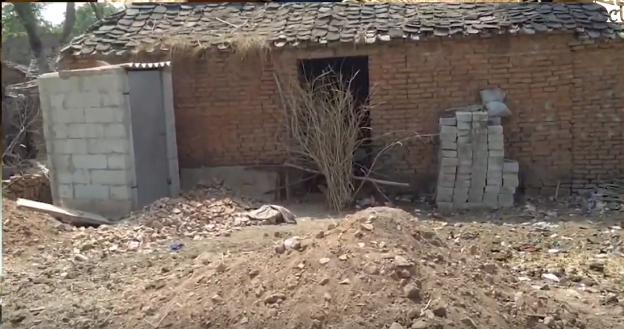 This eligibility cited is based on a baseline survey list, conducted in 2012 to identify eligible households all over the country. Madhya Pradesh, like all other states in the country, is said to be more than 70% Open Defecation Free (ODF) as per official records.

However, in Tikamgarh district, more than half of the listed households do not have toilets yet. In Madumar Gram Panchayat itself, where 533 households have been deemed eligible, only 84 households have been verified as having had toilets constructed. Such a considerable number makes it unlikely that any of the families our reporter spoke to are not on the eligible’s list.

When asked on what he has to say to those who have not received the scheme benefit, the sarpanch responded by saying, “If people have built toilets on encouragement by others, it is a good thing. I am happy that they have household latrines now, and I hope they use it. Maybe in the next phase, they will get the benefits. Even if they apply for the PM Awas Yojana there is scope for receiving money for the toilet construction expenses too.”

His unbridled confidence doesn’t let him acknowledge that applying for another scheme, in order to make up for the lapses in this, might also be an exercise in endless waiting. The wait is still not in vain for people like Bhuribai who say “We are still in the hope of receiving the money we had spent, by taking loans.”

This Khabar Lahariya article first appeared in The Wire