The final results for 542 constituencies have just been declared. Elections to one constituency – Vellore in Tamil Nadu, were postponed. BJP with 303 seats has retained its position as the single largest party. In this document, we analyse the profile of the newly elected Members of Parliament of the 17th Lok Sabha.

BJP has the highest representation 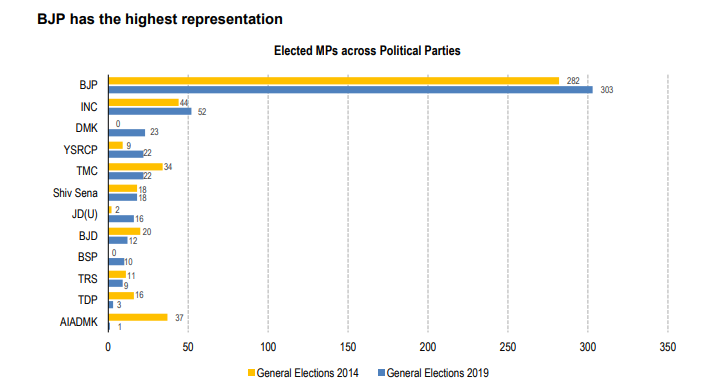 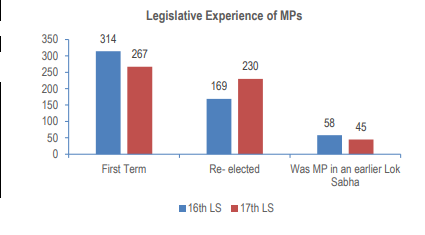 for their first –term. From the
outgoing Lok Sabha, 230 MPs
were re-elected. Further, 45 have
been members of earlier Lok
Sabhas.
 The number of MPs re-elected is
significantly higher than in the last
general election..*

Most MPs have declared political and social work as their occupation

 39% of MPs have listed their
occupation as political and social work.
 38% are engaged in agricultural
activities. 23% MPs are businessmen.
 Only 4% of MPs are lawyers.
 Note: Several MPs have declared more
than one occupation.

Source: The list of MPs is based on information from the Election Commission of India (results.eci.gov.in). The data on the newly elected MPs have been taken from candidate affidavits collated by Association of Democratic Reforms (ADR), Data on other Parliaments is from Inter-Parliamentary Union (http://www.ipu.org/wmne/classif.htm) as on May 24, 2019. Other data is from the publications and website of
Lok Sabha.

This data has been published with permission from PRS Legislative Research (PRS). The opinions expressed herein are entirely those of the author(s). PRS is an independent, not-for-profit group.

The Many Voices of Ayodhya