Our vote is for Behenji 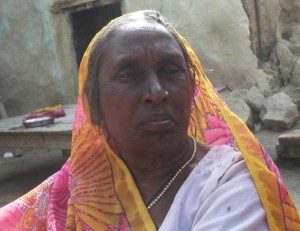 Yadav basti, Sindhora village, Cholapur block, Varanasi. There’s much excitement in the air in Varanasi around the elections. People are talking about Modi, about the Congress. We spoke about this and other issues to Shyamdulari, from this village. She said that she will still vote for Mayawati, for Behenji, for the Bahujan Samaj Party this time. We asked her why.

KL: There’s election fever in the air. Who are you thinking you would like to form the government?

Shyamdulari: We’ve voted for all parties. This time around, we’re going to vote for the Bahujan Samaj Party.

S: We’ve seen the work of other parties. Maybe if the BSP forms the government we will see some development in the village.

KL: What are your views on any other party forming the government?