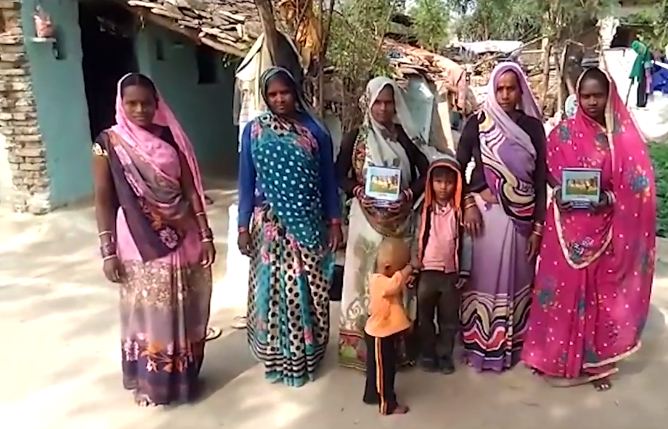 Systemic failures of the country’s largest employment scheme leads to isolated villages in Bundelkhand, such as Kumhedi in Lalitpur

To lend that figure some meaning and gravitas, we must consider the state’s allocation of funds towards the Kumbh mela, a recently-concluded religious affair featuring ritual baths and political shenanigans – upwards of 4200 crores.

In Kumhedi, a foregone village nestled in Lalitpur district in Uttar Pradesh, Vinita, a Kumhedi resident bickers, “We don’t have any options for work here, so we have to migrate.” Kumhedi has seen steady out-migration over the years, with as many as 50 families who have now migrated out, all in search of work.

As per the Economic Survey of India 2016-17, there are over a hundred million migrant workers in India, of which most are circular migrants. The International Organization for Migration found that in 2015, 35 lakh adults in India were amidst migration plans, while 13 lakh were actively prepping for it. Employment remains the central motivation for migration — the 2011 Census data shows that 3 crore of the 14 crore male migrants left their last place of residence in search of work. According to the latest data, there will be 18.9 million jobless people in India in 2019.

The problem is akin to an epidemic in Uttar Pradesh, where 26.9 lakh more people migrated out of the state than migrated into it, the highest in the country. It is a problem that has been growing over time — between 2001 and 2011, more than 58 lakh people in the age group of 20-29 years left the state in search of jobs. “We’ve seen this our entire lives,” said Kumhedi resident Sukhwati, “I’ve spent my entire life seeing people migrate.”

While our consistent reporting on migration shows that the crisis has been building up over decades in Bundelkhand, an emptying Kumhedi is one of a long line of villages that have lost swathes of their populations to migration in a district that is one of the poorest and most under-developed in the region. According to Devendra Pratap Sinha Parmar, the head of the block that Kumhedi falls under in Mahrauni, “The government doesn’t want anyone to migrate.” Which is why there are specific schemes.

The Mahatma Gandhi National Rural Employment Guarantee Act or NREGA, is of course, one that comes to mind foremost. Launched in 2006 by the then-ruling UPA government as a panacea to tackle rural unemployment – at the heart of the migration crisis – NREGA promises employment within 15 days to any adult who applies for employment in rural India, with a guarantee of at least 100 days of unskilled labour employment. The guidelines also state that if employment is not provided through the scheme, an unemployment allowance has to be paid. The scheme rests on the issuing, procurement and processing of the job card – In Kumhedi, we learn that 655 job cards have been issued under NREGA. However, of the 1105 total workers from this village, only 549 are active – an indication, most likely of the populace that has migrated. In 2017-2018, an average of 30.87 days of employment was provided to each household; the state average is 37.35 days. Even among the active workers, only 259 individuals were employed through NREGA in the same year; only three households actually finished 100 days of employment.

The job card too can only take you so far. In a district that is far away from agendas drafted at investors summits organized by the state’s Chief Minister in Lucknow, the more pressing concern becomes the lack of work. As Sushma, Khabar Lahariya reporter from Lalitpur district, had emphasized succintly, “What highways are there to construct?”

Vinita and her family are illustrative of this. They had their job cards made in 2011, but the lack of employment opportunities in Kumhedi pushed them all to Delhi, where they’ve now been living for three years. They now work as wage labourers and come back to Kumhedi occasionally. “The money we need for survival, for our kharcha, that we need, right?” she retorted, “There is no work here.”

Anita, another villager, outlined her expenses for her three sons in school: “The annual expense isn’t less than Rs. 20,000–for school, books, clothes, everything. We spend Rs. 20,000-25,000 every year.” But the minimum wage rate in UP is only Rs. 175 per day, and with the average of a month’s employment every year, that is only a total income of Rs. 5250.

The administrative leaders had a variety of responses to migration in Kumhedi. According to Mukesh Richariya, the village head, the villagers, in fact, do get employed through NREGA but misuse the scheme’s benefits; they demand their wages be paid in advance and then don’t show up for work. But Parmar claimed ignorance entirely, “Until someone comes to me with an application, I will not know if someone is working or seeking employment or has already migrated. I don’t have that information.” According to him, each worker should give his motivation to work in writing because, he said, “Only then will I be able to investigate and then surely we will give him work. He will be hired as labour, he will get work.”

And while the assurance finds echoes in the new norms around minimum wage proposed by a committee set up to construct national minimum wage, the fact that the NREGA state budget for this year is less than the Kumbh budget, is not the kind of news the residents of Kumhedi would find reason to cheer.

For now, until the future they can envision, migration is the only option.