From the Bylanes of Banda to the Cricket Stadium 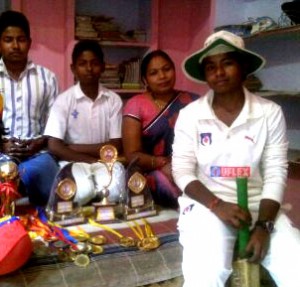 Banda. As we enter a narrow lane in Khaaipaar mohalla in Banda town, in search for the district’s sole female cricketer, now training to play for Uttar Pradesh, the afternoon is quiet, the only perceptible sounds coming from a group of boys chasing one another and playing ball. Neighbours point a few hundred metres down the lane to Shobha Singh Khangar’s house.

It was no easy task looking for professional women sportspersons from Banda. Shobha’s was the only name that came up. The first time we met Shobha, we were struck by her professionalism at such a young age. Shobha could be any other 15-year old at the Saraswati Balika Mandir Intercollege in Banda, but she’s not quite that.

‘I started playing cricket at the age of 6 – in this very lane with my brothers and sisters. After some time my sisters stopped playing with us. I enjoyed sports so I decided see how I fared playing at school. There I achieved some success, and that’s where my journey into professional cricket started,’ says Shobha. ‘Once I was doing well at sports in school, I manages to get permission from my father to play at the stadium in Banda. There I would often dabble in other sports like kho-kho, javelin, and discus throw. I’ve even won district-level competitions playing these. But cricket is my main sport.’

‘There are very few women in this field. Had it not been for support from my parents and encouragement from the school Principal and teacher, I wouldn’t have reached this far. I was lucky that at the time I started training, there was an encouraging cricket coach at the stadium.’

Shobha, who has already earned a name for herself playing against districts like Allahabad and Kannauj, now has her next goal set. ‘The opportunity I have is valuable but now I want to play bigger and am training to qualify for the Under 19 Women’s Team of India.’

Shobha’s brother and sister beam when asked to pose for a photograph with Shobha and her awards and trophies. Outside the house, it’s gone quieter in the lane. As we leave, it seems that the game the boys were playing has come to an end.