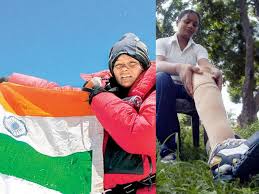 Lucknow. ‘On this Women’s Day I want to tell all women to always aim for success. Tragedy lies not in the fact that we can’t do anything but in the fact that we don’t aim for anything.’ Arunima Sinha’s message is based on a daunting aim she set for herself – ​to scale Mount Everest. On 21 May 2013, at exactly 55 minutes past 10 in the morning, she became ​the first woman amputee to have scaled Mount Everest.

​Arunima readily agreed to meet us when we contacted her over the phone. The day we met her she was just finishing packing up for a trip to Bangalore. ‘It was a combination of my my passion and stubbornness that I succeeded in becoming a national-level sportsperson early on in life. I played volleyball and football at the national level when I was younger,’ says ​26-year old ​Arunima about her life before the accident and before Everest. Currently living in Lucknow with her siblings, Arunima originally comes from Ambedkar Nagar district in Uttar Pradesh.
Dressed casually in loose trousers and a t-shirt, Arunima looks like any other young girl. It is difficult not to notice how comfortable she is walking around on her prosthetic.

​Arunima’s journey has been a long and difficult one. ‘The train accident happened in 2011. I was travelling to Delhi. The train had just crossed Bareilly. There was a bunch of men who had boarded the train with the aim to steal whatever they could. When I resisted their attempts, they pushed me off the moving train. I lost my left ​leg in the accident. Despite the tragedy, people were saying all kinds of things – some said that I was travelling without ticket and others even said that I had jumped off the train myself because I wanted to commit suicide. My family was a pillar of support and stood by me through the ordeal. This experience made me resolve that I had to accomplish something big. By the time I was ready to leave hospital, I had my goal set – I wanted to climb Mount Everest.”I trained for several months at a camp in Uttarkashi in Uttarakhand. Initially, everyone around me thought I was attempting the impossible. People tried to dissuade me but my family supported my decision.’ Arunima’s face finally gives way to a smile as she talks about the day she arrived home after scaling Everest. ‘That day, there were people lining the roads from the airport to my house, welcoming me. I was very moved when my I met my mother and she told me that no matter what heights I scaled, I should always have my feet firmly planted on the ground.’

One may think that Arunima has it all but her hunger for more and ambition are far from satisfied. ‘My aim is to scale the highest peaks of all 7 continents. I have already climbed 3 of these. Eventually, I will open an international sports centre where children from less privileged backgrounds and disabled children who want to get into sports, can be trained. I am already in the process of setting up this centre. It will be located a few kilometers from Lucknow in the neighbouring Unnao district,’ says Arunima.
​Her determination and strong commitment will surely enable her to achieve this aim as well.

From the Bylanes of Banda to the Cricket Stadium

The Price of Rejection