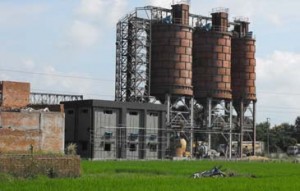 Tanda block, Ambedkarnagar district. Inhabitants of nine villages here are engaged in a battle over the compensation being offered for the acquisition of 265 acres of their land by the NPTC, a public sector company.The farmers hold that previously, when the NTPC had acquired land in the area, they had provided a monetary compensation in addition to a job for one person from the household. However, at present, neither is the compensation for land adequate, nor are jobs being offered.Say Satiram and Neeraj of Salahpur Rajour village, ‘In 1978 when the NTPC had acquired land, one person from each family was provided a job, and compensation for the land was also paid. This time no jobs are being offered, despite the farmers’ stand that it is necessary to have a means of earning income or a livelihood once their land is gone.’The farmers said that once the rate of compensation had been announced, the NTPC hadn’t even waited for their agreement before having the paddy and sugarcane crops destroyed. Madhubir Verma and Manoj Shrivastav told us that 1456 acres of land have been acquired by the NTPC. The land is at present being acquired at the rate of 14 lakhs a bigha, although the farmers’ claim that the market rate is 25 lakhs a biswa (20 biswas make up a bigha). The crops destroyed have been valued at 21,707 rupees per bigha.A source at NTPC, who did not want to be named, said that in 1978, when the company acquired land, then people were given jobs according to their qualifications. This time, the company is hiring only those with technical skills.The District Magistrate, Vivek, said that 2,44,00,000 rupees have been received for the farmers’ compensation, and notices for its disbursal will be sent soon. The ADM Rammurti Misra said that there is only 15 acres of land for which the farmers’ acquiescence is still required.

In Conversation with Chitrakoot’s Biggest Villain