In Conversation with Chitrakoot’s Biggest Villain 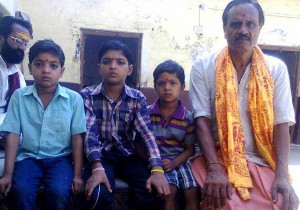 Chitrakoot. The Ramlila has been performed here since a historic 153 years. We spoke to the star artiste of this show, Bajrang Singh.
Bajrang actually wanted to go to Bombay and become a villain in Bollywood. This never materialised, due to circumstances at home. Still, he tells us, ‘In 1984 I auditioned for the role of a villain in a film called “Sumudra ka Beta”. I was selected for the role. But they told me that I would have to live in Bombay at my own expense at first. So I left behind my dreams of starring in the films, and returned.’ But there was an artist inside him, which was restless to be released.
From 1985, Bajrang has played the roles of Ravan, Ahiravan, Kumbhkaran, Hanuman and Sugreev in the Ramlila in Chitrakoot. He says, ‘My dream of being a villain came true – if not in the films, in the Ramlila at least!’
Click here to read original story
0
FacebookTwitterLinkedinWhatsappEmail
पिछला लेख