Self-styled vigilantes are very cool, but only in the pages of an Allan Moore comic. Their 3-D, flesh and blood versions are anything but – they are ugly,and not just ugly but sinister– at least in UP, where they have been unleashed onto the general public in the manner of a pestilence. Armed as they are with the power of a more-powerful-than-ever government, with the blessings (perhaps even literally) of a newly-elected, uber-mighty Chief Minister, they are roaming the galis and lanes and broken roads of our nation’s heartland. We’re terming them self-styled because as policemen, they already wield a certain degree of power and now with an added mandate that is unclear at best, they’re left to their own devices. Making up the rules as they go along, they are walking about, feeling smug, important, flaunting that shiny new metaphorical badge. It reads ‘Anti Romeo Squad’.

It holds pride of place in the BJP manifesto, and party supremo Amit Shah had announced it himself, in a bid to give the BJP an edge in the election race in a state where violence against women has been a raging issue, sensationalised (but rarely dealt with head on) in both local and national media.The Anti Romeo Squad, we were all told, was conceptualized as a special team of officers whose sole duty it would be to patrol the spaces outside colleges, so that girls could “study without fear”. He spoke of the evils of “the roving eye” and predictably, peddled phrases centering on the “chastity and honour” of aforementioned girls. Now, for the sake of argument, if we were to set aside the rhetoric, ignore it as political arsenal, we could perhaps muster some appreciation for the intended effect. We did after all, hear out Ekta Singh, students’ union leader at Saket College, Faizabad, as she told us about all the harassment girls have faced and continue to face in the space of one day. We’re still reeling in shock at the matter-of-fact manner in which she coveyed to us the difficulties girls confront while drinking water at the cooler, how they maneouvre their bodies to avoid having their backs accidentally being rubbed against, or pinched.

But the issue is way, way more terrifying in how it unfolds in real time – this we know, having reported on it relentlessly. A woman hiding out at her parents’ place after her husband tried to burn her because “she refuses to behave like a wife”; a less fortunate woman who died from her burns, whose children spoke of their father’s rage at her; a victim of domestic abuse who’s been boycotted by authorities and denied legal help because her man happens to be a cop; a girl of 14 brutally raped and flung into a deep-as-hell stone quarry, whose positive identification was a crucial problem; another girl, a baby at barely six, someone found at their doorstep one morning, mangled and covered in blood. From across Bundelkhand, from Jhansi, Mahoba, Chitrakoot, Faizabad, Banda, these stories come to us and further an endless cycle of violence and power, one mired in patriarchy.

So what, we ask, can an Anti-Romeo Squad, hope to achieve in a scenario like this? The name itself seems a joke, inviting a few winks, nudges, a few good laughs along the lines of those hajaar What’s App chutkule that’ve been circulating (our favourite one here). Shakespeare might have died a million times since he actually did, but never did it feel as ridiculous as it does now with hordes of men in khaki looking for Romeos and potential Romeos. A ridiculous replay of ‘Wherefore art thou’ a bit too literally, like a bad spoof. 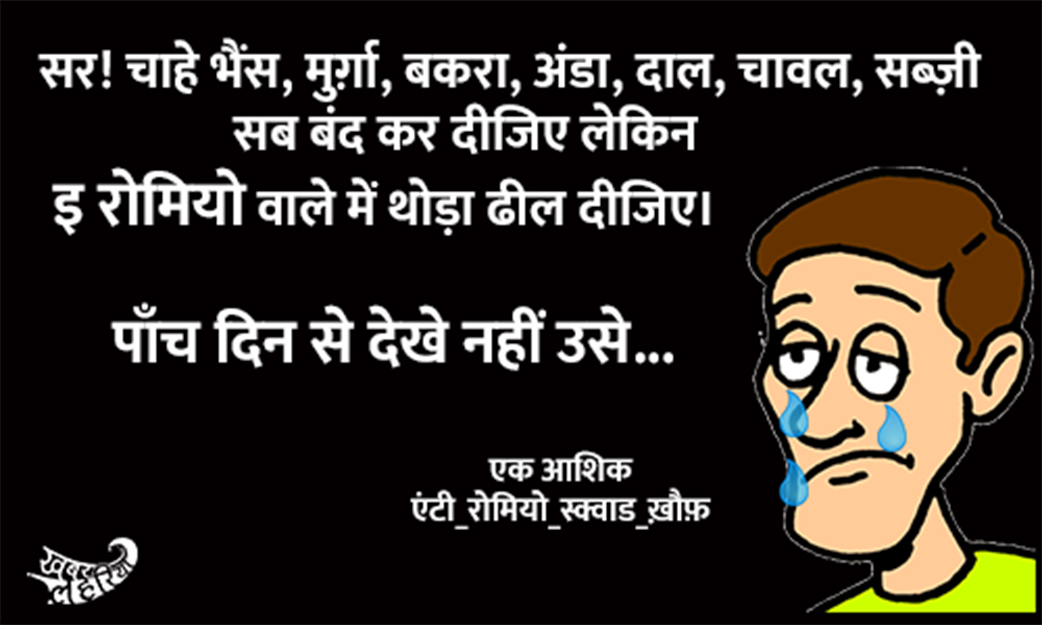 Where does it lead us, where does it leave us? To some roughing up of a few lusty, desperate fellows, perhaps. Cop after cop assigned onto this brigade with the grand notions of being a “squad member” loosely described his job description as an exercise in interrogation and intimidation. Listing out tasks such asinterrogation and “general checking” of a boy hanging out alone orgroups of boys hanging out together “especially near and around colleges and other places”. Also,to create fear among potential harassers.The Chief Invigilation Officer at Banda manning the Anti Romeo squad,Rakesh Kumar Mishra, told us the vigilance is tightened around areas “where young girls and women frequent and/or are likely to be found”. Even as that urged a million more questions in our heads, he added that they’re also most active during the “time(s) of the day” when women are most out and about, apparently. How do they spot a potential troublemaker, harasser, we ask? The identity of the “Romeo” is ascertained we’re told because it’s obvious – he allegedly wears it on his sleeve, wishing to be singled out, conveniently, so us good citizens can sift the chaff from the grain. “Asamajik ladke”, he called them. And besides, the police have undergone a training programme especially to be members of this squad – the details of which Mishra is vague about. Plus, there’s the ‘experience’ to boot: all that experience that cops in the hinterland have in summarily dismissing violence cases that come to their notice.

A good sense that seems to be persuading the vigilantes to zone in on all sorts of Romeos: A Romeo in Lucknow who turned out to be a shy husband waiting outside a lingerie shop for his wife to finish her bra shopping, a scene right out of the Yorgos Lanthimos dark comedy, the fabulous and much-acclaimed The Lobster. Romeos morphed into unsuspecting couples; too many, many couples, all across UP, in parks, on bikes, sharing an icecream. Juliet too is not off the radar, it would seem.

Promises, they say, are meant to be broken. In the case of the BJP sankalp patra, however, there is an almost over-bearing adherence to keeping them (you want security, we’ll give you security). We also can’t help but go back to the spirit of the law, letter of the law analogy, even as the term ‘lip service’ floats about in our heads. Because what good is a mission whose implementation is based on flawed, problematic principles, of the control over women’s bodies?

When news reports of a few girls hanging out in a Lucknow park being troubled by a visiting cop, nay, squad member – the gender prejudice on loitering is a story for another time – surfaced, the Chief Minister intervened. Weighing in favour of love and the pop vote, he seemed to take a stand on what was increasingly headed for a free-for-all scenario, and made a statement about how consensual couples should not be bothered as part of the new directive.

The on-ground truth, however, continues to startle us. Young men in Banda spoke of their fear over their careers because imagine being labelled a Romeo in the midst of your struggle to make something of your life? They are all now presumably dashing (as fast as that’s possible in Bundelkhand) to get their Aadhaar cards made, because, did we mention, that’s what the cops check as identity proof? Besides being that ultimate marker of purposeful existence, as all Indians now know, maybe the point is being let off alright, because the card says ‘Sudhir’ and not, you know, ‘Romeo’. At least your ass won’t be hauled off to the “daroga”, your parents won’t be called to the thana. Park mein murga toh nahi banna padega. Et cetera. Et cetera.

A far cry from a concrete step towards checking the very real violence and the threat of violence that women face every single day of their lives, this Anti Romeo Squad business.

Like sticking a band aid with one of those Chhota Bheem motifs on on a gaping, oozing, agonizing, festering wound.