Acid Attack in Varanasi Village, No Arrests Yet 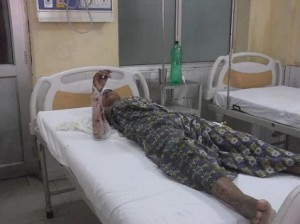 Admitted in the district hospital in Varanasi, Sanno Sonkar was attacked by her own cousin brother who threw acid on her a few days ago. The 18 year old lies in hospital wrapped in bandages with her mother by the bed.

Sanno’s mother Kevala said that Sanno and her cousin would often argue and it was one such argument that turned ugly. She said that the cousins often disagreed but since this was within the family, she never thought there was a need to lodge complaints or take the matter seriously.

She named Mantu, Akhilesh and Pappu as the culprits. All three are on the run while Kevala is alone with her daughter and plans to lodge a complaint. She is most concerned about her daughter’s recovery.

A Futile Search for Water

One After Another, Problems are Aplenty Here