A Futile Search for Water 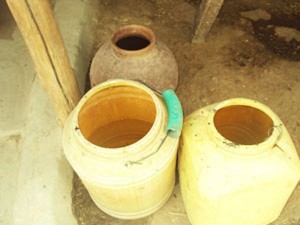 In the district’s Prasiddhpur village in Pahadi block, the Dalit colony has one handpump which has been out of service for the last 2 years. About 20 families, have to go to a neighbouring area for their supply of drinking water. Usha and Mamta, both residents of the Dalit colony said that the village head Suresh has been informed of the problem but has taken no steps. When he was asked, he said that the issue would be taken care of shortly.

In Semariya Charandasi village of Karvi block, the centrally located handpump has been out of order for close to 3 months now. This handpump caters to almost 100 families who now have to walk to another handpump and stand in line for hours. Residents Rani and Ashok expressed their concern over the matter and said that often children run across the road to get water and there is always the danger of accidents happening. They also blamed the village head Devraj Kautaarya for not attending to the matter. On his part, Devraj Kautaarya said that the handpump has been fixed a number of times but it stops working every now and then. He said that he has asked authorities to look into the matter.

In Mau block’s Gahur village, the local well has gotten infected and since 2 months, insects have been found in the water. The village head Mauji Lal claimed that no one uses the well but locals in the Azad Purva of the village said that if the well would be cleaned they would go back to using it. Currently, they are forced to get water from the Balwadi centre in the village.

Acid Attack in Varanasi Village, No Arrests Yet