What Happens After The Woman Candidate Wins?

Is it enough for women to hold positions of power in local government bodies? Can women influence life in their communities from these positions? Or are they simply empty representatives, puppets whose thunder is stolen by domineering male family members? We wrote about women developing a new language of politics in Uttar Pradesh, women who go campaigning, independent candidates who know what it means to win and lead.

We wanted to find more women in rural U.P. politics – women who had won and were leading their districts. After the furore of Zila Panchayat elections died down, we investigated the stories of two women ZP members in Banda and Faizabad. Here, we found a story different from Javitri Devi’s and Anshu Shivhare’s – we found a story that’s the same old story, a story that shows much work remains to be done.

We are at Jawahar Lal Inter College, in Mahua block, Banda, which is the local Voting Centre. Votes are counted here after voting is over. 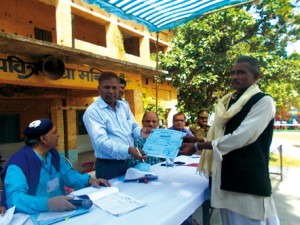 A woman candidate named Munni Devi won the ZP Member elections from Ward 65 in Mahua, but she hasn’t been seen since campaign days. She hasn’t even picked up the certification that officially declares her an elected official. Instead, it’s her husband Gorelal who comes to pick up these papers, and he gets his picture taken with the election officials, who smile for the camera as they hand him the certificate. These vote-counting officials are not interested in pointing out that it’s his wife who has won, not him – they pose very happily for the picture. There’s nothing unusual about this to them.

Gorelal is the one who has been garlanded and congratulated on “winning” the seat. When we try to talk to Munni Devi, she is unavailable; Gorelal speaks in her place and says, “What work do women have here? I’m the one who does everything around here.”

250 kilometres away, in Niralanagar, Faizabad, we seek out Geeta Singh, who also won a seat in the Zila Parishad by 77 votes. We ask people standing around in the mohalla for directions to her house; no one knows who she is. We walk about two kilometres, asking for directions again and again, before we find her house. 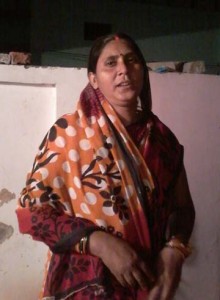 “I only know that I won. I never went outside anywhere to campaign.” Saying this, Geeta Singh goes to find her husband. The team meanwhile turns to her mother-in-law and daughter, and we ask them where Geeta won from. After much pressing, Geeta finally says, “I won this bank colony, Niralanagar and Ghosiyana. These people have voted me into office so I will serve them. But who has asked me to do anything? Who has communicated any of their needs to me?”

Her mother in law angrily shushes her. Geeta once again becomes non-communicative – perhaps in fear of being scolded later – as she waits for her husband to come and handle the media.

Read the original stories, from Banda (Bundeli) and Faizabad (Awadhi).

“If We Could Have Half A Roti At Home, We Would Stay”: Labourers Find No Work in Drought-Stricken U.P., Migrate to Punjab’s Brick Kilns.