Barabanki and Faizabad. The monsoon has barely hit central Uttar Pradesh but villages in Faizabad and Barabanki are already threatened by impending floods and have even started leaving their homes. In the wake of light to moderately heavy precipitation, many families stand to lose their homes and some have already lost their crop. The situation is a regular feature of the monsoon in this area, and so the lack of preparedness on the part of the local administration has come in for serious criticism. 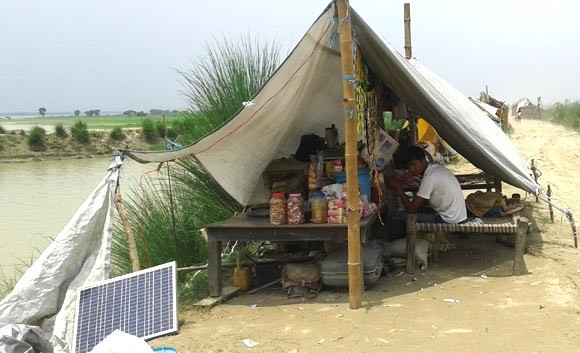 In Barabanki, rising levels of the Ghaghra river forced the local administration to announce immediate evacuation for the residents of Raipur Majha village on 28 June. Almost 300 families left to stay with relatives elsewhere, while others who did not have the option, left for the makeshift site about a kilometre away from their village, close to the embankment. It was only 3 days of rainfall in the area that had led to a situation of hurried evacuation. Kariya, a resident of the village said, ‘It’s the same situation every year. Officials from the local administration are lined up here to oversee the strengthening of the embankment but no one seems to care about those of us who have had to move. Once the monsoon is here, the embankment might also break.’

A month ago, at the end of June, the residents had already voiced concern for the crops they had to leave unattended as the waters rose and they hurriedly left their homes. A month later they are still staying near the embankment in the certainty of losing their crops. With fresh rainfall threatening the existing one, a new 1.2 kilometre embankment is coming up about 30 metres away, sweeping away 25 houses and some agricultural land. The construction is being carried out by the Irrigation Department of the district. Officials from the Department refused to comment on the matter.

‘We are going to have to spend the rest of the season on this stretch with our families. Our kids can’t go to school. There are no facilities here. There is one handpump some distance away which is the only source of water for all the families staying here,’ said Chhedanlal. Mamta Devi is more worried about her children. ‘Once it starts to rain, we stay up all night. The kids are small and we worry about their safety, especially at night. The tents have no electricity, just a lantern,’ she said. Umesh Yadav has already suffered crop loss. Close to the river, his 10 bighas of sugarcane crop has perished. ‘No one has mentioned anything about compensation. I have no idea what’s in store for my family,’ he said. 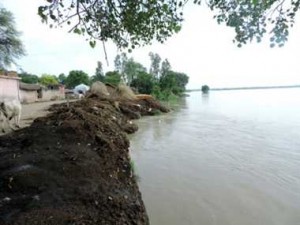 Some distance from Ayodhya, a number of villages in Faizabad also face the looming threat of floods. More than ten families from the Majha Salempur area have already migrated to the Bilwariyaghat Embankment in Ayodhya and more families are on their way. Parasnath, a resident of the area, along with others is staying here with his family and some cattle that they own, in a single tent. ‘Every year, when it starts to rain heavily, we resort to makeshift arrangements. The administration and the government pay no heed to the need for pucca houses near the river,’ he said.

Village head Tej Bahadur Nishad said that he can’t do much to help people like Parasnath. ‘I know that their houses are washed away each year in the monsoon but I cannot make any arrangements for this,’ he said. Sub Divisional Magistrate Amit Singh said, ‘A survey and inspection of all villages that stand to be affected is underway. We have advised the residents of these villages to move to safer locations. Employees in government departments have also been told to ensure that these people get all government benefits.’

Women At Leisure: Photo Essay On Pastime As...

Rizwana Tabassum and the Quest for Human Rights