New P.M. scheme has takers, even if cynical 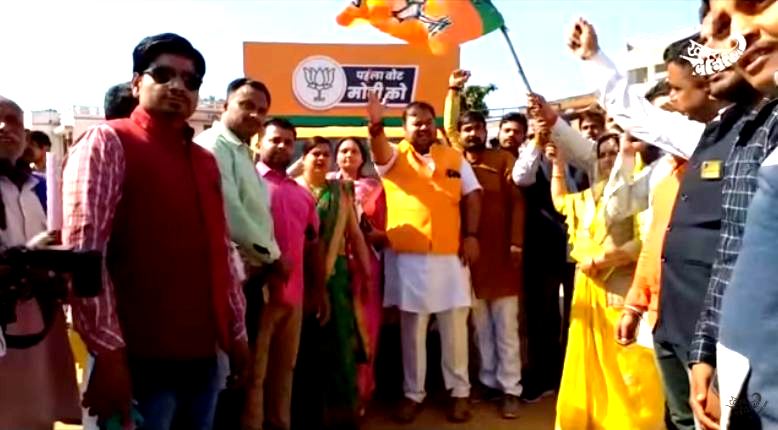 On February 15 this year, Prime Minister Narendra Modi launched a new scheme, the Pradhan Mantra Shram Yogi Mandhan Pension, with a mandate to provide pensions for those who work in the informal sector of the economy. Workers between the ages of 18 and 40 are eligible for this scheme if they earn less than Rs. 15,000 in a month. In order to avail this voluntary and contributory pension scheme, workers will have to deposit Rs. 55-200 rupees into their bank accounts every month. After the beneficiary turns 60, a monthly pension of Rs. 3000 will be transacted into their accounts.

PM Modi’s “gift of a strong future” – as worded in the advert for the scheme – is said to have already enrolled a record number of future pensioners in its ambit, in a mere 25 days. But scepticism around the scheme is simmering in rural Chitrakoot in Uttar Pradesh, the country’s most populous state.

Take Vidola for instance, who lives in Mau and works as a cook in the kitchen of a local school, who expressed her confusion on the finer points of this scheme.  “I get Rs. 1000 every month in my bank account, as my salary. Even that is irregular, sometimes I get it and sometimes I don’t. So I don’t always manage to have money in my account.” She added, “If there is no money in my account, what will they cut?” Vidola’s question is one among many that linger on in the aftermath of the Pradhan Mantra Shram Yogi Mandhan Pension scheme’s announcement, since the finer details of the PM-SYM are yet to be disclosed.

Triveni Sinha, another Mau resident had an issue with the eligibility criteria. “I think the age window for eligibility should be 30-40 years,” he said, “18-year-olds aren’t mature enough. They do not have a source of income nor is it their age to earn. So it just doesn’t make sense.”

One resounding concern expressed by many was about the timing of the announcement of the scheme, with the first phase of the 2019 general elections now set to kick off on April 11. “If this was a well-intentioned move, they would have brought this scheme up before,” said local Ajit Sinha. He described an older scheme registration drive of an earlier state government that was held that promised to provide beneficiaries with bicycles, “A lot of people got themselves registered here,’ he said, “but not even one person got a cycle. There was only disappointment.”

Failing welfare schemes, especially those made during election season, aren’t a new phenomenon. In 2014, soon after Narendra Modi first came to power, he launched, with great fanfare, the Shramev Jayate scheme. Targeting unorganized sector workers, it aimed to provide unique identification cards to help them available various benefits like ease of access to Employees’ Provident Funds (EPFs). Today, the implementation of this scheme is virtually non-existent.

Another strikingly similar scheme to the PM-SYM was proposed by PM Modi’s government in June 2015. Called the Atal Pension Yojana (APY), it provided unorganized sector workers with fixed minimum pensions, depending on the amount of contribution and its period. By 2018, however, it had only managed to get 1.09 crore subscribers, which made up a mere 3.2% of the total unorganised sector workforce.

In 2019, the PM-SYM aims to have 10 crore subscribers in the next five years, despite the structural similarities between old and existing pension schemes for the same target demographic that have clearly struggled to take off.

Ajit Sinha, also convinced about the policy’s connection with the electoral game, was worried about the sustainability of the PM-SYM, “The scheme only runs for the duration of a government’s reign. Every time a new government comes to power, they instate their own schemes and change the old ones.” Sri Devi, who was standing in line at the service centre to get herself registered for the PM-SYM, echoed, “I hope it doesn’t happen that way – if the government changes, the scheme gets shut down? It would be like a betrayal.” A few others awaiting their turns at the centre had stoic ideas, an acceptance of being a mere pawn on the chessboard, “See, if we get the pension, well and good. If we don’t, then we’ll get our money back, what else”.

With unorganized sector workers already eligible for the National Pension Scheme, and the APY, it seems unclear why PM-SYM has been launched, especially if it isn’t going to be bringing anything new, in terms of expanded coverage or increased amount, to the table. And if this is nothing more than an attempt at vote-bank politics, then rural Mau is seeing through it.