Nutrition Rehabilitation Centres: Why Every District Needs One

Chitrakoot District. When Chureh Kasheruva village’s Sunita brought her 10-month old son to the N.R.C. in the Chitrakoot District Hospital, he was severely malnourished. While it is the Aanganwadi worker who is supposed to keep a check in her area and refer children to the N.R.C., Sunita found out that her son needed special attention only when she had taken him for a check up to a private doctor. The child is being treated at the N.R.C. since 1 November. Nurse Prabha Singh said that almost 60 cases have come to the N.R.C. over the last 6 months.

Uttar Pradesh sits close to the bottom of  a list of all the records of malnutrition in the states in the country.

According to government figures, 35% of the children in Uttar Pradesh are malnourished despite the fact that the state spends a whopping 3000 crore rupees every year on the Integrated Child Development Scheme. To tackle this dismal situation, the Akhilesh Yadav government announced a State Nutrition Mission on 2 November this year. The Mission is to be based on the model Maharashtra has been using since 2005. 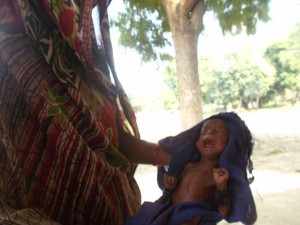 Banda District. Nurse David who manages the Centre in Banda said that 10-bed Centre rarely has a vacant bed. ‘Though the Aanganwadi worker should be sending children here, we get most cases when the pediatrician here refers them to the Centre.  We have treated 360 children in 2014 alone.’

In Jhabbu Purwa in Banda, the Aanganwadi’s helper informs us that there are no malnourished children in the village. But Suman from Jhabbu Purwa holds up her 2-month old child and tells us that when she was born she weighed 1.5 kilos but now weighs only a kilo.

Mahoba District. According to a survey carried out in October 2014, almost 27,000 children from a sample of 77,000 in the district were found to malnourished. The Mahoba District Hospital does not have an N.R.C. and if The Chief Medical Officer Dr. Vashney is to be believed, there are no talks about one coming up any time soon. Dr. Vashney said that there are more malnourished mothers than children. He simply blamed a lack of awareness as a reason for this state of affairs.

Faizabad District. Barely 125 kilometres from the state capital, Faizabad district has extremely poor figures for the Under 5 Mortality Rate and Maternal Mortality Rate. ‘In our own records, at least 42% children in the district are malnourished,’ said R.S. Chaurasia, the District Director for National Health Mission in Faizabad. ‘A proposal for the N.R.C. was passed almost a year ago but no worker followed. Some officials in the then District Administration found the space in the District Hospital unsuitable for an N.R.C. and so the paperwork got stuck there.’

As part of the National Health Mission, there is a provision to open a Nutrition Rehabilitation Centre (N.R.C.) in the District Hospital. The Centre, to be run by a doctor, a small nursing staff and a nutritionist is meant to admit severely malnourished children, treat them and at the same time train their parents to cook nutritious food for the children. In UP, the first N.R.C. in came up in 2010 in Pratapgarh district. Despite the grim situation, four years later, there are only 20 N.R.C.s in 75 districts in the state.