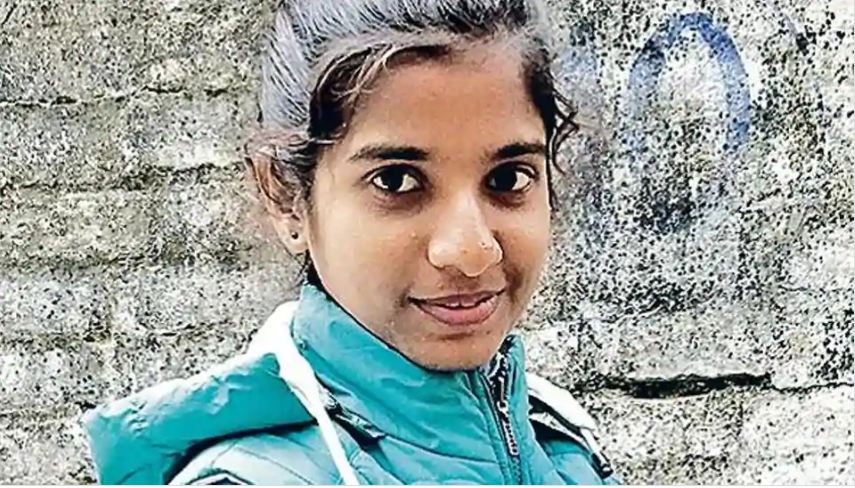 Yadav, who comes from a family of farmers and belongs to the OBC community, is the first woman in her family to complete a college degree and get a job.

Like many other young adults in the country, Kumkum Yadav starts her morning at a coaching centre. The 20-year-old Ayodhya resident enrolled after completing a bachelor’s programme in science (first division) from a private university in Tarun Block, where her family lives.

“Have you heard of [the coaching centre] Disha?” asked Yadav, reed-thin, wearing light pink lipstick and a bright blue hoodie, as she ties her hair into a messy bun. “It’s very famous, and students always get selected into some government post or other.” Her two-year-long course, which covers everything from Indian Constitution to geography, is for the civil services examination. “General Knowledge is my strong point,” she said.

Yadav, who comes from a family of farmers and belongs to the OBC (other backward classes) community, shares her dream of cracking the Union Public Service Commission, but she knows it is not going to be easy — in 2018, of the 800,000 aspirants who appeared for the preliminary examination, only 10,500 were selected to appear for the mains. The final list of candidates who make the cut will be less than 1,000.

“I’d like to work in the government, especially in the block or district level. There is a lot of ‘bhed bhav’ [discrimination] between general and backward castes. We are kept back; not given the same opportunities… [members of] the forward caste are given plum posts. They are the ones who have power and form the government,” Yadav said.

She has also appeared for examinations conducted by the Uttar Pradesh Public Service Commission (UPPSC), including the ones for posts in the state police and the Intelligence Bureau. Here, too, the competition is intense: candidates far exceed the vacancies. What’s more, the recruitment processes have been plagued with delays, and since 2018 — the year she graduated — it has also been under investigation by the Central Bureau of Investigation for alleged irregularities. According to news reports, at least 584 results and 19,000 recruitments since 2012 are under the scanner.

“Despite this, I am confident that I will give the best interviews, and no matter what happens or how long it takes, I will get a government job,” Yadav said.

Yadav is the first woman in her family to complete a college degree and get a job. Even before the end of her final year, she joined Khabar Lahariya, a news platform that covers local stories in Uttar Pradesh and employs women of underprivileged backgrounds. As a journalist, Yadav has access to officials, and exercises the right to question them. They don’t always answer, of course. Last June, an official told her to get out of his office when she asked him about the delay in distribution of pensions to disabled persons in the state. “He told me that he doesn’t give bytes to women.” Yadav included his refusal in her story, but felt its sting. “He was general caste, and he asked me my name,” she said.

Yadav also lives on her own. For the past four months, she has been staying in a girl’s hostel close to her coaching centre in the city. She pays her own rent, buys her own study material, and even manages to send some money home. She begins her day performing pooja, then goes to the coaching centre, and finally to work, often taking long bus rides to villages for stories. Back in her room, which she shares with another young woman, she cooks food on a stove, while her roommate cleans the dishes. This is a lifestyle that no other woman in her family, including her 38-year-old mother, Janaki Dulari, has ever had.

A digital native, Yadav’s mobile phone screen is filled with study and news apps and B612, an app that helps you take a selfie and share it easily. Her phone is also her work tool: a video journalist, she carries her microphone in her bag at all times. “There is no such thing as a holiday for me,” she said, en route to meeting her family in Meetanpur, 30km from Ayodhya.

Sitting in the open courtyard of the mud-and-brick house where her parents, grandfather, four siblings, three buffaloes and two goats live, the discussion revolves around the impending general elections, the alliance between the Samajwadi Party and the Bahujan Samaj Party, and the Ram mandir. Janaki brings a bowl of pakodas made fresh on the chulha and places them before us before she sits down on the floor. Grandfather Sheshram Yadav (75), seated on a plastic chair across his son, Yadav’s father, Tribhawan (42), swats away some flies.

A traditional Congress supporter, Sheshram’s loyalty now lies with the Akhilesh Yadav-led SP. Chief among his concerns with the current state government is its inability to do help farmers deal with stray cows.

“The public is swaying towards Akhilesh and Mayawati because the CM has not done much for the farmers. We’ve had it with all this stray cattle. They’ve destroyed the entire crop,” he said. In the past few months, at least four farmers have been killed by stray cattle in UP, even as farmers have taken to locking up stray cows in schools to stop them from entering the fields. Frequent attacks on farmers by Hindu right-wing groups to prevent cow slaughter — now, banned by Adityanath’s government — has led to the collapse of the cattle market.

Yadav isn’t against the ban — her first big purchase with her own money was a buffalo, whom she named Somi.
Yadav’s views on the current administration are not very different from her father’s and grandfather’s, but the sources of discontent are different. If it’s stray cows for Sheshram and Tribhawan, it’s youth unemployment and casteism for Yadav. The three diverge the most on the issue of the Ram mandir in Ayodhya.

What does the promise of a temple at the supposed birthplace of its God mean for someone who was born seven years after a 16th-century mosque was demolished to make way for it?

Growing up, Yadav often heard her grandfather talk about the issue. As a journalist, she covered the Dharam Sabha — a meet of Hindu religious leaders — organised by the Vishwa Hindu Parishad (VHP) in Ayodhya on November 25. The VHP has been one of the nodal organisations behind the mobilisation of support for a temple at the site where its workers demolished the historical monument on December 6, 1992. So Yadav can explain the anger of its supporters well. “The government is using the mandir as a prop to get votes and to build ‘josh’. If they really wanted to build a mandir, then they would have petitioned directly to the court. Instead, they’re delaying. Even their demand to give the land to the people who own it is a delay tactic,” she said.
Yadav thinks a government hospital should come up at the site, and serve all people irrespective of their religion. “I don’t want a mandir to be built there. It should be a hospital that everyone can use. Or if you build a mandir, then also build a masjid and a gurdwara. It will lead to a lot of bitterness if only a mandir is built. It’s important to maintain peace,” she said. “I don’t have an allergy to Modi,” she clarified. “He’s done a lot for the country, like the schemes ‘Make in India’ and even the Kisan Samman Yojana,” she said, referring to the Pradhan Mantri Kisan Samman Nidhi scheme which guarantees a minimum income support of ~6000 to small farmers, like Sheshram and Tribhawan.
But a lot of the schemes are on paper, she says, giving the example of her own investigation of some villages that were declared Open Defecation Free, one of the aims of the Swachh Bharat mission. “No toilet has been built, so how can they be declared ODF?” she asked.

Janki, who speaks after Sheshram leaves, says that she had voted for Modi in the previous assembly elections. “All the women in the village heard that the price of gold and silver will fall. Now all the women feel that Modi must go. The prices of essentials have increased a lot.”

“Development will only happen if each member of a family has a government job,” added Yadav. But she doesn’t reveal whom she will vote for. “I feel like everyone should get a chance. Rahul Gandhi is young, and so his thoughts will be different. And I feel like he will also do things differently. If I was there around last time, I would have voted for Modi because of all the promises.”

This article was first published in The Hindustan Times on March 11, 2019, and has been reposted here with permission.