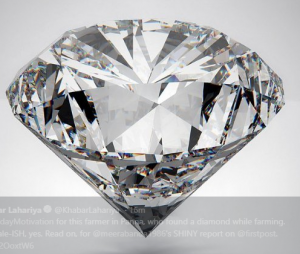 A shining fairytale of happenchance from the hinterlands unfolded, when a farmer stumbled upon a fortune while tilling his fields.
Like a desi twist in the tale, so exciting it could make for the plot of a big-budget Bollywood movie, a small farmer from the hinterlands of Bundelkhand stumbled upon treasure while working in his farm.
This is the story of Prakash Sharma – a small farmer from Janakpur village in Madhya Pradesh’s Panna district who has become something of a local celebrity overnight after he discovered a diamond in his fields, estimated at a whopping 30 lakh rupees.
Prakash, in partnership with two fellow villagers, had leased an acre of land on the outskirts of Panna in January this year for agricultural purposes. He narrates the story that has already become stuff of legend around these parts, “Farmers in this area tend to work in partnership. It is not really possible to do it all on your own, no one has the means or the resources for it. Two, three of us usually come together and lease a piece of land, and then we plough, irrigate and cultivate it as one. We often have to hire additional labour as well. So far, we have already invested up to 1.5 lakh rupees in this plot.” But little did he and his partners know what this fortuitous piece of land had in store for them.

Earlier this month, while tilling the land as usual, Prakash found a shiny 12 carat diamond. He immediately turned it in to the local diamond authorities, and is thrilled at the bright future prospects this will bring him. The superior quality of the diamond has been vouched for by the District Mining and Diamond Office as well, which has called it “a high-grade diamond worth lakhs of rupees”. He was at first frightened by the diamond, he tells us, not knowing what the protocol was and intimidated by its possible value.

It is the first time in his 32 years of farming in the diamond-rich Panna region that something like this has happened with Prakash. In fact, it is a first of its kind event, a storybook tale come alive. Prakash compares it to winning the lottery, and hopes it will help improve the life of his family. “In all these years, I have never found a diamond – that, too, one as big as this. Nevertheless, I was not going to be one of those who would quietly keep it with himself.  If the government has a right over it, then it must be handed over to the government. Since day one, I have followed a policy of complete honesty and integrity in all my dealings. Why should I run after black money?”

In such cases, the government usually gets a royalty from the proceeds of the sale. Sunil Jataw of Panna’s Diamond Office throws light on the procedure to be followed. “First, the diamond will be auctioned by our department, and both the government and the person stand to gain from the sale. A poor farmer, who toils in the field day in, day out, would be ecstatic to get a handsome sum of money with which he can feed his family and run him household comfortably. As for the government, it receives royalty at 11.5% of the sale price. Additionally, the government also earns the income tax on it, usually 1%. Therefore, the higher the price the diamond goes for, the better it is for all parties concerned.”

As for Prakash, he plans on sharing the money with his partners with the money and hopes to start a business with it. “It will probably sell for 25 to 30 lakh rupees, on which we will also have to pay tax. After dividing it amongst the three of us, each of us will probably end up getting 5 to 6 lakh rupees each.”
Prakash is visibly low-key while sharing this part of the story, “See, in today’s world of rising inflation and soaring prices, what is 5 lakh rupees even worth? So, we might just put it together and start some business instead.”

But the romance of Panna mein heera holds true. That Bollywood attention might just come-a-calling!