Farmers and Waive-Offs: A Case of Bad Déjà Vu

Part III of our new series, Epic Shit, presenting an overview and some analysis of the big tasks and asks of the now month-old government in U.P. 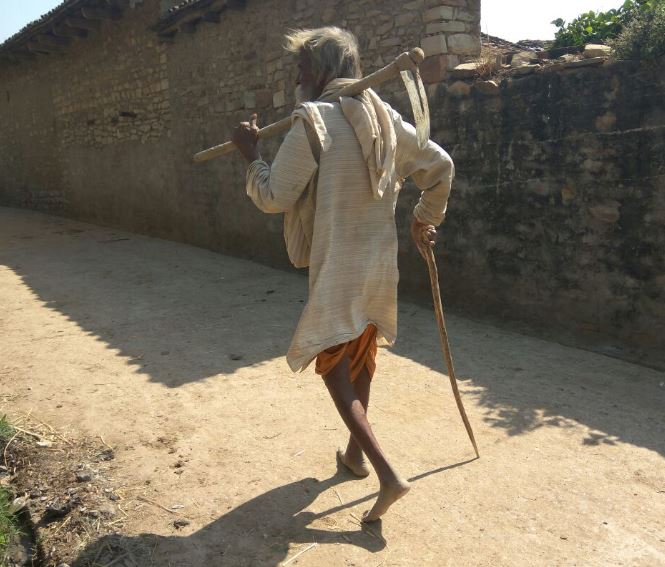 The lonely journey of a farmer in U.P.

The farmer in UP makes for a picture-perfect snapshot of rural life, if you’re a visiting photographer. And only then.

We’re all ostriches who only want to take our heads out of the ground to open our jaws to eat what farmers produce; we do not wish to concern ourselves with their lives and livelihoods, the burdens and struggles they face every single day, just by virtue of being farmers in the country’s most populous state.

The plight of the ordinary farmer in Bundelkhand is nothing short of startling, depressing, downright frustrating – a curious thing when juxtaposed against facts that tell you UP continues to be the second largest producer of rice and grams, and the biggest producer of wheat and potatoes, staples for diets across the Indian spectrum.

How come then, that nobody cares?

The newly-elected government in UP has recently indicated that they care, a lot in fact, to the tune of 30+ crores, to be precise. Introduced in the manner of a loan waive for ‘small and marginal farmers’, in the very first cabinet meeting Yogi Adityanath held amidst much fanfare on April 4, keeping true to an election promise that seemed to have worked well in his and his party’s favour.

After all, with over 50% of the state’s population engaged in agriculture, farmers are a crucial vote bank in UP. This hasn’t escaped any political party’s list of post-victory offerings, ever. Which is why this curious beast that is a farmer loan waive, is definitely not the first one the farmer in Bundelkhand has encountered. There was the ‘Agricultural Debt Waiver and Debt Relief Scheme’ that was launched by the UPA government in 2008 and the Samajwadi Party had announced a Rs. 50,000 waive-off in 2012. There are the Kisan Credit Cards (KCC), which enable farmers to procure some of the loans – yes, loans are encouraged by the government and then waived off by another in the lucrative game we call democracy in India – and innumerable relief packages and yojnas that are announced; some even executed.

But let’s be blunt. The Bundelkhandi farmer is drowning, and these are like temp lifeboats – you swap one for another until there are no more left.

In Bundelkhand, stories upon stories of sookha come to us every year upon year, no matter which cropping season. A 2014 report ‘Bundelkhand Drought – Retrospective Analysis and Way Forward’ revealed that ‘the region experienced a major drought in every 16 years during the 18th and 19th centuries, which increased by three times during the period 1968 to 1992’. By the time 2004 arrived, this became an annual affair, with all districts experiencing varying degrees of meteorological, hydrological or agricultural drought. Lands here get so dry, they even serve as perfect pitches for a good old game of cricket – we kid you not – the matches themselves acting as much-needed distractions from a perpetual drought that seems determined to kill.

If that weren’t enough, we live in a world where climate is as predictable as a motorcyclist on a Delhi road. Unseasonal cop-ruining downpours have been as harmful as drought for the Bundelkhandi farmer, olavrishti is another cuss word around these parts. And if it’s not that, there are the stray animals that charge through fields and ruincrops grown with sweat and tears – an anna jaanvar havoc, a regular feature for the kisaan. Yes, even in the age of frenetic cow protection.

And it’s not all natural phenomena. Tragic situations are lucrative, let’s be honest. And there is always a friendly stooge to make things smoother, the bank, the micro-bank, the block, village, neighbourhood representative of the bank and the microbank. The notorious moneylender, his network of go-betweens. And those are only off-record. Just as the official kotedaar cuts off ration, the official lekhpal, the record-keeper whose job it is to draft lists of names for compensation and the likes, who is as embedded in the dirty local network of caste politics and power, will record your entitlement, of land or compensation, at a cost, if you aren’t already a person of some status.

So, the access to loans, waivers, or compensation becomes somewhat less straightforward. Even ludicrous. We still remember Ramnarayan of Tendura village in Banda who climbed a transmission tower with the help of a rope and threatened to jump to his death unless he was handed muaavza. The stunt did get him the money, but he returned it soon after. ‘It was for 1500 rupees. It was a joke’, he’d said by way of explanation.

No wonder then that farmers find themselves pinned to walls, with nowhere to go, forced to do things. Engage in what are known as distress sales of their cattle and land (or just let them lose to ‘buffet’ feast on the fields, as per the ‘anna pratha’ in Bundelkhand, a practice by which cattle is left to fend for themselves in times of water and food shortage). Facing such grievous problems coupled with absolute government apathy, he often takes the call to up and leave town. An emergency decision, the reason why towns and cities are exploding, and village after village being transformed into ghost towns themselves. Also why it’s so often called and studied as the crisis of migration. In 2006, when we undertook a survey on migration across 24 villages and five blocks in Chitrakoot district, thousands of farmers, landless labourers were migrating out of their villages in droves. At least one person from each family had left for a town or city in search of more reliable livelihoods. But if in 2006, we found one person per household migrating, then, by 2016, when we returned for fresh data, entire villages were leaving.

This then, is the physical, material, and metaphysical grounds for farmer suicide. A survey conducted by the National Sample Survey Office (NSSO) told us that 40 per cent of farmers actively dislike farming and would have quit a long time ago if they could. Leading agricultural economists have told us time and again about the slow and certain decay of Indian agriculture that has brought once-prosperous agricultural communities such as the Jats and the Patels to organize agitations demanding reservations and government jobs.

The farmer loan waive off is one element drawn into this picture; one that clearly needs deconstruction. A majority of small farmers take credit through non-institutional sources, for instance, and practically speaking, almost anybody could queue up for relief due to the absence of verifiable paper trails.

But even these are mere logistics.

Loans also have avatars; there are crop loans, loans against warehouse receipts, produce marketing loans, KCC-based loans, investment loans. The 2008 waive-off comprised both crop and investment loans. The one just issued by the BJP only covers crop, which includes small and marginal farmers only, those with debts of up to Rs 1 lakh. (A fact to consider here: In 2013, the Supreme Court had passed an order that no farmer would be pressurized to repay a loan of upto 1 lakh rupees). Needless to say, this decision has got the big and bigger farmers miffed. As a farmer Visheshvar Kumar posed to us in Banda, ‘Are we not farmers then? We have had no crop, there’s been drought and flood, and our stores are empty.’ While the owner of a 28 bigha farmland, Kuldeep Singh of Mataun village, killed himself the very day the new Chief Minister announced the waive-off. He’d billed up 3 lakhs in loan, we learn. Local social activist Ashish Sagar argues against the efficacy of such decisions, that it harms the very people it’s allegedly setting out to protect. Plus, he points out the Math, ‘Why don’t we talk about interest here? When you can assess the likes of Vijay Mallya’s assets and property, that’s how you decide interest. What about these farmers, who are barely getting by? Why do we charge them with it?’. ‘It’s a crime against the ‘annadaata’, he adds.

There you have it. An empty ‘parampara’, perpetuated ad nauseum by generations of politicians. Here to stay until the death of time or of each and every farmer. Whichever comes first.