Examining collateral damage in the name of vikaas that really doesn’t seem to be for everyone.
A report from the district of Panna, Bundelkhand, Madhya Pradesh. 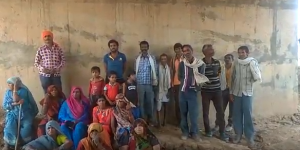 One of the stated objectives of the Pawai Medium Irrigation Project harnessing the Ken nadi, considered to be one of India’s cleanest rivers, and part of the Ganga basin, is to supply irrigation water to 9,952 hectares of agricultural land in the Pawai and Gunnor tehsils. However, if you ask the residents of two villages in Panna district’s Pawai block, it seems like forced displacement and a violation of human rights is the overt purpose.

Milan, of Simra Bahadur village Panna, one of the many who’ve been marked as ‘PAF (Project Affected Families)’, says, “I built my house here with my own hands. A letter arrived a month ago saying I need to remove it, I need to move away. Neher nikaalni hai (The stream has to flow through here).” A tone of genuine confusion lends his voice a muted volume, as he explains, almost patiently, waving the official document in our faces, “All this is fine, but we must get compensation. How can we just move without any compensation?” So, has there been no intimation around that, we ask, or talk of rehabilitation? His voice picks up the volume at that, “Yeh toh bhaga rahein hain, bas. (They’re shooing us away, that’s all).” Mira Bai, also a Simra Bahadur village resident, says, “They want to tear down half of my house, saying that they only need half – that’s 30 feet. How am I meant to live on 30 feet of land? I have 5 kids.” Bhura Singh, meanwhile, tells us that there’s been intimidation, “They threaten us when they come. When we ask for compensation, they push us away physically, saying nobody’s getting anything. They warn us that it’s best if we just up and leave.” He adds, defiantly, “But we’ve decided to stay put. Unless we’re given proper compensation or rehabilitation, we will not move. There are about 16 families here, and we’re in this together.” Singh also tells us that the trees have already been chopped off, and the bare, decimated landscape that greets us is proof of that.

Siddharth Agarwal, Social and Environmental Researcher, Veditum India Foundation, who first flagged the displacement issue for us on a walk-through he was part of, co-organised by SANDRP and Veditum India Foundation, tells us that the stream is flowing right in the middle of Nai Basti, “When the survey was conducted, the villagers ascertain that the stream was flowing in a different direction and that it was not passing through their village. According to them, the stream’s flow has been manipulated and that is what has caused this unfortunate development.” Siddharth is also mourning the loss of 150 amla trees that we hear echoes of, amidst the locals too, “It took this gentleman 20 years to plant all these trees and they’ve all been cut down, and there has been no talk of compensation for that either.”

Damodar of Karehi village in Panna district minces no words and labels them “goons” – he is referring to the contractors who’ve been hired to undertake smooth functioning and execution of the irrigation project. “There are about eight farmers who’ve been given some amounts of money as compensation, but it’s not enough.” Damodar has done his Math, “If we were to sell it as sanchit bhoomi (collective land), we would get 8-9 lakh rupees quite easily.” He’s got half of that, he tells us.

Siyaram, Simra Bahadur village Panna, is not the complaining kind. He tells us of the action he’s taken over the matter personally, representing the community’s grievances, “We traveled to Panna proper and participated in the jan-sunvaai. We met the SDO, the tehsil officer, any and every authority figure we could find. We wrote a letter here and the sarpanch has sent it, with all our signatures. Toh likhit bhi ho gaya hai, all the villagers have signed the panchnama.”

Whether the panchnama serves hordes of villages anything, remains to be seen. Until then, Milan, his family, and several like him, will continue to live and fight, as ‘PAF’s.