Forget the new state government shouting on about development and progress, what about the one village they’d promised to take under their wings?

The Sansad Adarsh Gram Yojna was launched by Narendra Modi amidst much fanfare a few months into his tenure as the Prime Minister. A “significant” date was selected – October 11 – famed social reformer Jaiprakash Narayan’s birth anniversary. Under this plan, Members of Parliament from across political parties choose a village from their respective constituencies and ensure it becomes a “model village”, by taking on the responsibility of developing the villages’ physical and institutional infrastructure, and completing it by 2016. This process is romantically also termed as “village adoption” – sansad god liye gaon.

In late June of 2017, Khabar Lahariya visited 3 such villages across 3 districts of Bundelkhand – Chitrakoot, Mahoba, Banda – to report on the on-ground status of development in them. One of the worst-affected regions of Uttar Pradesh, large swathes of Bundelkhand are still deprived of basic facilities, such as toilets, electricity, clean drinking water. And in the villages of Katra Kalinjar in Banda, Hanna Vinauk in Chitrakoot, Pipra Maaf in Mahoba, adopted by Bhairon Prasad Mishra and Pushpendra Singh Chandel both from the same political party that rules the state and governs the nation at the centre as well, the story is as dismal as any other “unadopted” place in the area.

The sad state of an adopted village in U.P.

Or even worse, according to Rajendra Kumar, resident of Hanna Vinaika village in Chitrakoot district, the very picture of fuming anger when he says, “I am shocked to see so many other villages in Chitrakoot that were so backward and have now been developed, like Cheebo and Khandeha in the Rajapur and Mau areas. But our village is stuck in a time warp, as if we were still living in the Rajwada era.” By which means the severe lack of basic amenities, like water, electricity, access to primary healthcare, education, and functional toilets – the last of which have the most adverse effects on young girls and women. As Radha, a resident of Katra Kalinjar village in Banda, tells us, standing next to a gaping hole in her courtyard, a sorry embodiment of the Swachch Bharat Abhiyaan, “The pradhan told us to have the toilets built and that the money would be transferred into our accounts directly. So we got the work started, but the money never came.” Her daughters are little, she says, but what about when they grow up, she worries. Shujaat Husaain laments on the state of the children’s education, “At this primary shiksha centre, kids only come for the free food and bags. Actual studies are next to zero.”

Bhairon Prasad Mishra, the BJP MP who has adopted both these villages, met us after weeks of us hounding his offices and relentless phone calls. In our interview, he put on a stance of flustered-busy mildly tinged with outright annoyance, but there were no concrete answers. “The adarsh graams are the ones to be given housing first and foremost, it is a top priority with the government”, he said at first. This was in response to an accident in the Hanna Vinaika village in which houses fell down and lives were lost – there are several who are homeless. But Mishra has no firm dates in mind. At least none that are in this year. “Everything that is pending will be completed by March 2018.” For a clearer picture on reports, Mishra promptly informed us that he didn’t have the paperwork on him at the moment, but that he would inform us later. Needless to say, that call never came. 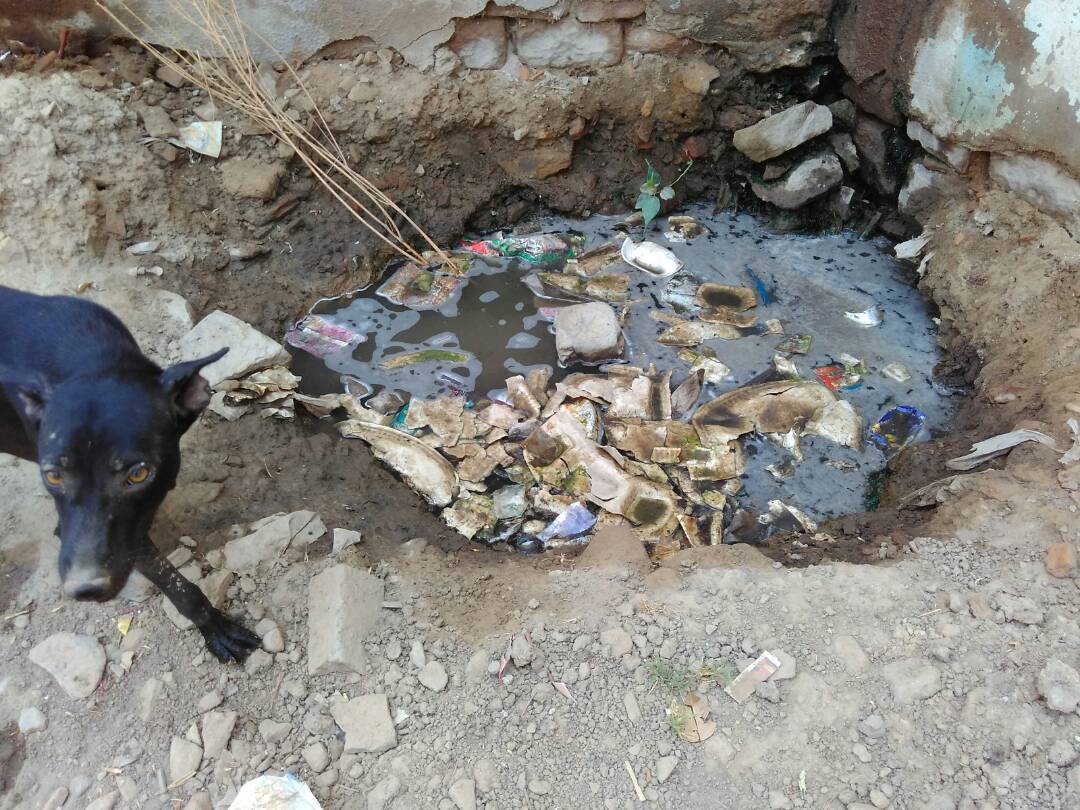 Hygiene is one of the key issues in these so-called adopted villages.

It’s more than we can say for Mahoba’s sansad Pushpendra Singh Chandel, also from BJP, who never responded to any of our calls or queries or requests and was always travelling. Last time we checked, he was out of the country. Chandel spoke for Pipra Maaf village three years ago and according to the residents, has remained an unseen presence. Here too, the problems are the same and added to it is the complete lack of access to proper roads. Everybody here tells us how in the monsoons, there is no possible way to get back home if they’ve stepped out. Pipra Maaf also looks like a ghost town because several locals have opted for migration, leaving their homes behind to go settle in Mahoba sheher and elsewhere. Sharman Prajapati tells us why that’s not an option or him though, and so many like him, “Only those who have some money can go. After all, who can afford to pay the rent in Mahoba city?” Ram Devi, who has lived in the village all her life, tells us she’s never seen any of the vikaas that all governments in U.P. swear by, during election time. She’s almost amused as she spouts, “There was nothing here 30 years ago. And there’s nothing here now.”

It’s a pity that policies almost never find fruition on the ground. But it’s such a big irony that villages specifically “adopted” by the movers and shakers of the government, are in worse shambles today. Kumar’s rage speaks for not just Hanna Vinaika but all of these when he says, “If the sansad ever appears in our village, we are going to beat him up. And then we’ll ask him, ‘Who the hell are you?’”