Up-close with the Chief Minister this week, who we discovered can be quite the heart-breaker

When he’s not busy blacklisting precious heritage monuments and striking them off tourism brochures, or retracting damaging statements and paying reverential visits to said monument in a monumental act of damage control, the Chief Minister of Uttar Pradesh it seems, is busy breaking hearts.

“Why did he cancel his visit to our village? Does he know how everyone here was looking forward to his visit? How can he do this?” Gaya Din Kortaay, resident of Kol Gadhiya village in Karwi, Chitrakoot, adapts a particularly strong nation-wants-to-know tone for his very angry rant about Yogi Adityanath’s recent visit to Chitrakoot that had a Kol Gadhiya stop on the itinerary, changed at the last minute.

We empathize with Gaya Din – after all, this is the Chief Minister’s first visit to Chitrakoot as Chief Minister and emotions are bound to be high-strung. As Khabar Lahariya Editor-in-Chief Meera Jataw who was shadowing him through the day, puts it, “He is our Chief Minister. There is a sense of ownership.” An ownership that translates to a peculiar kind of possessiveness and faux familiarity in Bundelkhand, which bubbled over in the term of affection the teeming crowds were using for him –Takla – so evocative of both tenderness and a naughtiness. “Hum toh takle ko dekhne aaye hain”, was akin to a chant on Chitrakoot’s streets on October 23 – the streets Yogi ji was sweeping in the now-achingly-familiar photo-op gesture for the Swachh Bharat Abhiyan. 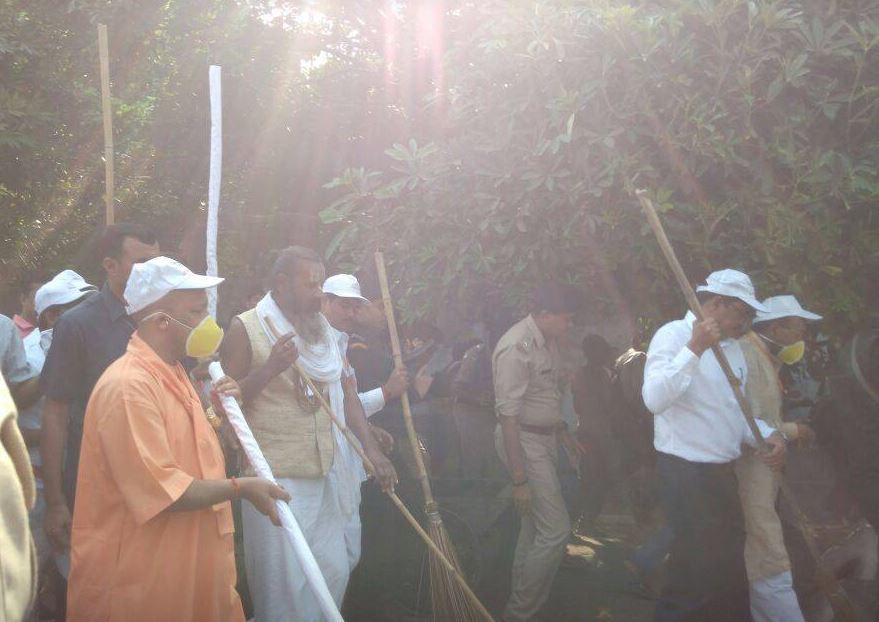 It was a busy day, it was a busy trip. The Chief Minister partook of the ritualistic evening arti at the dham, but of course – Ram has witnessed an energized revival in the times of Yogi, who also orchestrated a “bhavya Deepavali” in Ayodhya recently featuring a re-enactment of the Pushpak Vimaan descent, and a record-breaking diyas-on-ghat, among other things.

But the whoosh of saffron left Kol Gadhiya hugely disappointed. “People are refusing to eat”, is how Gaya Din’s rant ended, even as we picked up on the conspiracy theories next. Nand Kishore cites the corruption of pradhans as the reason for his change of plans, “They must have got it cancelled last-minute deliberately fearing of what we would say. Kahin hum bata na de unko, ki khaake baith gaye hai sab. Kahin likha-padi na ho jaaye (Lest we tell the C.M. about how everyone has taken bribes here, and we put it on record.)”

According to the village residents, not a single MLA, legislator or officer has paid a visit to this village, ever. But in the last 15 days, Kol Gadhiya has seen a lot of action. “A lot of work got done here, very, very fast”, is an overriding sentiment. And Khabar Lahariya reporter Naznin who often reports on Kol Gadhiya as part of her beat says, “Work that had been pending for 20,25 years – they have managed to complete it in 15 days!” There’s a lot to be grateful for in a CM visit, it appears. As Karwi MLA Chandrika Prasad Upadhyay explained with just a hint of a smile, “There was no need for the rush actually, because we’ve been given time until December to fix all this. But the officers panicked and the work was completed in that state.”

Something that Banadi village in Chitrakoot also knows about – the chosen gaon on the C.M.’s Karmabhoomi trip that witnessed a kaya-palat to write home about. According to Banadi local Ram Lal, “Everyone is coming here. The B.D.O, the C.D.O., even the DM saab, everyone, has come here.” Have any department officers or heads paid them a visit before? “No,” he replies, adding, “No one has ever made an effort to see the actual condition of our village.” Meanwhile Shankar Prasad is marvelling at all the electricity poles. “Electricity connections were fitted today”, he says. Babu Lal tells us of the marvel of constructing a building “in 6 days flat”, just in time for the big show.

Such lighting-speed work raises several questions though, and not only to do with quality and accountability, but we had to suffice with a supremely quiet demeanour instead. In an anomalous move, no press cards were issued for the big C.M. visit and Yogi ji brought his hacks along. “They came with him from Lucknow, and they were the only ones who were given a few bytes”, nods Meera, alluding to one of the country’s biggest mainstream Hindi news channels that has been so close to the Chief Minister throughout his state-brahman, you could confuse them for his entourage.

So Meera prodded Upadhyay some more. Sitting comfortably on his divan, the BJP Holy Trinity of U.P. plastered on the wall behind him, the Karwi MLA finally revealed the big mystery of the last-minute Kol Gadhiya rejection, “The road to that village was not in a proper condition, so we couldn’t arrange for the cavalcade to go there. And it would have taken a lot of his time had he walked. There are time restrictions.” Even as he had started speaking though, our minds went: The fury of Gaya Din, check.

We move onto Nand Kishore’s allegations at Banadi village about corrupt officials, but Upadhyay brushes those aside as “rumours”. “They haven’t done anything that proves they are corrupt,” he says.

As the dust on the Yogi visit settles and the dirt comes right back where it was swept away by the man himself, we watch the banners come down. Life resumes back to the Bundeli normal. The Chief Minister goes forth to Varanasi and Agra, spending moments of reverence at the graves of Mughal emperors and their wives, extolling on the virtues of the Taj Mahal, built by “our sons”. Kol Gadhiya residents break their alleged hunger fasts and hanker after non-existent roads. Banadi’s youth speaks up against corruption and perhaps make their plans for a mass exodus. 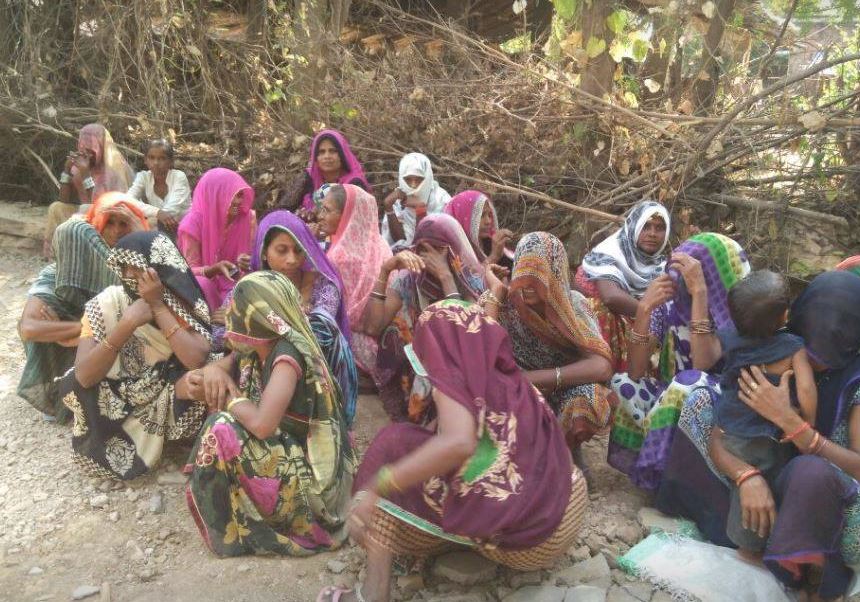 Women waiting for the C.M. in Vinakypur, list of woes in tow

Hazaaron khwaishein aisi is an emotion too. We see these reflected in the faces and expressions of those who waited hours and hours for a glimpse of Yogi Adityanath. Those who spent all of October 23 hoping for hope, in the glimmer of saffron and a bald pate. Bittu from Banadi is only too willing to quit ODF forever, but “there are no toilets” she says. Sodhiya Sidhpurath had trudged along for her three-word verdict – “koi vikas nahi”. Ajay from Tauraha village had another unique problem he wanted to share with the C.M., one of those surreal after-effects of notebandi, “I want to ask him about the coins.” Determination writ large in his eyes, he adds, “I have many, many small coins, but no one wants to accept it. Shopkeepers do not accept these coins, banks turn us away. So what should I do with these coins?” 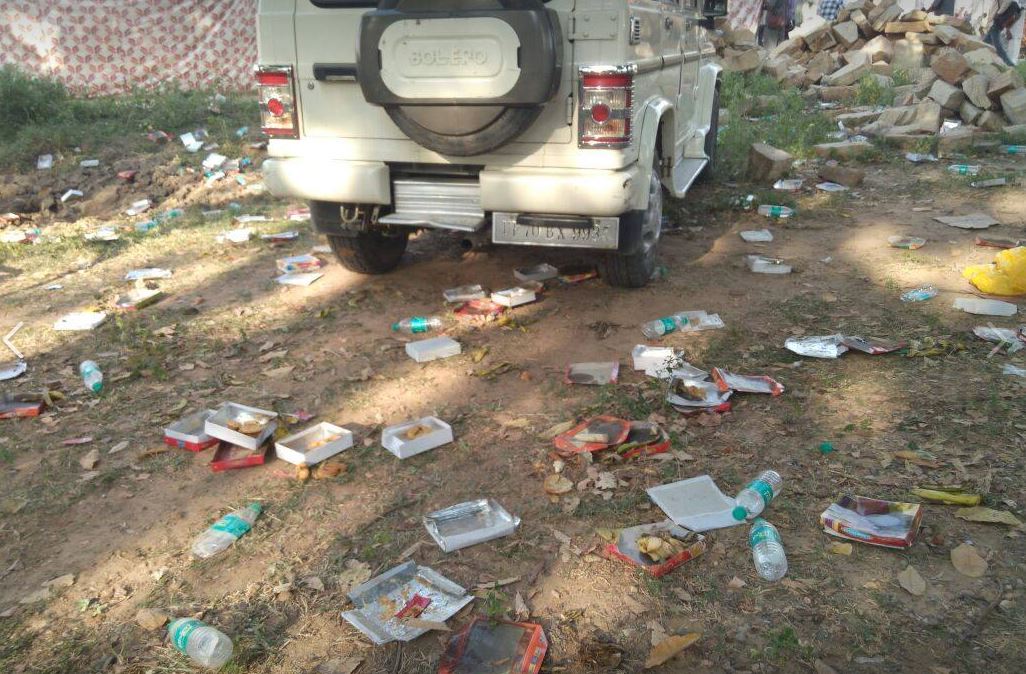 The mess on Chitrakoot’s streets, in the aftermath of the C.M. visit