Without Weighing Machines, No way of Recognizing Malnutrition 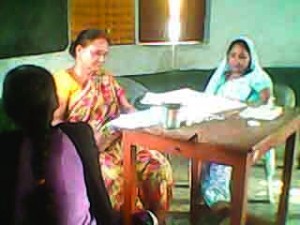 The Aanganwadi worker Indravati said that the machine at the centre stopped working 2 years ago. On the first Saturday of the previous month at the Immunization Day, no children or pregnant women were weighed as there was no weighing machine at the village. Indravati said that she has been trying to arrange for weighing pregnant women and children by borrowing the weighing scale from elsewhere.

She added that she had informed the supervisor about the weighing scale but no steps have been taken yet. Sangeeta, Shanti, Sheela and Vimla – all residents of the village also said that they have also been inconvenienced because of the absence of the machine.

The supervisor Ramjaanki said that there are 232 centres in the block but only 60 weighing scales were given in February 2014. All of these were distributed. According to her, since all machines come from outside, it has been difficult to find mechanics who can repair those that are broken or not working. Ramjaanki added that the concerned department has been informed and as soon as new machines are sanctioned and handed over, they will be distributed to the centres in need.

How Important are Drains in a Kasba?