Subcentre Remains Shut: Where to get Vaccinated? 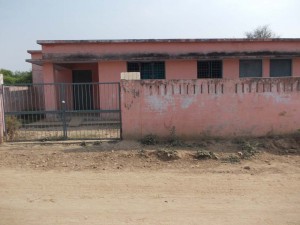 Andhora village, Charkhari bock, Mahoba district. The health subcentre in the village was built five years ago but has not been opened since. Women from the village have to make their way to the community health centre at Charkari block 18 kms away.

Shivcharan and Kamta Prasad from Anghora village told us that the subcentre was built in 2008. since then, it occasionally would be opened once in 6 months or a year, and remain closed the rest of the time. Sushila, another woman from the village said, ‘Whenever we need to get vaccinations, we spent 50 rupees on the fare to get to the community health centre at Charkhari.’ Shobha Devi added, ‘We were very happy when this subcentre was built, that we wouldn’t need to go all the way to Charkhari anymore, and our health needs would be served right here. But it’s been of no use that the health centre was made – it’s never open.’

The Additional Chief Medical Officer Dr. B.P Verma said that the subcentre opens on the first Wednesday and Saturday of each month. After this, accordingly to a monthly plan, the Auxiliary Nurse Midwife (ANM) goes to each village for vaccinations. If any pregnant woman has a problem in the meanwhile, she can dial 102 and be taken to any government hospital. There is a vehicle specifically for pregnant women. If the centre is not opening on the first Wednesday and Saturday of the month, then a complaint should be sent to the Deputy CMO, and an investigation will be done.

Budget Spent, but No Work Done – Bundelkhand Thirsty for Water

Are they Thinking about Mahoba?