So Much for Government Data: Residents Protest Inaccuracies in Socio-economic Survey 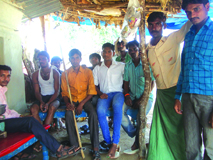 Banda district, Dadhvamanpur village. A survey which presents skewed socio-economic data of over 1000 families of Naraini block’s Dadhvamanpur village caused several people to approach the Tehsildar of Atarra tehsil on 21 October demanding justice. The survey was carried out under the Government of India in their area.

Lallu Singh, a resident of the Fatehganj tola of the village is one of the signatories to the letter submitted to the Atarra tehsil under which Dadhvamanpur falls. ‘I am from an extremely poor family but in the survey form it says that I own a motorcycle and even land,’ he said. Babu, Deshraj and Tijola have similar complaints. They are all daily wage workers who support their families solely by what they earn each day. But according to the survey forms they each own fields spread over a 100 bighas and a fixed monthly salary of 5,000 rupees.

According to Lala, the son of the village head Shanti, almost 90 percent of the forms from the village are similar false information. The Booth Level Officer (B.L.O.) Om Prakash responded to this complaint, ‘I have taken utmost care in filling the forms. It was when the information I filled in was being fed into the computers that all these mistakes have happened. It’s good that people have approached the Tehsil to file a complaint and are getting the information corrected.’

The forms for the socio-economic and caste census had been filled out in 2010. Filled manually through door-to-door surveys by the B.L.O.s, who first fill in information about each family. This information is then fed into computers by another set of people. To ensure that information gathered was accurate, the survey forms were resent to each home in the village. The administration had issued an order that families whose information was incorrect could file a complaint by 18 October. Residents of Fatehganj area of Dadhvamanpur village got to see their forms only on 19 October and were at the Tehsil on 21 October reporting gross discrepancies in the information about their status.

Rajendra Pandey, the Tehsildar in Atarra said, ‘The Tehsil is the place for people to file such complaints. We will try and get the date for accepting such complaints extended.’ He has not offered any other assistance to the residents as of now.