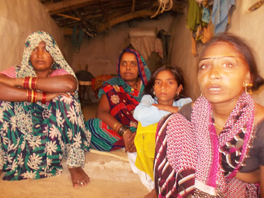 Chitrakoot district, Baktabuzurg village. Just before his school shut down for Diwali holidays, in an unfortunate incident, a Class 3 boy was electrocuted to death in Baktabuzurg village of Pahadi block in the district. While the incident took place during school hours, the Education Department has refused to take any responsibility for it.

Kamal, a Class 3 student of the government run primary school in the village, was attending school on 21 October. When he wanted to relieve himself, he took a short walk to a nearby field since there are no toilets in the school. There his trousers got entangled with a live wire hanging loosely in the field and he was electrocuted to death on the spot.

Kamal’s mother Tulsa blamed the school and administration for not providing basic amenities like a toilet for the students. ‘If there had been a toilet within school premises, my son wouldn’t have had to step out and the accident could have been avoided. It is the responsibility of the government and the administration to provide basic facilities like toilets and safe playing fields within the school boundary,’ she said.

Kamal’s parents informed authorities at the Pahadi police station of the incident. Siyaram, the Junior Inspector at the police station said, ‘We have recorded the information. If the child’s parents choose to file an F.I.R., a case will be filed against the school’s headmaster, Prabha Sahay.’ Meanwhile, an employee at the school informed reporters that the headmaster Prabha Sahay has been suspended after the incident.

Akhilesh Kumar Pandey, President of the Uttar Pradesh Primary Teachers’ Association, has given a cleanchit to Prabha Sahay. He alleged, ‘Last year, a budget of 70,000 rupees was sanctioned for building a new toilet at the primary school where Kamal was a student. But Ramesh Singh, the headmaster of the other primary school in Baktabuzurg, along with the Additional Education Officer (A.B.S.A.) siphoned off the money and used only a small part of it to repaint the old dysfunctional toilets in Kamal’s school.’ He added that once the matter was investigated, action should be taken against Ramesh Singh, the Additional Education Officer, and even the District Education Officer (B.S.A.).

Kamal’s parents have submitted an appeal at the Pahadi police station asking for their son’s death to be investigated. No arrests have been made as a report is yet to be filed.

So Much for Government Data: Residents Protest Inaccuracies in Socio-economic Survey