Bundelkhand had not even recovered from the devastating impact of unseasonal rains and the drought-prone region is now grappling with a severe water crisis as peak summer months hit north India. The extent of the crisis in this water-starved region is such that locals in the Mahoba district of Uttar Pradesh are digging tunnels to collect water seeping from the ground. This is the only source of water which the people can manage to access. 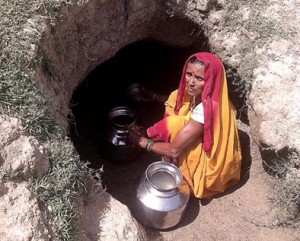 In Mahoba’s Khanna village, households in the Dalit basti Nagri Thok have not been provided connections to the government pipeline. Earlier, people found glimmering hope in the Chandrawal River, but the river has also dried up. Residents of the village are digging burrow-like wells near the river bank, known as churha in local parlance, to extract water from the ground.

In the hope of finding traces of seeping water, the villagers start lining up towards the afternoon with their utensils and buckets. ‘By evening the crowd for water is huge, so we start coming here in the afternoon to fetch water. We use small bowls to collect water seeping through the tunnel,’ says Dayamati, a local from the village.

After long hours of wait, what people get is saline, muddy water that is used for drinking and kitchen use. A water tank for the district was built in the neighbouring Hamirpur district, however, in the absence of pipeline connections the tank is of no use to the Mahoba locals. Poonam, who had come to collect water, said they did not have the option to think about quality when getting a bucket full of water itself was a distant dream.

For Halki Devi, who came to live in the village when she was just 15 at the time of marriage, nothing has changed over the last 40 years in the area. ‘I came to this village some 45-50 years ago after my marriage … since then the water crisis has been like this only. Whole life has gone into digging wells for water,’ the elderly woman spoke. 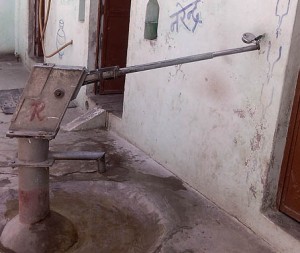 The situation in the Mahoba district is so grave that water has become the dividing factor between the upper caste and the lower caste, the privileged and the poor. In Shankapurva area in Kabrai block, people have locked their private handpumps so that other people cannot access it. While one of the handpump owners said that people damage the handpump with continuous use, locals from the basti said that the owners are mostly upper caste people who lock their handpumps.

While the National Rainfed Area Authority (NRRA) progress report on the Bundelkhand Package states that 2560 handpumps had been installed across the seven districts till 2012 by the Uttar Pradesh government, the maintenance and water availability continue to be unsolved issues. The report stated that none of the eight surface water schemes had been started. In 2014, Khabar Lahariya had reported the apathy of the administration in Mahoba where handpumps had been in despair even as the Samajwadi Party state government had spent over 10 crore on boring and reboring projects across the region.

The spate of crisis has been distressing for Mahoba especially as groundwater replenishment has not been viable. In 2012-13, Charkhari and Jaitpur blocks of Mahoba district were among the 165 dark zones of Uttar Pradesh – regions where groundwater level cannot be replenished. Ironically, Uttar Pradesh was also among the top ten states with highest budgetary allocation under the National Rural Drinking Water Programme in 2012-2013 with funds ranging over 1,960 crores for the state.

With a rich historical past of natural ponds and lakes, Mahoba is one of several districts of Bundelkhand in Uttar Pradesh. The entire Bundelkhand belt comprises seven districts of southern UP—Lalitpur, Jhansi, Jalaun, Mahoba, Hamirpur, Banda and Chitrakoot, besides six districts of Madhya Pradesh (MP). Due to its arid soil and dry conditions, huge amounts have been doled out under the Bundelkhand package – a sum over Rs 1500 crore since 2009. The package is aimed at enhancing watershed management, irrigation, drinking water, animal husbandry and environment programmes. With a range of other projects by central and state government running in the region, the National Disaster Management Report on Bundelkhand in 2014 clearly attributed to lack of co-ordination between the local and central authorities and shoddy monitoring.

Countrywide, the NSSO report in 2012 stated that only 46.1 percent rural households in India manage to access drinking water facilities within premises.