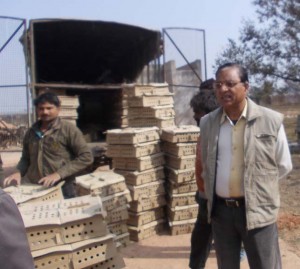 Ranipur, Sakraunha, Cheriha khurd and Jarvah villages, Manikpur block, Chitrakoot District. In these villages, on 14 January 2014, those families on the BPL (below poverty line) lists were given 50 chicks to raise, as a form of livelihood.

The Khabar Lahariya reporter spoke with the senior doctor, Dinesh Chandra Gupta at the Manikpur vetinary hospital about this. ‘Whoever has their name on the BPL list, is having their forms accepted by the pradhan. This is a form of livelihood for people. The chicks come from Lucknow, and those receiving them are given a 2-day training on how to feed them. In winter, they should be given warm water with jiggery, garlic and asafetida, and bajra – these help them grow quickly.”

Dashodiya from Ranipur village and Kunti from Cheriha khurd, and 10 others, who had also received the chicks, said this was a very positive initiative by the government. The chicks grow up and can be sold for up to 1000 rupees for a pair. This is a very good form of livelihood and can be used to run our households.

Education at a Standstill in Relief Camps