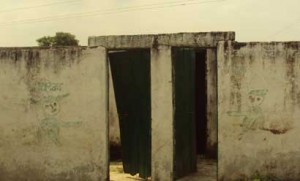 Banda district. A series of violent cases have alerted the central government to the need for toilets in rural areas – but in India’s most populous state, toilets in schools run by the state are in a shocking condition. Most primary and junior schools in Banda district of Uttar Pradesh have dysfunctional toilets or none at all.

In Badokhar Khurd village, there are 4 primary schools and 2 middle schools, and toilets in each of these are dirty and dysfunctional. A primary school student, Sonika said that the students have to use open spaces outside the school compound to relieve themselves.

In Dadhvamanpur village, a primary school and a middle school share the same premises. For hundreds of students in that compound, there are only 2 toilets, of which one is under lock and key and the other is broken. Devidayal, a resident of the village, said that the school teachers have complained to higher authorities but nothing has been done about the situation.

In Chhiraunta village, the middle school has 2 toilets which are both broken and haven’t been cleaned in months. The doors also don’t close properly.

The Coordinator for the Education Department in Banda, Ramashankar Mishra said that last time toilets were constructed in schools in Banda was in 2006. A list of the dysfunctional toilets has been sent to the District Public Relations Officer (D.P.R.O.).

P.S.: According to the guidelines laid out in the Right to Education Act, each government school is required to have 1 toilet for every 20 boys and 20 girls separately. According to a survey carried out by the District Information System for Education for 2013-2014, in Uttar Pradesh alone a total of 5,971 girls’ toilets are dysfunctional, while 3,852 boys’ toilets lack adequate facilities in these schools.