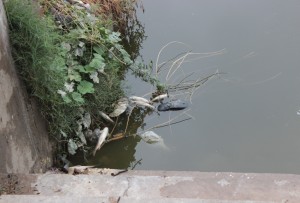 Khanna village, Mahoba district. In a district where groundwater levels are low, the lack of a proper drainage system is fast destroying the few water resources available. In the first week of October, Khanna village in the district’s Kabrai block saw quintals of dead fish floating in the local Sonu Lake. An inquiry has revealed the most likely cause to have been untreated sewage that was draining into the lake.

Home to around 20 homes with a population of 500 people, Khanna village is located just off the main road of Khanna town and opposite the local Police Station. Sonu Lake has been an important source of water for the village and the sole source of income for Ramratan, a resident of the village. Ramratan, a Dalit, has been managing the lake for the last decade. He and his family sell the fish from the lake to earn a living. ‘There are 6 members in my family and I have no other source of income. This is the first time in so many years that something so drastic has happened,’ says Ramratan.

Fish started dying in the lake in the last week of September. It was only when he and his sons started finding it difficult to deal with the situation, Ramratan reported the matter to the authorities. By the first week of October, the stench of the dead fish had become unbearable and water from the lake was completely unusable.

Ramratan says, ‘On 10 October, the Subdivisional Magistrate (S.D.M.) Rakesh Kumar Gupta, an official from the Fisheries Department and the Station Officer from the Khanna Police Station arrived in the village. They asked us to clean out the dead fish and then treated the lake by adding many kilogrammes of salt and potassium permanganate. They also had a pit dug up where we could bury the dead fish.’

Ramratan’s son, Pappu said, ‘No one helped us clean the lake. My father and I had to collect the dead fish ourselves. We took a boat into the lake and got it done. Now the administration has cleaned the lake but we lost a lot of new fish that were still young. Approximately 10 quintals of fish died in the span of a fortnight.’

Sub Inspector P.N. Sharma at the Khanna Police Station said that a case against unknown persons has been registered under Section 327 (voluntarily causing hurt to any property) of the Indian Penal Code. S.D.M. Rakesh Kumar Gupta said, ‘What has happened is mostly because sewage from all the houses in the area drains into the lake. This year it rained sparsely and so the concentration of sewage in the lake increased. Some people had also made makeshift toilets by the side of the lake. The gases produced due to the untreated sewage killed the fish. We have treated the lake for now and have removed the illegal constructions by the lakeside but there is no provision for compensation for Ramratan in this case.’

‘This year the lack of rain has exposed a very big problem. Our locality is largely a Dalit settlement and the village head, a Thakur, lives far from here. We have asked him a few times to get a drain made for the locality but he hardly comes here,’ rued Ramratan.