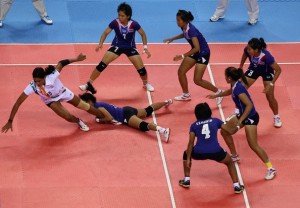 The build up to Diwali in the month of Karthik, in the Hindu calendar, is as special as the festival in many parts of Bundelkhand. A number of traditional sports kick start the festive season. As part of this – loud and popular – practice, rural women step out late at night, their days chores done, to enjoy a session of Kabaddi or Kho Kho.

In this season, Kabaddi is played by moonlight and mostly only in villages. Women come out to play after their families are asleep. The games are marked by a sense of liberation, singing and friendly jibes. Some hitch up their sarees, while others change into more comfortable men’s clothes to get into the game.

65-year old Siyadulari is a resident of Naai village in Banda district. She says, ‘When the husbands and children sleep, women start coming out to play. We usually form small groups and meet at a decided venue. Some of us old women are appointed as judges to ensure the game is played fairly.’ Many of the older women also sing during the games to encourage the players. ‘As the game progresses, we lose track of the time and before we realize it, the night is over,’ adds Siyadulari.

Neeta from Balapur village in Chitrakoot says, ‘Sometimes we also play Kho Kho. This is the only opportunity we get and we make the most of it.’

Note: Kabaddi, as a sport, originated in South India in the state of Tamil Nadu. While it gained recognition nationally between 1938 and 1950, it was Indian player Sundar Ram who popularized it internationally by taking the game to Japan in 1979. The first Kabaddi World Cup for Men was played in 2004 and the first one for Women was played only in 2012. The Indian Women’s Kabaddi Team won the World Cup in 2012 and 2013. In 2014, an effort to popularize the game was made by launching the Pro Kabaddi League which features 8 franchisees. The League features only all male teams.