Almost three decades ago, in 1993, the government of India launched a women’s literacy programme called Mahila Samakhya to educate women in rural areas. Although scores of women joined, the neo-literate students faced the challenge of continuing their education once the courses ended.

In Banda, a district in the state of Uttar Pradesh, some social entrepreneurs came up with a solution: Mahila Dakiya, a four-page broadsheet newspaper. The publication, whose name translates to “woman postman” or “postperson”, addressed the lack of reading material in local languages.

Mahila Dakiya was unique not just in terms of its content, but also in the way it created and produced that content. Breaking the barrier between “writers” and “readers”, neo-literate women were trained to write for themselves and for their peers, entering a world of print publication that had hitherto been dominated by men. Not only did the publication break caste and gender barriers, it also enabled the sustained production of reading material in local languages and promoted an overall environment of learning.

In 2000 Mahila Dakiya folded, leaving behind a hunger for information and a model of women’s empowerment. Once again, entrepreneurs began looking for a publication to fill the void created by the closure of the newspaper. Almost seven years later, in 2002, Khabar Lahariya was launched with a staff of seven women who wrote and produced a fortnightly newspaper in Bundeli and Hindi languages. The publication covered everything from local to global news.

This time, much research had gone into the launch of the fortnightly. The publishers and writers spent time reading and analysing reports in mass media publications. They found that local newspapers mostly covered accidents, inaugurations and murders. They decided to launch a newspaper that went beyond reporting these and covered more hyperlocal content that included policy issues. The objectives of Khabar Lahariya were to produce local and independent content, bring a feminist voice to local media, and establish women as journalists in small towns and villages.

During a heated debate at one of the paper’s editorial meetings, journalists discussed what it meant to be a feminist. The journalists had found during their research that often women were portrayed as bechari, or “helpless”, and in some cases besharam, or “shameless”. Khabar Lahariya decided to be different. It looked at the use and abuse of power by people, institutions and systems. Its priority became un-stereotyping gender, a departure and a stance that would both put into perspective and challenge other media. No more screaming headlines demeaning women of the kind often seen in local print and digital media, such as Do bacchon ki maa premi ke saath faraar (“Mother of two elopes with her lover”).

#SavitribaiPhule legacy inheritor, @MeeraDevi20, our Senior Reporter, who blasted the lid off a rural health story, a village suffering from T.B., with an admin in denial. https://t.co/ehmv7jiwdo Support her journalism. Sign up for just 399 a month! https://t.co/1DFGbrllhd pic.twitter.com/Ui6Q1ccZrE

Many wondered if the publication would take off. The district magistrate (the head of bureaucracy in Indian cities) of Banda did not think much of the project. His advice was to train women in making pickles and papad (thin crisps in forms of discs often made at home by women in India). He also suggested that they could apply for funds from the government as some members of Khabar Lahariya belonged to the Dalit (lower caste) and minority Muslim community, which made the organization eligible for government grants.

What the government official couldn’t imagine – then and now – was that the collective was started precisely to challenge this social stereotype that restricted women’s access to opportunities. It was launched to make a dent in the male bastion in the strongest possible manner. It was a collective that was committed to empowering and establishing women as reporters, editors, designers and photographers.

The new collective faced social and financial challenges. On one hand, it was trying to break the glass ceiling and storm a male bastion; on the other it needed financial stability, which was hard to come by.

Finding women reporters from marginalized communities in rural parts of Uttar Pradesh, one of the most populous but economically under-developed states of India, was perhaps only slightly less of a challenge than retaining them.

Staying independent in a media landscape not conducive to it – local news stories are often sold to the highest bidder, sometimes via advertorial campaigns, and often without any subtlety – and staying true to Khabar Lahariya’s principles and identity continues to be an ongoing struggle. 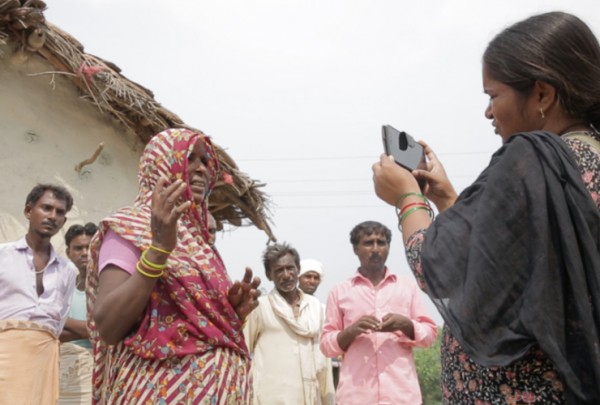 When Khabar Lahariya’s first covered stories on corrupt officials and murders by “dabangs” (highly influential local criminals), all hell broke loose. We received letters from them threatening to file defamation cases and reporters were told not to act “too smart” for their caste. While this meant that Khabar Lahariya had indeed emerged as a voice to reckon with, the very real physical harm that these threats and dangers can easily convert into, continues to be something that cannot be underestimated.

Going digital has exposed Khabar Lahariya further. Today, for example, if Khabar Lahariya reports on the nexus between the sand mafia and the politicians, reporters, who are now more visible on social media, are more liable to receive abuse.

• Read KL Banda reporter Shivdevi’s account of facing up to upper-caste men threatening her in a remote village, while she was on her beat.
• Read about the stalking episode that the KL team was subjected to, and how they responded.

Khabar Lahariya’s recruitment and training programmes are unique in both conceptualization and execution. The publicizing is done through word of mouth, in newspapers, on Facebook, via Whats App, and through NGO networks in the districts Khabar Lahariya is looking to hire. Applications are invited, and applicants are shortlisted on the basis of their basic qualifications, usually secondary or 10th standard school examination certificate. They need to be women, from rural locations, and preferably from marginalized backgrounds. Senior KL members travel to the districts to interview shortlisted candidates.

If Khabar Lahariya then feels a woman has potential (based on 15+ years of training rural women to be professional journalists in regions where there are none), then she is called for a training and an internship in Chitrakoot, Khabar Lahariya’s headquarters.

As an independent rural media house, Khabar Lahariya’s biggest impact has been to establish a cadre of full-time women reporters from marginalized communities in areas that still see no women reporters.

As a local media house that supports rigorous, verified rural reporting, in the district, state and beyond, Khabar Lahariya is known to produce trusted news, particularly in the context of a push towards quicker, easier, opinion-based media production, or even well-intentioned, progressive journalism, that sends (still usually male, upper caste) reporters from urban centres to cover rural news.

The Khabar Lahariya model has received more than 12 awards in the last 15 years.

Khabar Lahariya’s stories have had an impact at various levels: from bringing district level officials up to speed with the non-implementation of schemes in remote villages; to the initiation of an investigation into these issues; to actual tangible change on the ground.

Khabar Lahariya also believes in diverse definitions of impact. Telling the story of a violence survivor who may or may not be able to obtain justice; or of a victim of dowry murder are examples of what the role that independent, feminist media can play. We bring stories that need to be told, from diverse perspectives, into the public domain. Khabar Lahariya strongly believes that the ability of independent media from rural areas to exist and survive is impactful in and of itself.