Are you eating slow poison in the guise of green vegetables?

Kalinjar in Bundelkhand has been known for its great crop of vegetables. But the growing demand for food requires a supply that has made farmers take a quicker approach to results. While the vegetables look perfectly normal from outside, we took a closer look at what lies inside them and how it could affect us.

It takes just a few minutes of our time to pick the freshest vegetables. That is why it is easy to forget what it takes to grow a single piece of any vegetable. Geeta Devi, a farmer from Banda, has been doing the labour for years. “We have to prepare the land for sowing, you have to create the correct divisions in the plot for each vegetable, put manure in the correct proportion and irrigate regularly.” Krishna Kumar Kushwaha, another farmer, says it takes anywhere up to 3 months to grow most vegetables. “Now with the chemicals you can grow a radish in 40 days. Earlier that wasn’t possible.”

With changing farming methods, it is no secret that a lot of aids are used to grow vegetables faster. The earlier methods of using desi manure have been eschewed in favour of government-approved chemicals and pesticides. From creating their manure out of cow dung, urine and other by products, farmers now have a roster of medicines and pesticides that help them fight off possible infestations but also dilute the nutritional value of our vegetables.

“It takes just a drop of the hormone that is usually given to a buffalo to start lactating”, Kallu Baksh, another farmer takes the example of a simple bottle gourd whose size can grow exponentially in just a day with the help of this hormone. “That is how vegetables are grown. The vegetable doesn’t remain the same from inside. It’s a carrier for disease. Out of the thousands of diseases that humans are afflicted with, the cause of one-third will never be caught because of food like this.”

Disease-resistance has been a big selling point of hybrid seeds, pesticides and medicines. The labour-intensive task of raising crops was earlier afflicted by crops getting infected routinely. The crops now are not just sturdier but they grow quicker too, a side-effect that has now become the main focus of farming. Economics play a big role in an under-developed area like Bundelkhand. “We also put it because at least we get the vegetables. It takes money to do this. Earlier we didn’t have the money and no one expected these quick results. There was no need for the rush that we are in right now”: it’s a catch-22 for farmers in Bundelkhand who don’t have the luxury of resources to allow vegetables to grow at their own pace. Puniya Devi, another farmer from Kalinjar, says it boils down to survival, “We earn our living through these vegetables, otherwise how will I feed myself, my kids, my animals. Everything is much more expensive. We put the fertilizer so that the vegetables grow faster and we can earn money. It helps us survive, so we do it.” 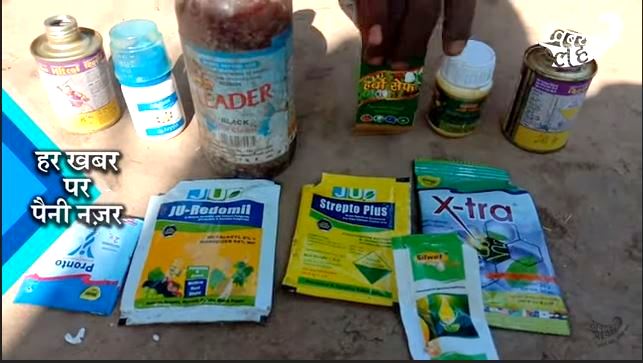 The question is whether the end justifies the means. Organic farmer trainer Shailendra Singh Bundela says that the biggest problem is that whatever harm is happening to us, is invisible. “We don’t know what these vegetables are doing to our body. It just has to go inside us once and it can weaken our immunity system over time. It has the potential to reduce our life span.” The general public has no knowledge of what is the difference between an organically grown vegetable and a vegetable grown using chemicals. Mr. Bundela’s go-to trick to check the health of any vegetable is to touch it gently with a light pressure. If it feels softer than its intended firmness, then there is a good bet that the vegetable was grown using chemicals and medicines. “An organically-grown vegetable has a different sheen on it. And it is neither too big nor too small for its type.”

Lack of proper education is not just on the consumer side. Farmers themselves are not always well-informed about the use of the medicines in the correct manner. The owner of Rajput Beej Bhandar, Balram Singh understands the importance of these medicines. “In the hands of the right person, these can do a world of good. But yes, there are some people who use injections or mix the growth hormone with pesticides. Or some farmers will sell their vegetables just a day after putting the medicines on them.”

From skin disease, common cold and cough, to serious conditions like chest pains, many diseases have been found to be linked to consumption of these kind of vegetables. One reason for that, as per Singh, is that these vegetables lack a lot of the micronutrients that a desi variety of the vegetable would contain. “Even though GM seeds have the strength to fight off insects, but when humans eat it, then the deficiencies it causes have not been analysed properly.”

Economics, ill-developed farming practices, and a growing demand for food, all have worked together to create a bleak picture of what is on our plate. The solution is not simple but general awareness that help us make informed choices can go a long way in keeping us healthy and our farmers in business.