“I’m No Less Than Any Other Politician.” 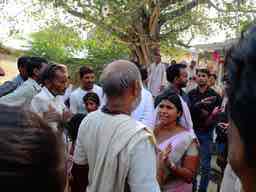 Zila Mahoba. Block Kabrai, Village Chhaani Kala. As we wait for the results of the DDC elections in Uttar Pradesh, Khabar Lahariya looks back to some memorable campaign moments.

The incumbent District Development Council president of Mahoba, Anshu Shivhare, stood for the ZP member position, and ran her campaign with some political astuteness. We spent a day with Anshu on her pacy campaign, a day before voting ended.

It’s quite a struggle finding Anshu Shivhare. We go to her house first. We can only see men – men lying around, men on the phone, men putting up posters. They don’t want to tell us her location. We head next to Kabrai, and from there to Pachparha village, where we meet her campaign manager Mahesh. Anshu says to us on the phone, “Only 2 days left for campaigning and we have to visit 32 villages – we’re going very fast. Not sure if you’ll be able to catch us!”

Finally, after following her brother, driver, and PA, Birju, for four hours, reaching villages moments after they’d driven off, we meet her campaign team in Kaimha village. Striding ahead, Anshu and her team have their gazes focused on the walls plastered with posters. Anshu Shivhare is repeatedly expressing her annoyance at people putting their posters over hers. “This is not allowed – this is dirty politics.”

She may be running for a Panchayat position, but in her campaign, Shivhare is expressing her thoughts about the state of national-level politicians and politics. “Today’s politics are all about defaming other people.”

With great speed, Anshu ducks into house after house and interacts with people like a veteran politician. Skilled at building relationships, Anshu makes various people her Didi, Chacha, Dadi, and Mami. “Mahoba’s daughter, your bahu, is here at your door.” Reminding them of her cup & plate election symbol, she says, “If I win, you’re all invited for chai!”

People meeting her don’t want to miss an opportunity either, and they tell this political visitor about all their problems and struggles. Anshu calls Anand, a young member of her campaign team, and quickly has their problems noted down.

It’s easy to see what an agile, experienced politician she is.

We ask her why she decided to stand in the election. “To influence politics and to communicate with the people. But it was never my plan that I would get into politics. I’ve done a B.Sc., a B.Ed. and an MSW. I wanted to become an engineer or a teacher. Five years ago, my husband was told to stand in the elections, but it was a seat reserved for women, so he had me stand in the election instead. When my husband was involved, I used to do the district-level work, and he used to do the work of travelling in the region and meeting with people. From him, I learned how to conduct meetings, give speeches…he was the one who used to talk to politicians – I just did namaste and smiled. However, for the past one year, I have been doing everything myself. My opponents thought I would get suppressed by him. But I didn’t.” Next time, she wants to run for the 2017 Vidhan Sabha elections.

We reach Kharka village by 6. There is no electricity in the village. By starlight and by the lights of several torches, Anshu continues her campaign work – meeting people in every galli, giving speeches. Last time the elections happened, this village gave her a huge majority of their votes. But they’ve been struggling with electricity, and now they’re angry. Anshu listens to what everyone has to say and then talks. Her speech is very different from that of male politicians. She shares her own problems, and speaks openly about her situation for the last few years, and asks forgiveness for not addressing their problems sooner.

Is there a difference in the political work of men and women politicians?, we ask. “Men are dirty politicians – [they indulge in] false allegations, taking people to court, bribery and corruption. My politics is different. I get work done. I ask people what they need. My political work is all about development. The women in this area aren’t able to stand up on their own. They are kept down by society, and the main reason for this is lack of education. If a woman has education, she can speak, she can argue.”