‘The Infamous Dr. Kafeel’, and other tales from inside UP’s Health System: A two-part video series from Gorakhpur and Bundelkhand, in exclusive partnership with Firstpost 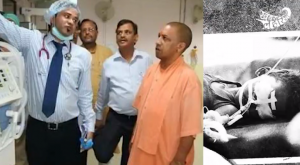 “No one is dying from disease or any other circumstances. Everyone is dying due to the doctor’s negligence? How can this be?”

Spoken to the point by Dr. S.K. Tiwari, the Chief Medical Officer in Gorakhpur, it is illustrative of the very particular and peculiar state of medical affairs in the current scenario, wherein the term ‘medical negligence’ is bandied about easily.

Too easily, if you speak with those who’re at the receiving end of the chaos and panic that underline the morbid truths that are half-concealed inside a sarkari hospital.

Such as Dr. Kafeel Khan, the doctor in charge of the encephalitis ward at BRD Medical College, who looks us in the eye and asks, “After spending nine months in jail, it was said that no concrete evidence has been found against me. Then why did I spend those nine months in prison? I have no idea.”

10 August 2018 is a year to a tragic incident that pulled healthcare in Uttar Pradesh, the most populous state in the country, into the spotlight of mainstream media. In the week of 7th August 2017, 63 young children, including at least 24 infants, died in Gorakhpur district’s BRD Medical College Hospital, a state-run facility specialising in the treatment of encephalitis. The story triggered massive national outrage, around the facilities and (lack of) attention paid to healthcare for remote and disadvantaged communities. This was intensified by the fact that the Chief Minister of UP, Yogi Adityanath has been a five-time MP of Gorakhpur. The same Adityanath has been travelling across the region since May, with promises of funds and infrastructure, and aiming to eradicate encephalitis from the state.

Our sustained focus on rural infrastructure and entitlements looks at the system from the inside, with horrifying and exclusive testimonies from those who work in the system and often bear the brunt of it. From across Gorakhpur and Bundelkhand, Gorakhpur: Ek Saal Baad hears out the doctors’ side, and weighs in on accountability and the complexities inherent in it.

As Dr. Kafeel, whose license to practice medicine remains revoked, says, “19 letters and reminders were sent out (by the company that provided the oxygen supply), from the District Magistrate to the Chief Minister. None of them took any action, and none of them can just was their hands off this.”

This is Part One of Khabar Lahariya’s special series, Doctor aur Swasthya Seva, an investigation into U.P.’s healthcare system, in partnership with Firstpost.