On Republic Day, we hark back to the time we went around the kasbahs of Banda asking about the man known as the Father of the Constitution 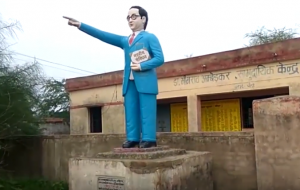 The mandatory Ambedkar statue in Banda asks us if we truly remember?

It is a fact, an axiom, of human nature that the letter of the law almost always, if not always, rides over the spirit.

We especially love to follow this rule when it comes to our national icons—something about them being in perpetual freeze-frame mode through the aeons as “national icons” makes it all the more convenient. It is perhaps most true of Dr. Bhimrao Ambedkar, referred to as the “Father of the Constitution of India” by every schoolchild worth his or her rote-power-as-per-CBSE-syllabus.

However, we encountered a sorry truth in a district of rural Bundelkhand, where even the Dalit population—the very section of society Ambedkar belonged to and worked for—is either clueless of his legacy or steeped in the lip service game.

Every little village and kasbah here in Banda will have this mandatory statue of Ambedkar…but what of his ideals?

“Every little village and kasbah here in Banda will have this mandatory statue of Ambedkar,” says chief reporter Meera Devi, standing in front of one such said statue that adorns the yard of the community centre in Mohan Purva village. “But what of his ideals?” she asks.

Several locals interviewed professed little to no knowledge about Ambedkar, and amidst mumblings of “koi mahaan aadmi the (he was some great man)”, Meera decided to meet those who profess the strongest kinship to Ambedkar’s values. After all, he is invoked most often during election time, as an urging and a call to mobilisation of the precious votebank. If you feel a distinct channelling of Ambedkar’s name and principles, a vibe, then, rest assured, you’re attending a political speech in Uttar Pradesh!

“Of course he was a great man, so he has great importance for us,” begins Lallu Prasad Nishad, the district head of the Bahujan Samaj Party in Banda, the one party that lays claim to Ambedkar’s legacy in the state—not least because the party’s founder, Kanshiram, rose to power as an activist for the oppressed, first. And not least because the current party head – though the term supremo befits her best – extols her Dalit roots every chance she gets. Nishad continues, “Not only for us actually, but he is a man of great importance for the entire country.”

Press him on facts and Nishad mouths the usual truisms about Ambedkar’s contributions to our “constitutional rights” and “chances at a better life”. RP Chaudhuri, manager of the Sangh Mitra Baudh Vihar in Banda, expresses grief that such an important icon is all but forgotten, before telling us how “Baba Saheb sacrificed everything for the country”… and all that “only to fight discrimination.”

A fight rendered purposeless it would seem today. In a state that’s still reeling from acute inequality, most pronounced in gender and caste discrepancies, the leader who fought to eradicate it and balance the skewed ratios, is seldom remembered for his achievements.

If you feel a distinct channelling of Ambedkar’s name and principles, a vibe, then, rest assured, you’re attending a political speech in Uttar Pradesh!

That he fought for years to ensure the Hindu Code Bill was passed, one of its key features being the eligibility of women to inherit family property. That he spearheaded the first community Satyagraha, even before Gandhi’s Salt March at Dandi, leading the Dalit population of a small town in Maharashtra to the lake to drink from it, symbolising emancipation. This was in 1927. It is 2017, and we encounter cases everyday in Bundelkhand where untouchability is practiced—the local store owner still asks certain members of his village to “wash the Pepsi bottles” when they return them to him, and at big weddings, there are separate sections marked out for Dalits to eat in.

And yet, we think of him most as an idea. “Baba ke sapnon ko poora karna hai (We have to make Baba’s dreams come true),” sings one Indian Idol-type aspirant at a BSP gathering, and takes a deep breath before delivering his killer line, “Miljulkar BSP ki Sarkar banana hai (We need to band together to create a BSP government).” Another time he’s most remembered is of course during Ambedkar Jayanti when schools are off and even government departments refuse to work.

Meanwhile, as Meera passes by the statue again, she pauses to gaze up at it. We look up to see him holding the Constitution, cradled carefully in his arm, mindful of the importance, the sacredness of the tome he helped draft with so much deliberation. And his other hand has a finger pointing straight ahead, showing us all the path into the future—free of divisiveness.

The utopic vision is disturbed as soon as a roosting pigeon settles itself atop his head.