900 million people vote this general election, the largest election in the world, for 543 seats and at over 10 lakh polling stations in the country. While the country keeps its eyes and ears on candidates on the campaign trail, shooting their mouths off, KL travels across Uttar Pradesh, the state that sends the most MPs to parliament, to ask about whether voters know that they have an option, if none of the candidates seem appetising – the None of The Above option on the Electronic Voting Machine.

It was in 2013 that the Supreme Court ruling on the None of the Above (NOTA) option came into being – that it be a valid choice available to voters. It came after a notice submitted by the Election Commission, and a supporting public interest litigation filed by the People’s Union for Civil Liberties in 2009. The 2014 general election saw the option used for the first time, and 60 lakh voters (1.1%) chose it. 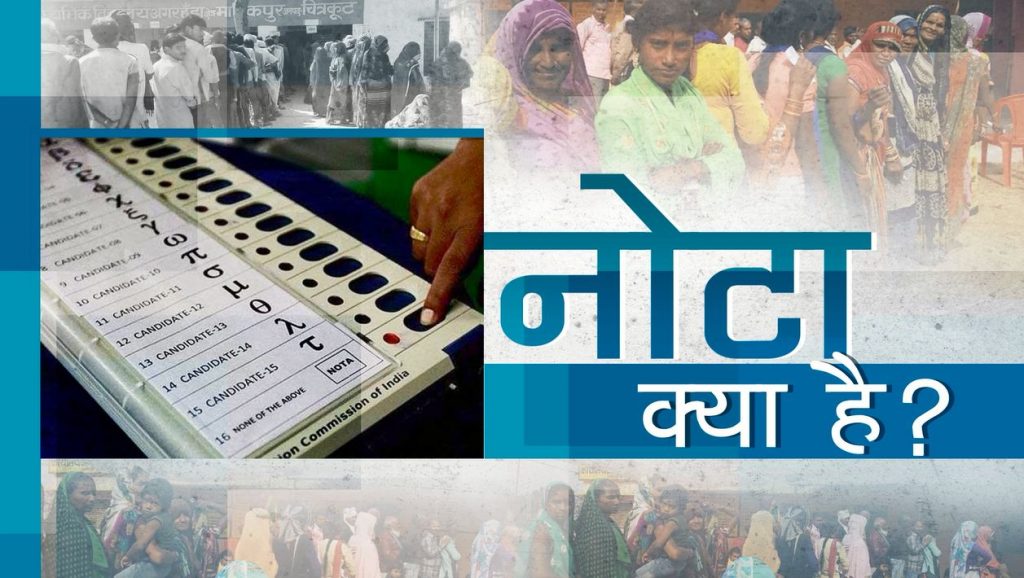 In a region where dacoits and their sons and brothers are also political candidates, parties and politicians are seen once every few years, development and progress seems to have passed by, and shining, smart cities are light years away, boycotting the election in protest has been a common tool for citizens on the margins to make a point.

But do they know that there is an option to register their protest at the ballot machine? Armed with this question, we set off on a vox-pop quest.

We meet Jitendra Kumar from Mahoba who knows all about it, and has used it all of the four times that he has voted. “If you don’t like any candidate, you can press NOTA. I’m using it this year too. You ask why? Why do you think? We’re educated people, and we’re out of work. No party is going to work for us, we know it. So I’m pressing NOTA and I’m going to tell all my friends to do the same.”

Salim Ahmad from Mahoba has used the option more moderately, i.e. to say once in the last assembly elections in U.P. Is he considering it this time too? “I’m not interested in the party, I’m interested in which local candidate is going to work for my constituency”, he says, and adds, perhaps hinting at the general elections, “No development happens in our area, if it happens, it happens on paper and never reaches people. Candidates who are from outside do nothing to improve this, and so I’d rather use NOTA.”

But the knowledge about NOTA, like much else, seems to be restricted to the men, especially the young and educated ones, and those living in kasbahs or small towns, as opposed to the rural interiors. Munni Devi from Mahoba, close on 80 years old, and an old hand at the voting game, says she has encountered pressure cookers, elephants, cycles, palms, lotuses, while voting through the years, but never NOTA.

Mahendra Singh from Chitrakoot, offers his view on the subject, “If we don’t like a politician, and when we know that he isn’t working for the people, we don’t have to vote for him. We can simply use NOTA.” He confesses that he’s never used it himself though.

Advocate Rajmani Chakravarti, at the Civil Court in Ayodhya, is of the view that NOTA is a good initiative driven by the government and the Election Commission, “If a voter doesn’t think there’s a worthy candidate, they can use this NOTA option.”

Voters are also aware of the strength of this option, according to Anil Kumar from Chitrakoot, “We’re citizens of India, and we can say that we don’t think any of the politicians contesting – MPs or MLAs – are any good. We can say that we don’t like their work by exercising this right.” Rajesh Pal from Fatehpur corroborates, and views NOTA as an affirmative choice, “NOTA means that we don’t like any of the candidates, but we also want to mark our presence as voters. We want to exercise our right to vote.”

But, despite the 0.73% (close to 10 lakh) voters from U.P. who went with NOTA in the last general election, there is still some lack of clarity about this option, “I used it last time”, says Mathura Prasad, from Chattarpur, “I actually thought it was a candidate. But I don’t think those votes get counted anyway.”