In a report in 2011, the World Bank had stated that almost 59 percent supply of the public distribution system (PDS) fails to reach households in India. The World Bank attributed poor supply of the PDS to uneven implementation and high leakage in the supply mechanism. Currently, even as the PDS system has been brought under computerized monitoring for tracking supply and the National Food Security Act 2013 is working on targeted PDS, stories from Uttar Pradesh’s Bundelkhand tell us why the poor still remain unfed. The situation at the fair price shops, the role of Kotedars or ration shopkeepers and lack of grievance redressal leaves the system faulty. 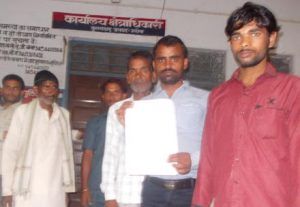 Over the last week in Mahoba district of Uttar Pradesh, Nandlal Singh Patel, Mahendra and Devendra have been complaining against the region’s kotedar (local dealer) Harishchandra at the Kulpahad tehsil. The men have been running from pillar to post to complain about how almost every week the area kotedar does not supply ration and oil properly. The matter has also been taken up with the Supply Inspector, but no action has been taken so far.

‘The kotedar opens the shops as per his whims. It has been like this for a year, the shop opens on just two days in a month. We go without food for days… finally we took up the matter with the tehsil. The Supply Inspector found quintals of grains in sacks left unsupplied, but nothing has been seized,’ one of the men said. The villagers from Panwadi block are demanding strict action to be taken against the kotedar. With no progress, Sub Divisional Magistrate Muhammad Rizwan has assured that a re-investigation of the matter would take place.

This is not the first time that kotedars have been at the centre of ration supply embezzlement. While a kotedar is the key point where government’s supply of grains and fuel are allotted, how this reaches households is a complex issue. In 2014, Khabar Lahariya had reported about several other instances where the supply was siphoned off at fair price shops. In Mahoba’s Jaitpur block, the villagers complained that the kotedar opened ration shop only on two days in a month. The kotedar had been operating the same way since 16 years in this Dalit village. Almost 50 kms away from Mahoba, the situation is not much different. People in neighbouring Banda district’s Naraini block say sacks of ration supply items remain locked in local shops. In September last year, the matter was also raised at the Atarra tehsil for further investigation.

Under Targeted Public Distribution System (TPDS), the central government and state government work jointly to bring grains and other essential ration items to poor households. To track the procurement, allocation and transportation of food grains to Food Corporation of India (FCI) depots, the centre has allocated Rs 80 crore in this year’s budget.

However, a significant task lies after this as the operational responsibilities for ration supply are relayed to the state government. This involves identification of below poverty line (BPL) families, issuance of ration cards, and distribution of food grains at subsidized prices through fair price shops.

According to the Ministry of Consumer Affairs, Food and Public Distribution, there were 5 lakh fair price shops across the country in 2011. With over 73,000 such shops in Uttar Pradesh itself, experiences from Banda and Mahoba districts tell us why transparency and accountability at the grassroots scale are critical in ensuring a fair and adequate supply of food to the poor.

Banda: Man Shoots Wife Over Dowry, Booked for Homicide ‘Not Amounting to Murder’