Dimple Yadav notwithstanding, women are rarely seen as promising candidates by most political parties and the leaders at the helm. A report on the skewed Math, from interior U.P., as it prepares to go to the polls.

It’s ironic, when you look out at the sea of women of all ages, especially wizened old ones, at a recent nomination event in Banda, Uttar Pradesh, how few women are on the other side of the stage or ballot box. To hear the sharp political critique of policies in their names, the expose of underdevelopment and government hyper rhetoric, the hopes invested in the absent supremo, Mayawati, you’d think that things could really be different if we fielded a large number of women candidates to our houses of parliament.

But reality is generally far from what we desire or what should be. Data from the last general election in India shows that, of 543 seats, 640 women candidates ran for election (8% of the total 8208 candidates, millionaires and criminals included) and 12% of these won (61 women). UP, for its 80 seats in the lower house, fielded close to 90 women candidates. However, only 12.6% of MP in our parliament are women, against the international average of 24.3%. Embarrassingly (yet, not surprisingly), India stands 149th out of 193 countries, ranked for its percentage of women representatives in parliament – behind Bangladesh, Pakistan and Saudi Arabia.

This time around, from data available so far, the percentage of women candidates is still around 8%, even as two prominent parties, Odisha’s Biju Janata Dal and West Bengal’s Trinamool Congress, have announced over 30% reservations in party tickets for women.

The interesting thing to think about, and that we made our way around party offices and rallies and nomination events to investigate, is how women see their increasing presence in party manifestos squaring up with this still poor representation in positions of power in the parliament. Women, especially rural women, have been on billboards and radio jingles, the main protagonists in stories of infant mortality, better cooking facilities, education, love jihad these last five years. But how much say do they have in determining policies themselves? 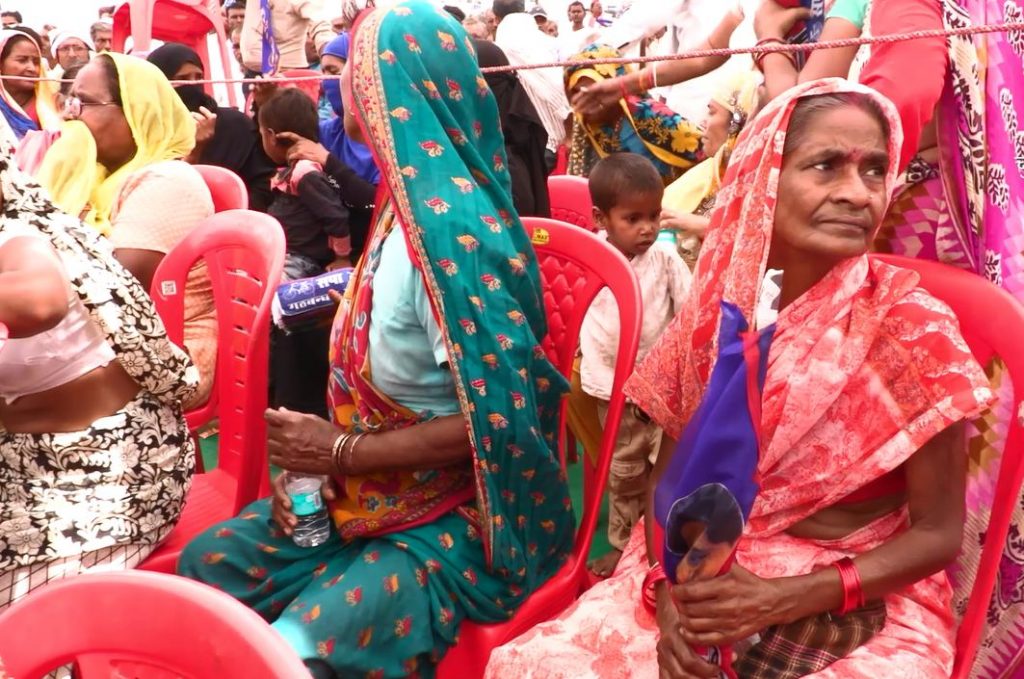 Kiran Yadav, a Bahujan Samaj Party candidate for the last assembly election, says that in her years in Banda’s politics, since the early 90s, she has never seen a woman in parliament from Bundelkhand, minus a few stray ‘neta’s bahus’. “And neither have people’s perspectives on giving women a place or a ticket changed in all these years: no one says women should be given seats. Men have a fear in their minds, since they see that women are more capable than them, that if they give them space, as MPs or MLAs or even district panchayat presidents, they will take away their power!”

Dipti Yadav, a Congress Party worker in Banda, who was part of the welcome team during Priyanka Gandhi’s Benares visit, finds the ladder to positions of power too steep for women. “The problem is that there are too many layers between the panchayati raj institutions and the parliament, and it’s too hard for women to reach there. If there were more women in parliament, they would have more information on policies being made for them, and how facilities they need could be changed or improved. I think it’s really crucial in the current state of affairs, for there to be more women in politics, but I don’t see women being able to establish themselves until the 33% reservation in parliament becomes a reality.”

For some women, the long-procrastinated women’s reservation bill is not enough to change the status quo. For Sampat Pal, long-time politician in Bundelkhand, and Commander of the Gulabi Gang, who made her way into politics via the extra-judicial vigilante route, not enough is being done. Pal has been a many-time candidate fielded by the Congress, though she’s missed the ticket this time to a local ex-SP leader better known as ‘Daku Dadua’s bhai’. She says, “The reservation should be 50%. Women will come out and fight. And men will support them, push them to!”

Off the main chaurahas and streets, deep inside Bundelkhand’s villages, voters had more diverse views on the matter. For Ram Raj, a travelling salesperson who paused on his way out to a busy day, women haven’t been able to establish themselves as political leaders with influence, and that’s a major concern. He shares his strong views on the subject, “They don’t show the ability, they allow men to come to the forefront and they stay behind. They haven’t been able to mobilise as a group, to show others what their rights are. They don’t even know their own rights – who we are, what we want and how are we going to get it.”

Patriarchal realities laced with mansplaining notwithstanding, a Banda local Usha Singh smiles when we ask her about women’s place in politics. “I don’t know of any woman MP from Banda. But I do know that if I was to vote, I would like to vote for a woman MP. Only women really understand women’s issues.”

Saffron, blue, green or yellow, the political establishment needs to chew on some humble pie, if they want to win over a considerable (48%) of the voting population nation-wide.