Winter is Here, Uniforms Not

As the cruel north Indian winters finally start to bid us farewell, school children in the country’s most populous state are yet to receive their “free” sweaters and shoes. Rural U.P. fares the worst.

“Kisi ko nahi mila (Nobody’s got them).” 9-year-old Satyam, a student of the government primary school and a resident of Chilla village in Banda district of Bundelkhand, offers a nutshell view of a lack that is prevalent in the entire state. The Uttar Pradesh government had announced, at the onset of winters, that children attending government primary and upper primary schools would be given winter uniforms for free – the “kit” was to include sweaters, shoes, and a pair of socks. But all through December and now mid-January, unarguably the coldest months of the season, the children of Chilla gaon have been braving the cold in school day after day, in a terrible remake of Waiting for Godot. “We’re shivering in our classrooms”, says 11-year-old Sarita, “but we’ve been coming every day, hoping that the sweater distribution would be on the agenda.”

In the week of the ASER report that has confirmed to us all the abysmal state of state education in rural India at large, the lack of proper clothing should not come as a surprise. Indeed, we have reported on several other lacks in our districts earlier too. Even so, the numbers are shocking: According to a HT news report, the percentage of students in Lucknow, who have received free sweaters, is estimated to be 10%. And when the state’s capital is reeling so, what greets us in rural Bundelkhand becomes the stuff of expected disappointments. 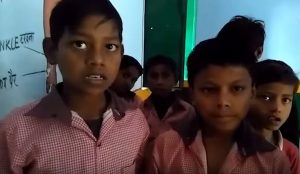 “Everyday, we come to school, hoping that today will be the day that sweaters are distributed.”

A resignation that comes coupled with mild, impotent rage, in the voice of Ramsanehi, the headmaster at Chilla’s primary school, who’s been waiting for the promised winter kits as well. “Half of January has come and gone. The mornings are so cold and foggy. They should be getting these sweaters and socks now.” The village pradhan, Sumedha, raises some angry rhetoric, “These are young children, what if they fall sick?”, he asks, and puts it aptly, “Warm clothing, in this weather, is an essential.” Ramsanehi adapts a sarcastic tone next, “When will these uniforms arrive? In the summers? Garmiyon ka intezaar hai kya?” Meanwhile, Sarita and her girl gang chuckle out loud when they’re asked what they think about that, “Of course, we need them now!”, they chime in unison.

Sourcing and buying responsibilities of the uniforms lie with the school management committees (SMC’s), but in schools in tiny hamlets such as Chilla, these are not so much committees as a one-man/woman show. More often than not, the shiksha adhikaris are expected to be doing the running-around, and in U.P., they have been busy fighting battles more pertinent to them – figuring out identical sweaters for the children would hardly count among top priorities.

The price has been another issue, it seems, with the U.P. government failing to excite suppliers who find the 200-rupee-per-sweater price tag too low – this had resulted in a paucity of tenders. Add to that the numbers – estimates suggest 1.54 crore school-going students in the state – and the lack achieves gargantuan proportions.

When we speak to Mahaveer Prabhari, the local Block Resource Co-ordinator (BRC), he sounds stoic. “They must be on their way”, he suggests, adding, “If they arrive, we will of course have them sent off.”

As the country celebrates harvest festivals that traditionally mark the end of the winters in Indian calendars across cultures, in a small village, the need – and hope – that comes tied up in a pair of socks continues to be pressing. As 8-year-old Ranno says, smiling, “I have been coming to school and attending my lessons in the hope that it would mean getting a free sweater.”

Rally Around for Riya