The Unspoken Dynamics between Seva & Mewa

Khabar Lahariya vox-pops the Adivasi women of a hamlet in Chitrakoot, on the upcoming elections

Bargadh village in Mau tehsil in Chitrakoot is large and bustling, especially for a town on the edges of the national conscience. It takes two hours of jerky road time to get here from the district headquarters if your bus doesn’t break down. It often does, though.

Of Chitrakoot’s population of close to 10 lakh and 1.5 lakh households (as of census 2011 data), over 36,000 are scheduled caste, and Mau tehsil is home to almost 8,000 of these households. Bargadh alone, with its population of 7,000, has an SC population of 1,500, of which a large proportion are Adivasi Kols, also categorized as SC (and not scheduled tribes) amongst Uttar Pradesh’s teeming disenfranchised masses.

Over 50% of these SC households are landless, and depend on daily wage labour for subsistence. 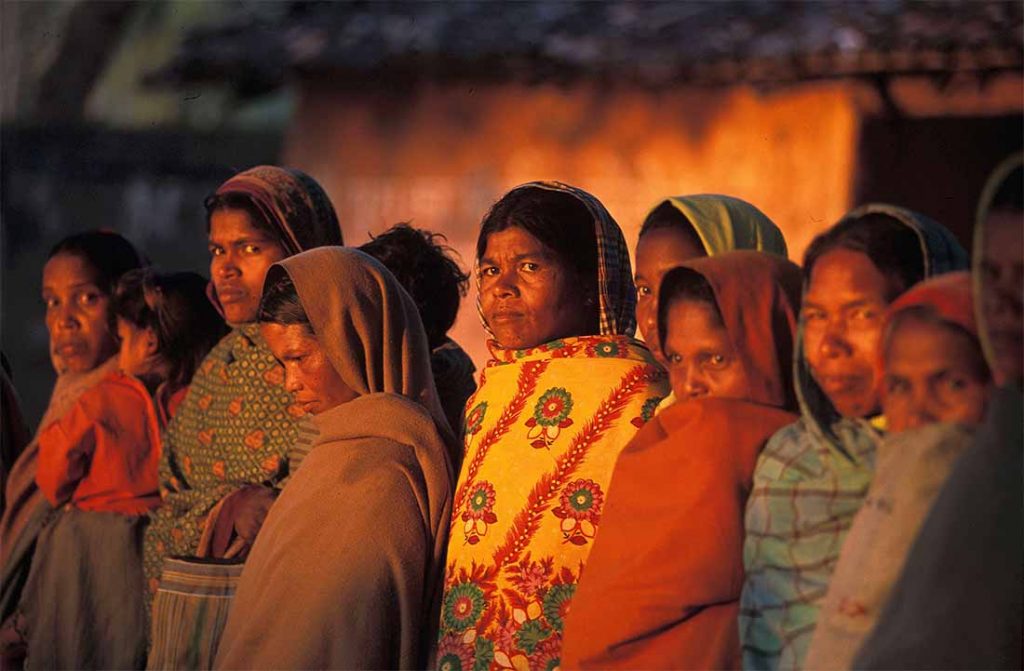 Khabar Lahariya spoke with Kol women in just one hamlet of Bargadh documenting their views on the upcoming Lok Sabha elections, and specifically on how welfare schemes over the last five years had improved their standard of living. These women largely gather wood from the nearby jungles that they sell to make a living. Rising at 3 am, they complete their meager sales by noon and return for other work. This hasn’t changed in decades, not even in the sabka saath sabka vikas focused ‘less-government-more-governance’ style of the Centre or state governments. Homes in this hamlet are still mostly kaccha; children are running around out of school, with distended bellies; while the women are hard-pressed, politically astute, and very angry.

It was just about getting warm in Vinobhanagar when we arrived, but women from ages ranging from 20 to 60 drew up their saris, their children and grandchildren, to dissect the government’s performance, and their chances at a re-election.

“Of course we’re going to vote for a new government,” starts a young, articulate Sunita, “We want houses, and electricity, and land. If we have to stay in the dark, eaten by insects and scorpions, our children unable to study, why will we vote for this government?”

“Mayawati and Mulayam Singh are the only ones who have been able to do something for us: money for our girls to complete high school and intermediate, cycles for them, money for their marriages. This government has given us no benefits, only trouble. Let’s see if they give us ST status, then maybe we’ll bring them back,” adds Nirmala.

60-year-old Nirmala is keen to talk about how the highly publicized schemes in this government’s stint have worked out for her. “Well, I opened the bank account that they asked us to, but never got a single rupee in it. I’ve got a gas cylinder I can’t afford to refill. They keep saying it’s free and I’ll get money to refill it – but where’s the money? They’re telling us they’ll put lakhs onto a card for health, and then they’re pouring lakhs of money into the Ganga and Yamuna. Wouldn’t it be more useful just to give a little of that money to me, into my non-functional bank account? Maybe then we’d be able to afford healthcare, or the marriages of our children.”

Keshkali, amused cynicism lacing her toothy grin, puts it better than anyone could, “The government who works, and services the poor, that government will reap rewards (mewa, is what she said, translating to the richness of dried fruits). When they haven’t served us, why should they get any share of the mewa? Seva se hi mewa.”

This impact story is part of our initiative to serve as the platform that gives women a voice these Lok Sabha elections. If you like the report and the reporting, do consider pitching in on our crowd-funder with a mandate to do 100 such impact stories.

In the Bovine Belt: A Photo-Essay on the Hinterland’s Cows