‘Sir, What About Last Year’s Compensation?’

द्वारा लिखित खबर लहरिया April 27, 2015 16 बार देखा गया
Nature has not been kind to the farmers of Mahoba district in recent years. The memory of one disastrous season barely seems to have faded before the next season, and another shock, another flattened crop.Administrative delays over disbursal of compensations after the current agricultural crisis in Bundelkhand and other parts of north India, only serve to highlight the frustrating plight of farmers, and the constant fragility of their livelihoods. The wait for compensation for the damage from the unseasonal rains this spring is only a continuation of a long history of of losses not acknowledged or compensated by the state. 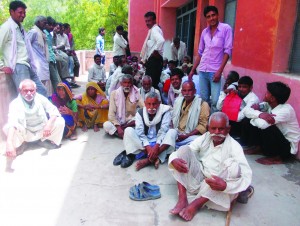 Mahoba. In Budhaura village, scored of farmers alleged that they hadn’t been compensated for crop losses incurred due to hailstorms that happened last year. ‘A number of villages were affected by hailstorms and rainfall last year in February. It took more than 6 months but eventually farmers in many of these villages received cheques from the administration, but not us,’ said Ramcharan. After this year’s crop failure, Ramcharan is one of the many farmers who has been driven to a point where food has to be arranged on a day to day basis.

‘I don’t understand how farmers from villages adjacent to ours have received cheques but somehow we are either not eligible or have been forgotten by the administration,’ says a frustrated Maiyyadin. ‘The lekhpal (who measures farmers’ losses and recommends their names for compensation) had assured us that compensation would arrive. We’ve waited more than a year now and the lekhpal too has been transferred. Who are we to go to?’

A group of about 50 farmers from Budhaura have made several trips to the Tehsil and submitted an application to the District Magistrate’s office but no action has been taken on the matter. ‘We have been assured of a proper investigation into the matter but how does that help given that another unsuccessful season has just gone by?’ asked Sunderlal, who has been making regular trips to the offices of the administration.

In Mawaiyya village, 21 bighas of land and the compensation for it are now under dispute. Prakash, Zalim Singh, and Gopal have alleged that they had leased out the land to Nandlal only last year and now despite losses no one has received any compensation even as cheques in their village have been distributed. ‘Land owners are to get compensation for the crop that was lost. We have given an application to the tehsildar and are awaiting action,’ said Prakash. However, the Tehsildaar said that the land was under dispute and so no compensation would be paid.