Rs 500, 10 sacks of sand, and two sacks of cement: What villagers near Varanasi are being given to build toilets

Can you produce a functional toilet with just Rs 500?

If this sounds like a possible game show idea, in Varanasi district’s Jairampur village–bang in the centre of the Prime Minister’s constituency, and on the Prime Minister’s pet scheme—this is an uncomfortable and impractical reality. Around 350 toilets were supposed to be constructed in the village of 751 households, under the BJP government’s Swacch Bharat Abhiyan. As per this scheme, Rs 12,000 is meant to be provided to beneficiaries for the construction of these toilets. However, residents—not just of Jairampur, but of numerous other villages in the district—have claimed that not only are they not being given the money, they are given construction material in lieu of money, and this is not adequate for they were given merely 500 rupees for the construction of these washrooms—this, in spite of the budget of 42 lakh that has been allocated for the construction of toilets in Jairampur.

Says an agitated Manju Devi, one of the residents who had a toilet made under the scheme, “We don’t get the full amount. So far we’ve been given only Rs 500, 10 sacks of sand, and 2 sacks of cement. Everything else we’ve arranged for on our own. I’ve invested my own money for the bricks and everything else. I paid the labour charge, bought the additional cement, sand, almost everything. Not a single penny was reimbursed! Whenever I ask them for money, they say that their department hasn’t sent them funds, because of which they can’t pay us.”

Soni, another resident of Jairampur, brings another dimension to light, which also points to a possible nexus between multiple power-brokers in the village. “We can only get the toilet constructed when the entire amount is paid to us. But the kotedaar (who distributes ration) and the pradhan said that if we don’t construct the toilets now, he will stop giving us our rations. But again, we can only construct the toilet once we get all the material. Otherwise, how is it possible? Even the rations are distributed in a haphazard, confused manner. Half 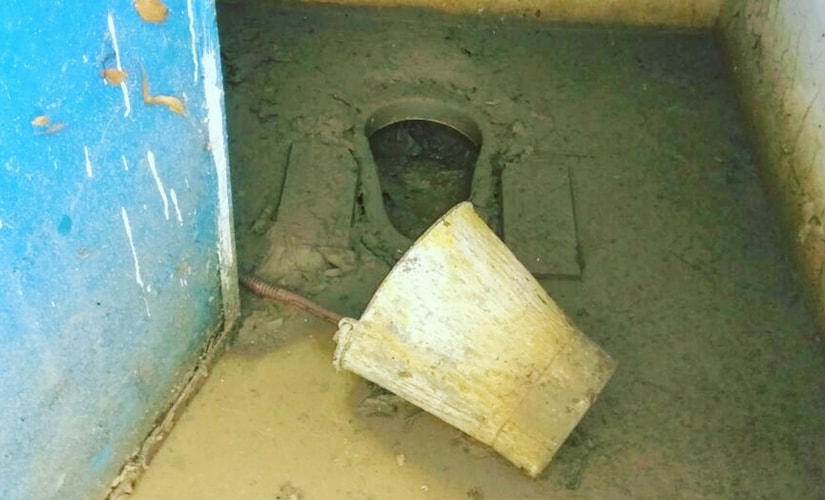 When we spoke to Mahesh Yadav, the representative of the pradhan, he snapped, “I can only provide them with the money that has been given to me by the government. We were promised Rs 12,000 and our Secretary has told us to provide 850 bricks. But when villagers take more than this, then where am I meant to provide it from? We are giving them sand and cement. But Rs 12,000 is not enough to provide them with everything. Whatever amount is left over, I have to pay for it. Have they made me the headman for this? I thought I was elected because of popular support and love.”

Chandra Prakash, Secretary of Jairampur panchayat is convinced all is well, and that everything is going according to plan. There is no reference to the huge discrepancy in money being provided, or materials being provided in lieu. He rattles off the official report, “In all, 350 toilets have to be constructed. So far, 125 have been completed, and 15-20 are still underway. The construction has been underway for the past week. The entire process began six months ago. We were promised 42 lakhs for the construction of 350 toilets. It’ll probably take us a month, month and a half more to finish.” In January, when we spoke to Ravindra Kumar Singh, the Assistant Development officer of Chiraigaon, the block in which Jairampur also falls, about a similar case of inadequate material being provided in lieu of money for toilets, he said that he was aware of ‘discrepancies’ and his whole team was investigating these. Officials claim, off camera, of course, that villagers do not use the money provided for the toilet construction, but whittle it away in drink and so on. And so, material is provided in lieu of cash. It is unclear where and how this decision gets made. What is clear, however, is that it sets up a pretty nexus between the sarpanch/pradhan, contractors and other petty officials, where money is held and material is sourced, commissions are paid. And residents—especially in the poorest mohallas, like Jairampur’s Dalit basti—are suffering under the centre’s ‘development’ imperative.

Clearly, this is a case of a scam you can smell miles away. Khabar Lahariya will be investigating it further over the next few weeks.

This article was first published on Firstpost